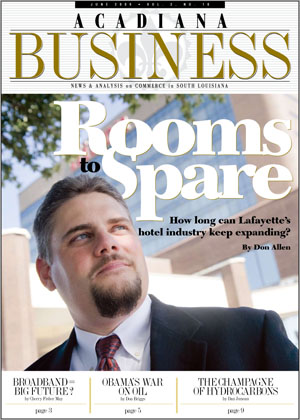 The hotel boom in Lafayette may be at an end. With three more facilities recently opened in the Kaliste Saloom area — Staybridge Suites, Wingate by Wyndham and Holiday Inn Express & Suites — and a dozen more in the planning or refurbishing stages, one might think that the end is nowhere in sight for Lafayette’s hotel industry.

Not only is it in sight, says one local hotelier, but it may be just around the corner.

“We’re already there,” says James Thackston, general manager for Lafayette Hilton and Towers. “I know it’s probably too late for everything to be stopped, but the people who haven’t started construction yet probably won’t.”

The nationwide recession in general and its effect on the oil and gas industry in particular bears much of the blame for the apparent downturn locally. Rig counts are down, and layoffs and hiring freezes are certainly no secret in the oil industry. Less movement in the oil fields means less traveling and expensing.

“What most people don’t realize is that 60 percent of our [hotel] business is oil and gas people,” says Thackston. “Everything pretty much turned off in March, and April and May have been worse. Occupancy at the Hilton is about 12 percent off from last year at this time, and the overall rate in the area is probably down at least 20 percent.

“It’s the worst time I’ve seen in the more than seven years since I took over [at the Hilton]. I began here right after 9/11, and it was nothing like this.”

Thackston, who began representing the Lafayette Chamber of Commerce as a board member to the Lafayette Visitors and Convention Commission three months ago, says the Hilton hasn’t suffered any layoffs yet, but there are at least a dozen needed positions that haven’t been filled either. While he hasn’t heard of any layoffs at other Lafayette hotels, he notes that the industry is one of high turnover by nature, so layoffs could be difficult to track.

“My own take on it is that the Go Zone has resulted in an overbuilding of certain products like multi-family dwellings and hospitality venues,” says Robert Daigle, developer of River Ranch. In recent years Daigle opened The Carriage House, a 21-room high-end facility near the City Club, and has plans for a larger boutique-style hotel in the area. “A lot of the products were driven by the low-interest bond money and the special depreciation. In any event, I think you had a lot of people who were more enamored with the tax breaks than they were of whether the market could justify another property. So I think you have an overbuilding on the multi-family side and an overbuilding on the hospitality side.”

The Gulf Opportunity Zone Act of 2005 was passed by Congress to help the affected counties in Alabama, Mississippi, and Louisiana rebuild after hurricanes Katrina, Rita and Wilma. It provided investors and developers with tremendous tax incentives as well as bonus depreciation incentives. While the Go Zone ended at the beginning of 2009, many developers took advantage of the act in the months leading up to the deadline and most, if not all, of the recent hotel construction was based on this incentive. Since it takes about eight months to plan a hotel property and secure permits, and another 12 months to complete construction — not to mention that Lafayette was considered to be a “hot” area for hospitality venues — it probably seemed like a good idea at the time.

While no one counted on a recession, few events will impact the Bayou State’s economic culture like a major storm. Hurricanes Katrina and Rita, devastating to south Louisiana, made landfall just a month apart in August and September 2005, and the effects are still being felt in the construction and tourism business. The 2007 Tourism Satellite Account provides accounting measures for tourism and travel; in a report delivered to the Louisiana Department of Culture, Recreation and Tourism by LSU’s Division of Economic Development, results showed that “travel and tourism spending peaked at over $10.6 billion in 2004 before falling to $8.6 billion in 2005 and $7.5 billion in 2006. In 2007, the second full year after Katrina and Rita, the state realized a significant rebound to $9 billion in visitor spending.”

Then came the recession.

“The return on investment for a Lafayette hotel has always been very good,” says architect Kirby Pécot. “At one time, hotels were making over 20 percent on their investments. Decisions to build were made when the market was very good.”

According to the LCVC, Lafayette Parish collected more than $2.7 million in 2007 for lodging tax and $3.1 million in 2008. While the first three months of 2009 collections (reflecting December, January and February sales) were more lucrative than the previous two years, there was a noticeable 12 percent drop in April collections (March 2008 sales compared with March 2009 sales). Even with more hotel rooms available in the area, lodging tax collections in April were still down more than $34,310 from the previous year and off by $4,600 from 2007. That decline means the year-to-date total for hotel sales during the first three months, compared with business generated from January to March 2008, is now off by about $15,000 — or 21 percent. It’s important to note that tax numbers from the 2009 Festival International, late April’s successful event that may give the numbers a boost (thanks to near-perfect weather that kept all tourists in town), won’t surface until the June report comes out.

“The festival was outstanding,” says Thackston. “I could probably attribute 200 rooms to that event.”

Lower rates are great for the traveler but not so great for the hotelier. “[While] we’ve tried hard to hold on to our rates, when other hotels drop theirs, it pretty much forces us to match,” laments the Hilton GM.

The combination of lower rates and a drop in occupancy is never good news for some hotels, and there are more than 70 hotels and motels in the Lafayette area already. Even with that many choices for travelers, however, the area has only two full-service hotels among its 62 LCVC members: The Hilton and the newly refurbished Crowne Plaza (a franchised hotel licensed by InterContinental Hotels Group, a network that includes 10 area hotels, among which are the three new hotels on Kaliste Saloom Road, the Holiday Inn Express, Staybridge Suites and Candlewood Suites), separated by the Vermilion River on Pinhook Road. The former Hotel Acadiana officially became the more upscale Crowne Plaza April 9, according to Caroline Sanfilippo, an IHG spokeswoman. The project was plagued by construction and permit difficulties and the subject of “Uneasy Lies the Crowne ” (Acadiana Business, Feb. 24, 2009).

Randy Bradford, who replaced Mark Arnold as general manager in recent weeks, did not return phone calls seeking comment for this story.

Daigle, who opened the Carriage House in River Ranch and is in the planning stages for the larger, more expansive Inn at River Ranch, a 90+ room facility, isn’t ready to hit the panic button quite yet. “We’re about halfway through the architectural-design stage and unless [the market] does something drastic, I expect we’ll continue as planned.

“Now, if it gets worse, might it effect the start-up date? Yes.”

Daigle acknowledges that the Carriage House, despite its uniqueness and the draw of River Ranch’s amenities, has also seen a small drop in business the past couple of months. Still, the numbers are only slightly off from where he hoped they would be at this time.

There are a dozen or so new hotel properties planned or under construction, according to LCVC:

• Gulf States Real Estate is planning to build the new Ambassador Metroplex behind Charley G’s restaurant, with 175,000 square feet of office space and a 110-room hotel

• Studio 6 Hotel next to Comfort Inn on NE Evangeline Thruway

“I think as the numbers become known, [developers] will look at other markets,” remarks Pécot. “The problem is, there aren’t that many markets that aren’t flat. The guys who got in first are much better off than the guys who got in later.”

“I just don’t know if the next six or eight [planned projects] will happen,” agrees Thackston. “I don’t know if financing will make it happen.”