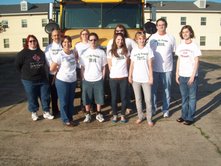 A group of supporters of the philosophy degree program at UL Lafayette failed to sway the Board of Regents to reverse its decision to eliminate the program today. The students and supporters boarded a bus this morning in the Oil Center for the journey east. Senior philosophy major Anna Beggs delivered a five-minute pitch to the board on behalf of the program

UL’s philosophy program was one of several in the University of Louisiana system eliminated in April by the board, which cited a low completion rate. A handful of other degree programs at UL are now in a three-year probation period.

"It has been a low completer for a long time," Beggs acknowledges, "but one of the mistakes that the board is making is that the enrollment in the philosphy program is now at an all-time high. So we have been recruiting many more students. And now that the program has been eliminated, no more philosphy majors can join. That's what we're really upset about."

Beggs and fellow philosphy major Laurie Guilbeau, also a senior, say the regents were cordial and listened attentively to the presentation. According to Beggs, the thurst of the regents' response was that they felt overwhelming pressure to eliminate the program due to system-wide budget cuts called for by Gov. Bobby Jindal's administration.

More than 430 people have joined a Facebook group — Bring Back the UL Lafayette Philosophy Program — to share ideas on how to save the program and to offer mutual support. As it stands now, the UL philosophy program is on a morphine drip that will expire in four years. After that, no more philosophy degrees. But Beggs is hopeful the program can be revived."Especially if we keep on showing interest and taking progressive action to keep it a topic," she says, "then hopefully they can't ignore us for too long."