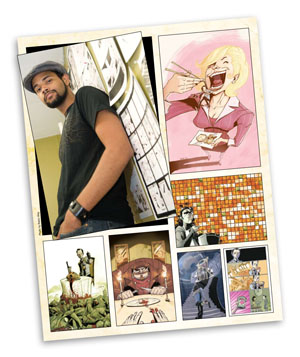 Rob Guillory is breathing some pretty rarefied air these days, and he doesn’t have to leave sea level to do it. The 27-year-old Carencro native and UL Lafayette grad is a professional comic artist — definitely not a dime-a-dozen occupation — and he gets to stay in his home parish to do it, make his own hours, and earn an honest living doing what he loves. Dude hasn’t worked a day in the last year and a half since he went pro. Just ask him. Boom!

Today in bookstores and comic book shops far and wide, Guillory’s first big project, “Chew,” debuts. “Basically it’s like my big coming out party,” says Guillory, whose work has dotted the comic firmament here and there. But “Chew” is a regular gig, long-term, the kind of work that helps an artist like Guillory jump a rung or two on a very competitive ladder. Boing!

“Chew” follows, in monthly 22-page installments, the exploits of one Tony Chu, a government agent with a special extra-sensory gift in a post-pandemic world of conspiracy theorists and conspiracies. You know, standard comic book stuff. “It’s kind of out there,” Guillory says of the story, “a dark humor, sci-fi kind of thing.” The story is written by San Jose, Calif., writer John Layman, a Marvel and DC Comics veteran. Guillory takes Layman’s scripts and makes them rumble. Whack!

Guillory starts a page the old school way: He sketches it out and renders it by hand. From there it’s onto the scanner, into the computer and the magic of Photoshop where he can layer the drawings in color and depth and imagination. But the drawings — Guillory’s have a classic, studied feel to them; the man has obviously read his share of comics — begin the way comic book drawings have begun since the dawn of the medium. No fancy tricks. Just an artist with pencil and pen, and the ability to extract the fantastic from this mortal coil. K’pow!

The first issue of “Chew” — simple ink and graphic drawings on multiple pages — covers the west wall of Guillory’s small studio above Downtown T-Shirts at the corner of Lee and Vermilion across from Don’s Seafood and Steakhouse, which is celebrating the 75th anniversary of its founding in 1934, the same year the first comic book was published in the United States. Bam!

Purchase a debut copy of “Chew” in bookstores and comic shops across Acadiana for $2.99. Learn more about the series by logging on to www.chewcomic.com . Get to know Rob Guillory at www.robguillory.com .