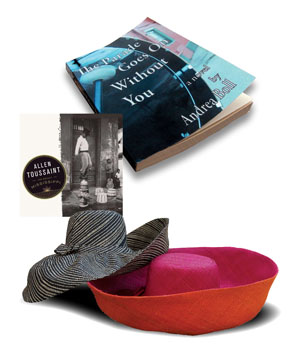 MADE IN THE SHADE
No doubt about it, bigger is better for summer 2009 straw hats. These wide brim hats are selling like hotcakes at Little Town — so much so that the Oil Center store has already restocked them three times since March. The wide brim offers lots of flexibility in how you wear it, and don’t worry too much about seeing your hat on your neighbor’s head: they come in every color under the rainbow (the duo colored ones can be reversed), as well as numerous patterns (the black and tan striped is my favorite). They’re terrific with a sundress and will do double duty on the beach or at the pool — keeping you perfectly shaded and superbly fashion-forward. And they pack well, too. Just roll it up sideways (ask the staff to show you how) and secure it with a ribbon or soft ponytail holder. Contact Little Town at 268-9499. — Leslie Turk

CLASSIC COMEBACK
It’s generally hard to get excited about an album of classic blues and jazz covers. At first glance, you might think New Orleans pianoman Allen Toussaint’s latest belongs in that bin of forgettable records that sound like a good idea, until you listen to them, once. (See the recent album by Willie Nelson and Wynton Marsalis. Sorry guys.) But on The Bright Mississippi, the 71 year-old Toussaint brings amazing clarity and new energy to early jazz classics by masters including Louis Armstrong, Jelly Roll Morton, Django Reinhart and Theolonius Monk, among others. Sparse and soulful, the album soars from the interplay of an all-star cast of varied musicians, including New York guitarist Mark Ribot, known best for his work with Tom Waits and Elvis Costello, as well as the prolific drummer Jay Belarose and legendary trumpeter Nicholas Payton, the only other New Orleanian aside from Toussaint in the band. The Bright Mississippi is available at all major music outlets. Streaming audio of the band’s recent show at the Village Vanguard is also currently being featured on NPR’s Web site, as part of its online live concert series. — Nathan Stubbs

CATCH THE PARADE
In her debut novel, The Parade Rolls on Without You, Andrea Boll takes you inside New Orleans’ storied neighborhood secondlines with Blue, the bass drummer of the Revolution brass band, and Luna, the “danciest white girl at Vaughan’s.” As their tangled relationships evolve and devolve, Boll gives a rare unfiltered view of New Orleans and its music culture, revealing the soul, passion and underlying social divisions that shape life in the city. The Parade Goes On Without You retails for $15 and is available at Barnes and Noble or online through nolafugeespress.com . A portion of the proceeds go to The Roots of Music, a nonprofit dedicated to supporting middle-school music education in New Orleans, with the goal of assembling the city’s largest youth marching band. — NS