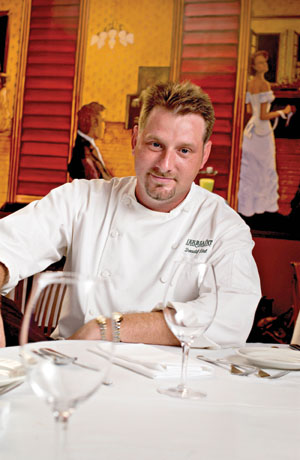 Call it Cajun confidence. About six months after Hurricane Katrina tested New Orleans’ will to live, when just about the only tourism in town was bus jaunts through the lower Ninth Ward that fed a morbid curiosity, Chef Donald Link opened a restaurant in the Warehouse District. Four years later, Cochon — French for pig — remains a wildly popular destination for southwest Louisiana cooking. It is the K-Paul’s of the 21st century and a perfect complement to Link’s  other eatery, the French bistro-style Herbsaint Restaurant.

That Link would open a new restaurant so soon after Katrina, when New Orleans was more Big Queazy than Big Easy, was a shout out for his adopted city. “We started construction before the hurricane,” he explains. “We could have gotten out of it. We would have lost some money, but it wouldn’t have been a devastating ‘break me’ loss at that point. It was more making a statement. If this was my plan before the storm — to do another restaurant — what am I saying by not doing this? Am I saying the city’s not going to come back? That it’s not worth investing in? And I honestly didn’t feel that that was the case.”

Two years ago, the James Beard Foundation, renowned for its discerning institutional palate, named Link the best chef in the South and nominated Cochon as best new restaurant. That followed a string of accolades for Herbsaint, including a top-10 ranking by the Times-Picayune and placement among America’s top 50 restaurants by Gourmet magazine. Success breeds success: Link’s new cookbook, Real Cajun, is the top seller in the Cajun category on Amazon.

Link is a descendant of the Zaunbrecher clan that settled rural Acadia Parish 125 years ago in what is now the Roberts Cove area north of Rayne. Germans surrounded by Cajuns. He grew up at the knee of his Cajun-cooking grandfather, cut his teeth as a teen in an Iranian-owned Mexican restaurant, and earned his apron in the heady culinary crucible of San Francisco in the ’90s, where he also attended the California Culinary Academy, before returning to Louisiana in 2000 to open Herbsaint with New Orleans restaurant icon Susan Spicer. At Cochon, and in Real Cajun, Link returns to his rouxs.

Cochon has its own in-house boucherie where diners can get fresh-made boudin, tasso, andouille and other Cajun delicacies. “People used to ask me [before Cochon opened], ‘Where can I get some Cajun food in this town?’” Link recalls, “and my answer always was, ‘Get a car and drive about two hours west of here.’”

Real Cajun covers the gamut of southwest Louisiana cuisine — from staples like seafood and pork, to dishes that are basic Cajun with a gourmet twist. There are recipes for stuffed crabs and jambalaya scattered around baked oysters with Herbsaint hollandaise and crispy soft-shell crab with chili glaze and mint coleslaw. Mon dieu!