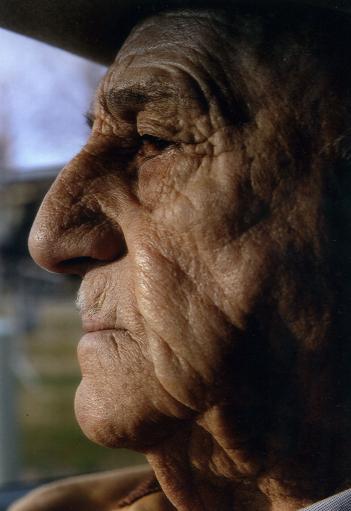 A funeral service today at Martin & Castille funeral home in Lafayette marks further closure on one of the richest chapters in Acadiana history — the bush tracks. Through a large swath of the middle of the 20th century, these unregulated, unlicensed horse-racing tracks produced a crop of Cajun jockeys, many of whom have risen to the top of the sport. Claudius Broussard, who died Saturday, owned and operated one such track — along with a bar and a cockfighting pit — on a piece of land along E. Broussard Road off Johnston Street. When the track opened, it was closer to Milton than to Lafayette, which was still a shimmer on the northern horizon. The starting gate at Broussard’s track, now rusting into oblivion, can still be seen off the road near the McDonald’s.

“He was a good man,” recalls Melba Broussard, Claudius’ wife of 44 years. “If he could help somebody he would.”

Claudius Broussard opened his track in 1950 and operated it until the mid 1980s. Races were held on Sunday afternoons; 200 people on an average day, up to 2,000 when wealthy out-of-towners brought horses and big money through Cajun country. “I worked like horse, but it was fun,” Melba recalls with a chuckle. “I had to sell beer to make money.”

Early on, most jockeys at Broussard’s track — and every bush track — were boys, including his son, Daniel Broussard. “All them boys were about 60 pounds, 70 pounds,” he remembers, “and whenever they’d do match races, like 90 pounds, my daddy, whenever we’d get to that point, he’d put a chain around me to get a little bit of weight to run. So we’d all be about the same weight.” 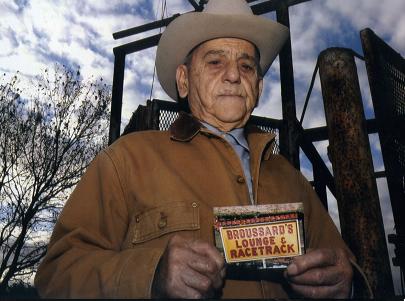 bush track phenomenon. “It had got to where near the end of a bunch of the bush tracks they were making the jockeys sign a waiver, and the lawsuits just got really bad on a jockey falling or something like that. Back in the old days, what they’d do is, somebody fell off a horse, everybody’d all get together, throw a benefit or something, raise money for them and all that. Now, a guy falls off a horse, I’ll sue you, you know?”

Acadiana’s bush tracks are legend and lore in south Lousiana, and many of the sport’s top jockeys — Eddie Delahoussaye, Kent Desormeaux, Calvin Borel — got their start on the tracks. Louisiana’s bush tracks were the cover story for the January 2208 issue of The Blood-Horse, one of the sport’s premier publications. And Claudius Broussard and his track in south Lafayette Parish were focal points:

Horses arrived in vans, dump trucks, and cross-tied to flat-bed trucks, then disembarked by stepping of onto a mound of red clay. Saddles were piled next to the juke box. Picnic baskets full of smoked sausage and boiled crawfish. Kids running around the snowball stand. A can of beer cost 45 cents. A soft drink and a full bag of chips went as a combination for two bits.

... From the food and drink concessions, Broussard gave a percentage back to the horsemen.

“We didn’t get rich,” he admitted, adjusting his hearing aid, “but it put bread and milk on the table. At my place, even if a man lost a race, he could still walk out with a sack of feed on his shoulder. You could tell if a family was squeezing a dollar. They would carry an ice chest in with their own drinks and sandwiches. I’d just look the other way.”

Broussard crossed the finish line Saturday, the same day two Cajun jockeys who, according to his obituary, owe at least part of their success to Broussard — Desormeaux and Borel — squared off in the Belmont Stakes. Desormeaux on the unheralded Summer Bird won the race, denying Borel, aboard Kentucky Derby winner Mine That Bird, a personal Triple Crown. “He knew all them old boys,” says Daniel Broussard.