God bless the Times-Picayune. I was doing my morning quick scan of the state’s papers. Nola.com, the TP’s Web site, came up on my computer screen. First I did a double take, then I looked at the date to see if it was April 1 or some cousin of April Fools Day. Nope. It was just a too-good-to-be-true opportunity for the New Orleans paper to use a photo from their archives.

The story is that four of the state’s former governors are expected to gather in the capitol today to lean on Gov. Bobby Jindal to restore funding to the state’s universities. And that’s who’s pictured, four former governors, sitting in a row in what looks like a legislative committee room. But get a gander at who’s there. In between former govs Buddy Roemer and Dave Treen is our favorite incarcerated politician, Fast Eddie himself, decked out in a sleek Italianate black-on-black suit, shirt and tie. 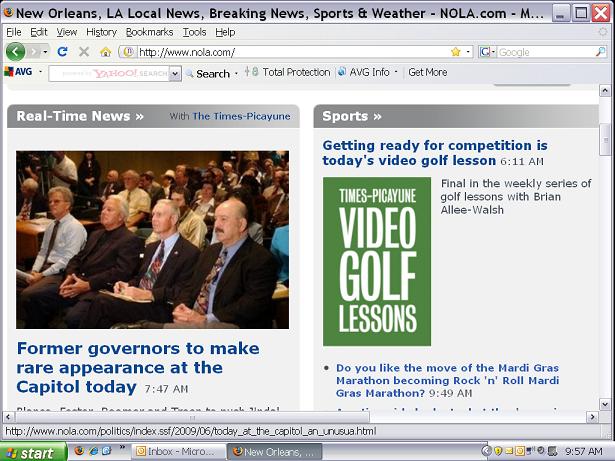 He looks great. I wanted him to be there. If anyone can find the cash and fast talk Jindal into finding a way to restore budget cuts, it’s Edwin Edwards. Alas, read the caption under the photo. It’s a 2002 image, Edwards is still locked up and former Gov. Kathleen Blanco will be sitting in his seat today. I hope the foursome succeed in convincing Jindal that education is the key to our future. And thanks, TP, you made my day.