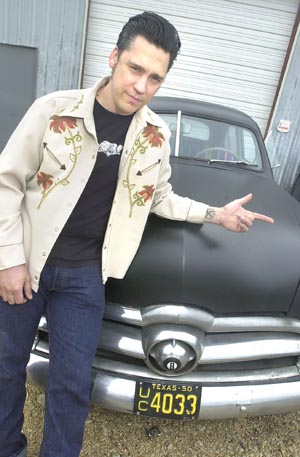 Jesse Dayton is a Texas country boy who grew up with a tumbleweed tied to his ass and a horseshoe glued to his bunion. He sang about  the pain involved with both, late at night, with the soft glow of Beaumont mini-malls and UFOs shining in the distance.

With a gang of twang wrapped up in his genetic disposition, Jesse’s brand of country music has been labeled turbo country. Dayton was raised on a high-carb diet of blues, Cajun, and punk, but eventually graduated into the full-blown rockabilly of The Road Kings and the Alamo Jets.

Built like a Sherman Tank with the same amount of horsepower, Dayton has been putting out a lot of records in the recent past. From his 2004 album Country Soul Brother to the faux greatest hits album Banjo & Sullivan: The Ultimate Collection 1972-1978, Dayton has been grinding out genuine, non-cheese-filled southern-refried honky-tonk, rockabilly, and soul-folk. New for 2009 is Jesse’s full length album as Captain Clegg & The Night Creatures for Rob Zombie’s new Halloween movie, “H2.”  Jesse composed, produced, and recorded an entire record of tunes, some of which appear in the movie.  Jesse also appears in the movie as Capt. Clegg.  Jesse Dayton will play the Blue Moon Saloon Saturday night. Opening the show will be local gypsy swingsters The Saint St. Aces.