Louisiana makes its bid for the 2014 Congrès Mondial Acadien 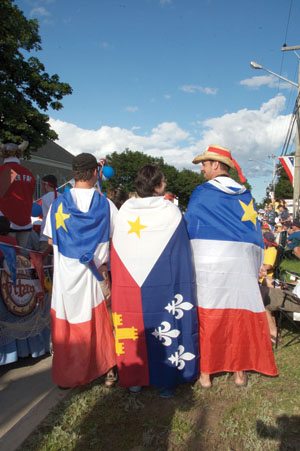 Louisiana visitors to New Brunswick show their colors – the flags of Acadie and Acadiana.

Ici, on est fier de parler français. That pride in our French heritage, along with a clarion call that our language is as fragile as our wetlands, is the essence of Louisiana’s bid to host the 2014 Congrès Mondial Acadien. The Congrès Mondial Acadien is a reuniting of the scattered families of Acadie — the French settlers of eastern Canada, who were driven from their homes by the British in 1755. While the towns of the Acadien Peninsula in New Brunswick, Canada, ramp up for this August’s CMA, other Francophone locales are putting their final touches on presentations for a committee of judges, who will choose where the descendents of Acadie will gather in another five years. Louisiana is competing against Québec, and an international region named Acadie of Lands and Forests, that groups Northern Maine, Northwestern New Brunswick and a small part of Eastern Québec.

Judging for Louisiana will take place June 22. The state’s steering committee, Louisiane-Acadie, is planning a mini-festival, a little taste of why Acadiana should win the bid. Beginning with a talk at the visitor center at Longfellow-Evangeline State Park, judges will experience what Cajuns do best — pass a good time. There will be a Fête de famille, (a mini family reunion) with genealogy exhibits, and a French table where people can come together and speak French. Fires will light under a cochon de lait, fiddles will strike up and dancers will hit the floor. “It’s not so much about tourism,” says Elaine Clément, Louisiane-Acadie vice-president and CODOFIL Community Outreach Director, “as inviting the judges to experience us as we are.”

Aside from the cultural value, there are economic engines driving the bid process as well. Travelers to the state are expected to spend in the neighborhood of $15 million. Once activities begin, the economic spin-off is calculated at nearly $70 million. Lafayette Convention and Visitors Commission Executive Director Gerald Breaux has been championing the bid process. “I feel that if we are successful in being awarded the Congrès, it will have dramatic impact on South Louisiana as a true destination for those visitors interested in a true culturally experience in North America.” Clément attended the first Congrès Mondial, held in New Brunswick in 1994. “It was almost like a surprise,” she says. “Our history is that we were separated — there was a genocide and we were thrown all over the world. The Congrès was like being reunited with siblings that have been separated since birth.” And it happens every five years. “There’s something powerful every time we get back together,” says Clément.

That first gathering in 1994 was centered around a five-day academic conference held at the University of Moncton. According to Clément, hardly anybody went to the conference, but dozens of family reunions spontaneously sprung up. “They had 3,000 people show up at the LeBlanc reunion,” she says. “It wasn’t only that people looked like you; we share a way of looking at the world, a sense of humor, a way of interacting. It was like being with my family.”

Louisiana hosted the 1999 reunion of the Acadian families, and again, it was a totally new experience for the Cajun descendents of the Acadians. That first time in Louisiana, people didn’t know what a Congrès was, but they did know how to throw a party for their cousins. There are more than a million people of Cajun descent, the largest concentration of Acadians in the world, in southwest Louisiana. Even so, many Cajuns had no knowledge of their family lines. “You look at the Moncton phone book. If you leave off the “x,” the names in it look just like the names in the Lafayette phone book.” The connection that was forged between Acadie and Acadiana grows stronger every year.

This time around, the Louisiane-Acadie committee is trying to grow the Congrès, bringing in a younger generation that has come of age through the French immersion programs in local schools or honed their French at St. Anne University in Nova Scotia. “We want to use the energy of the Congrès to grow our community and move us forward,” Clément says. “The purpose is to get like-minded youth together who share a love for our heritage,” says Lucius Fontenot, “and to let us see we’re not as few as we think we are. We usually gather at the Blue Moon once a month.” Fontenot, a partner in Valcour Records, studied at St. Anne, and is deeply involved in French cultural actives in the community.

The young group brainstormed programming ideas for the bid. Its contribution was born out of a popular event, also created by the younger generation of Cajuns. The Camp du Cajuns, a part of the presentation on the 22nd, will be a camping-RV setting for travelers that offers inexpensive lodging. Like the popular Black Pot Festival, brainchild of the Red Stick Ramblers, the Camp du Cajuns, if Louisiana wins the bid, will offer music, dancing and jam sessions each night of the Congrès.

Louisiane-Acadie is asking the community to give it a hand with the presentation. Anyone who would like to participate in the mini-festival is invited to join in between noon and 3 p.m. June 22 at the Longfellow-Evangeline State Park in St. Martinville. For more information, call 291-5489, or email bid director Rachelle Dugas at [email protected] For information about this year’s Congrès Mondial Acadien in New Brunswick, Aug. 6 to Aug. 23, visit the CMA Web site at www.cma2009.ca or www.tourismnewbrunswick.ca