The Acadiana Mudbugs vie for the public’s attention — and dollars — in inaugural season. 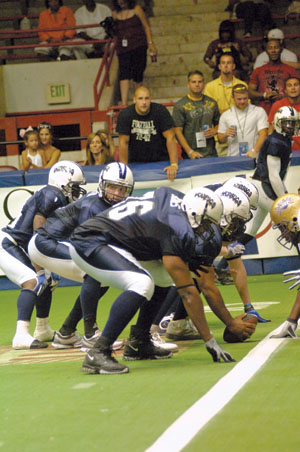 It’s Friday evening in Blackham Coliseum. A group of men in their early to mid 20s mills about; a few are stretching, one is warming up with short sprints. These are clearly athletes, chiseled arms jutting from shirtless sleeves, confident in their physicality. Brilliant sunlight filters in through slits along the side of this has-been sports arena. A rickety fan whirs and rattles somewhere out of sight. Padded barricades define a space in the middle — 50 yards long, 25 yards wide — covered with ancient Astroturf, the unforgiving-to-the-body light green stuff that disappeared from most sports arenas more than a decade ago. The hash marks, yardage lines and numbers are faded. The exposed seams between sections of turf suggest it has been hastily laid out. This is a football field and these are professional football players. The Acadiana Mudbugs. Lots of guts, little glory.

In the middle of the field, kicker LJ Daughtry, sporting an LHS Mighty Lions Football T-shirt, warms up his leg, trying 30-yarders that sail toward an elevated net edged with vertical white stripes marking a 10-foot wide goal levitating over the north end zone. He hits some, he misses others. One kick flies high and thuds off an overhead light hanging from the rafters, sending a pair of pigeons scattering.

This is do-it-yourself football in a do-it-yourself football league, the Southern Indoor Football League. Entrepreneurial owners throw together a team of young men with gridiron fantasies that just won’t go away. “It’s every big man’s dream to try to play somewhere else, try to make it to the next level,” admits cornerback Brandon Davis about his motivation for playing. The 5’10” 180-pounder played prep football at Comeaux High, but has no collegiate experience. “You get seen at this level, maybe you can get at the next level and eventually make it to where you need to be.

This is the inaugural season of the SIFL. It started off as six teams scattered across the Gulf Coast area from Austin to Pensacola; five teams now: Pensacola was punted from the league after repeatedly cancelling games because it couldn’t pony up for the travel costs for away games, which comes to about $5,000. Host teams pay for the visitor’s hotel rooms; travel teams use charter buses. The 12-game season kicked off April 18 and concludes with a championship game hosted by the team with the best record on July 25. Attendance at Mudbugs home games has been spotty this first year, reaching a plateau of about 1,500 for last week’s tilt against the Lake Charles Swashbucklers. For die-hard football fans, an arena season gets you from NFL withdrawal to NFL mini-camp, sort of a methadone for gridiron junkies, a little something to tide you over until your next fix.

“It’s a little unusual compared to playing 11 on 11,” says linebacker/running back Renaldo Delcambre, a former UL Ragin Cajun footballer, “but the concept is the same.”

Delcambre, like most of his teammates, played football at the collegiate level. Seven players on the Mudbugs’ roster are listed as former Cajuns. There’s a guy from McNeese, one from the Citadel, another from Duke. A game check is modest: it’ll cover groceries and utilities that week. All of the players have day jobs; Davis works offshore, Delcambre is a home-health worker. Outside in the parking area between the coliseum and 4-H livestock pens, it’s pick-up trucks instead of Escalades.

And arena ball is different from the NFL in other ways: It’s eight on eight and favors the passing game. Teams are allowed to maintain only 20 players on the active roster, meaning virtually everyone also plays special teams, and some play both offense and defense.

“Arena [football] is an offensive game,” says Davis. “We could stop them every now and then, but it’s an offensive game, and that’s what fans like to see: they like to see scoring.” And scoring they see; 56-35 is not an unusual score — so usual, in fact, that it was the final score for two consecutive games between the Mudbugs and the Swashbucklers, who won both.

Head Coach John Fourcade comprises exactly one third of the Mudbugs’ coaching staff. Now that he has arrived, players are tossing balls around and stretching with more purpose. Fourcade’s is a familiar name to many football fans in Louisiana. A replacement quarterback — a scab, as replacements were called by the union players on the picket line — for the New Orleans Saints during the NFL strike season of 1987, Fourcade made it onto the regular Saints roster and into Saints fans’ hearts and stayed with the team through the 1990 season. He still does color commentary for Saints games on New Orleans radio. This is his off-season job. When he arrives for practice today, he first grabs a broom, does a little tidying up, then gets a player to help him straighten up a section of Astroturf in the end zone. The field had to be rolled up last weekend to accommodate a dog show. Once practice is under way — a no-pads walk-through to avoid injury — Fourcade betrays the perfectionist. “Let’s do it again,” he barks, repeatedly, as the offense masters the timing, routes and blocking assignments on a pass play.

Lexie Iskander, the team’s sports writer/publicist/errand runner/go-to gal, hovers at the margins, on and off the phone with club owner Bentley Turner. A senior communications major at UL and sports writer for The Vermilion who also works in the sports department at KLFY TV10, Iskander  is technically an intern, meaning she works without pay. But she works about 40 hours. “It just shows how much I love this team,” she says with a laugh. Iskander is cutting out to Walmart to pick up Super Glue because the person who applied the Velcro to the sponsor signs that will line the wall around the field tomorrow night put it on backwards. The signs don’t stick.

But Fourcade’s coaching apparently does. Saturday night in Blackham the Mudbugs will host the Houma Conquerers. It will be a close game for four quarters. But thanks to a last-second interception, the ’bugs will hold on for a thrilling 35-33 win, snapping a three-game losing streak and improving their record to 4-3.

The Acadiana Mudbugs have two remaining home games in Blackham Coliseum: Saturday, June 20, against the North Texas Crunch and Monday, June 29, versus the Austin Turfcats. Tickets are $10 in advance, available at WOW Cafe Wingery and Baja Sports Grill on Bertrand Drive, and at Red Lerille’s. Admission is $18 at the gate. Find out more by logging on to www.mudbugsfootball.com .