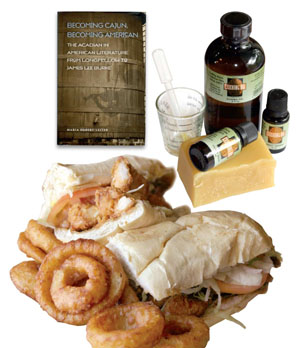 BEYOND THIBODEAUX & BOUDREAUX
The story of the Cajuns is complex and rich, and their treatment in American lit mirrors their long journey over 250 years from an isolated — culturally, linguistically and geographically — subculture to a unique yet mainstream population of Americans. Maria Hebert-Leiter, a Thibodaux native now living in Pennsylvania, tracks their story through the stories of others, following them through their parallel historical and literary phases of development: from Acadien to ‘Cadien to Cajun. Becoming Cajun, Becoming American: The Acadian in American Literature from Longfellow to James Lee Burke (LSU Press) charts the history of the people from the tragic love of Evangeline and Gabriel in Longfellow’s classic through the works of Kate Chopin to modern storytellers like Ken Wells and Burke. While readable and accessible to a popular audience, this is a scholarly work first, accompanied by detailed notes, an index, and a bibliography that cites roughly 200 sources. Becoming Cajun, Becoming American retails for $32.50 and is available at all major book sellers. — Walter Pierce

SAGE & CITRUS
The smell of clary sage is unmistakable. It’s earthy, soothing aroma compares to no other. When blended with sweet orange oil the resulting fragrance is indefinable. Such is the type of experience you can create for yourself at Earth-n-Herbs in Grand Coteau. Organic essential oils are mixed in base oils such as jojoba or blocks of beeswax for the blending of creams. The end product is stimulating and natural in contrast to the scent pollution of the masses. Building fragrances denotes that two or three aromas will do, any more would be superfluous. The serene complexity of these oils provides much more than a brand or a name. Clary sage retails for $42.10, sweet orange oil for $9.75. Aromatherapy workshops to learn the basics of using essential oils are held at the store for $20. Call 662-4022 or visit earth-n-herbs.com for more information. — Angelle-Leigh Breaux

LOVE THAT LAPIN
The other other white meat keeps hopping up on menus in Acadiana. Nah, it’s not pork; cochon is so yesterday. I’ve been nibbling smothered rabbit, grilled rabbit, rabbit sauce piquant, and now a fried rabbit poboy at Ziggie’s Grill. Owned by John LeBlanc and father-in-law Gabe Bako of La Fonda’s, the restaurant has been frying up rabbit tenders as an appetizer, and tried over-stuffing a poboy. It was an instant hit. Substitute eggplant fries, split the monster poboy with a friend, and that will leave a smidgon of room for cook Joe Alexander’s beautiful bread pudding. Ziggie’s is located in a strip mall just past the entrance to Le Triomphe golf course on Highway 90 outside Broussard. Call 856-0007 for more information. — Mary Tutwiler