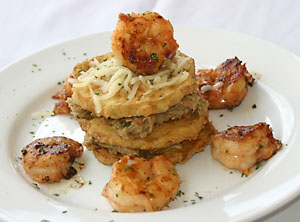 The newest addition to the downtown restaurant scene has opened its doors. The Jefferson Orleans, on the corner of Jefferson and Johnston, is serving some classics from the Louisiana seafood canon. Chef and owner Aaron Ward is spooning up shrimp and grits, crawfish cornbread smothered in crawfish etouffee, seafood dressing-stuffed fried eggplant with grilled shrimp, summertime smothered okra and shrimp, and grilled redfish. On the turf side of the menu are burgers, a Philly cheese steak, and grilled filets and ribeye steaks.

A Morgan City native, Ward and his partner Penny Henry love the galleried two-story building that provides a gateway to downtown. “It looks like it belongs on Canal or Bourbon Street,” says Ward. Hence the Orleans moniker. And inside, there’s jazz on the sound system to prove it. The only thing missing is cocktails. Ward says they’re waiting for a liquor license to be finalized, in 30 to 60 days. “This is Louisiana,” he says, “you gotta have drinks.”

The Jefferson Orleans is open for lunch and dinner Monday through Satuday, call 234-9101 for more info.