The substance of these investigations has centered on victims who were defrauded in an alleged pyramid scheme involving so-called CDs, with losses totaling in the billions of dollars, according to the AG’s press release. Houston-based Stanford Financial opened Stanford Group Company in Baton Rouge in the 1990s along with another Stanford entity, Stanford Trust Company, and expanded to Lafayette in 2005. It celebrated the opening of its new Stanford Group Company office in River Ranch in early 2008. (In photo below, the Rev. F. Hampton Davis III says a special blessing for the new Lafayette office of Stanford, a company that promoted its faith and religion as fervently as its bogus CDs ; the woman to right 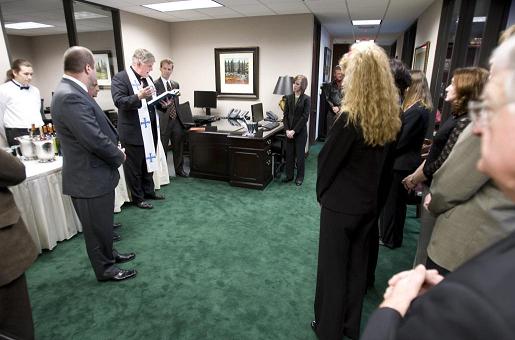 with the kinky blond hair is Tiffany Angelle, who was vice president of the Lafayette office).

The AG says he has opened a criminal investigation to determine what violations of state law may have occurred and to fully protect the rights and interests of Louisiana victims.

David Caldwell, head of the public corruption and special prosecutions unit, says there are potentially hundreds of victims of Stanford’s financial schemes. “We know of hundreds of people who’ve lost their life savings due to the actions of the Stanford group. We know there are potentially hundreds more. In order to fully investigate this case and ultimately hold those responsible for what occurred, we need to develop a complete and accurate list of potential victims and their experiences with the Stanford Group,” David Caldwell says.

The AG’s office has set up an area on its Web site for investors who have lost money. If you believe you’ve been defrauded by Stanford, you can print out the form and send in the relevant documentation to the Louisiana Attorney General’s Office, P.O. Box 94005, Baton Rouge, La., 70804. Visit the Web site here or call 225-326-6200.