The Independent's guide to this week's krewes, parades and throws of Lafayette Mardi Gras 2005 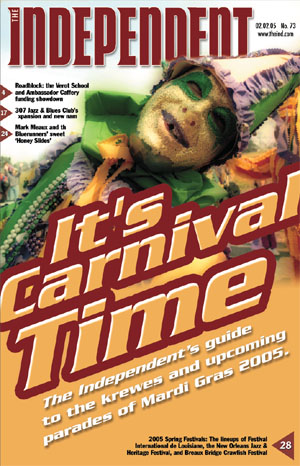 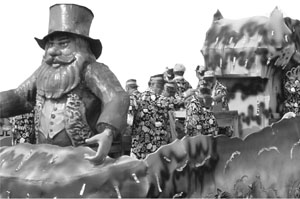 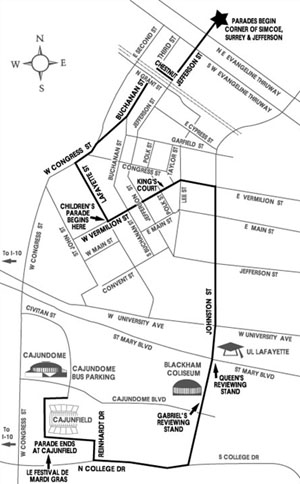 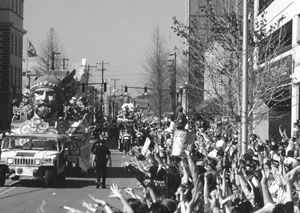 Mardi Gras is a sensory-overload reminder of Acadiana's unique charm. While Louisiana's indigenous culture thrives year-round in our food, music, art and joie de vivre, Mardi Gras brings all those elements together in a glorious celebration rooted in decades of tradition. From the pageantry of masking and parades to the non-stop accompanying crawfish boils and local dances, Carnival time embodies both Acadiana's irrepressible spirit and respect for customs handed down for generations.

The Mardi Gras krewes of Acadiana play an invaluable role in ensuring that cultural continuity. The first Lafayette Mardi Gras krewe, Oberon, was founded in 1928, and now Lafayette is home to more than 15 additional krewes that work year-round to keep the spirit of Carnival burning brightly. One special aspect of Lafayette Mardi Gras is its multiple children's krewes; the annual children's parade and its family atmosphere is a sharp contrast to the bacchanalia often associated with New Orleans' superkrewe parades like Endymion and, well, Bacchus.

Behind the scenes, the members of our Lafayette krewes plan their costumes and annual themes, and contribute to the local economy with their throw purchases, float rentals and annual pageants and balls. Behind their masks, they're the unsung heroes of Mardi Gras, donating their time, effort, and dollars ' all to ensure that the community passes a good time during the Mardi Gras season.

And that's what The Independent's 2005 Mardi Gras guide is all about, too. We talked to every krewe about its plans for this week's parades, and have the lowdown on kings and queens, themes, krewe history, and who's throwing what this year. So if you want to plan your parade-watching by finding out which krewe is throwing Louisiana-themed stuffed animals (crawfish, shrimp, etc.) and which krewe boasts Elvis Presley impersonators, then read on.

The krewes are arranged alphabetically in the day of their parade. For additional Lafayette Mardi Gras events, as well as country Mardi Gras celebrations and runs in the surrounding Lafayette area, see the Mardi Gras boxes in our calendar section.

The Krewe of Apollo decks out in rainbow colored costumes with feather headpieces in Lafayette's kick-off parade. The Apollo Queen amplifies the krewe's theme of the Las Vegas Strip with a showgirl outfit. Vegas-frequenting celebrities Michael Jackson, Elvis Presley, Ray Charles, Dolly Parton and Aretha Franklin join the burlesque procession down Johnston Street. "I think it's going to be fun. I think we're going to have an excited group," says Apollo captain Ted Viator. "We might have to even have to stop the float every now and then and let Michael Jackson do a little number. He's throwing Moon Pies to go with his moon walk."

The Krewe D'Argent started off as a krewe for folks who worked in the financial business, and membership requirements weren't very stringent. There were only two prerequisites for possible krewe members: "They had to have enough money to join and they had to be breathing," says President Fred Werner. Now the 8-year-old krewe has some 50 members, and not all of its members are in the business of finance. Look for about 20 members on its float.

The Krewe of Olympus is a growing krewe. It was established in 1988 with 34 members and couples and Gerald Chaisson as the first king. During the reign of the seventh king, the krewe had expanded to 72 members and moved its ball from the Lyons Club to the Hilton Lafayette. The krewe is now in its 17th year and has 80 members. This year's ball on Jan. 2 incorporated the theme "South of the Border," and its Fiesta del Baile included piñatas, Mexican flags, lights and a festive parade. Nobility names also took on the theme, from Senorita of Salsa Lisa Angelle Broussard to The Fantastic Fandango Senorita Kristy Jenae Hebert. "It's a lot of fun," says Donald Fontenot, King XV and this year's captain. "We have a good time."

The Krewe of Renaissance was started in 1995 as a couple's krewe. Five seasoned local Mardi Gras revelers got the krewe going, with plans to involve the entire family. Teenagers are presented at the annual ball, and younger children serve as attendants. A coincidence this year, the king and queen are a couple in addition to the duke and duchess, but singles are also allowed in the krewe. The Jan. 7 ball illustrated the "Magic of True Love" theme with music and dance. "Our ball is more like a short musical, with song and dance numbers," says krewe member Mary Beth Carrier.

It's gonna be a circus at the Triton parade this year. Utilizing the theme "Triton Under the Big Top," krewe members will be throwing stuffed circus animals and masking as carnival icons such as snake charmers and clowns. Mardi Gras collectors should note the number of Triton crest insignia throws the krewe's doling out this year, including medallion beads. The theme continues at Triton's ball at the Cajundome Saturday night, which is open to the public and will feature old-time cotton candy and popcorn machines on hand as well as lion tamers. The ball is open to the public. Tickets are $60 and must be bought in advance. For more info, call Dwight Sledge at 235-5433, Ext. 3004.

The 15-year-old king and queen of this year's children's parade chose the parade's theme, A Few of our Favorite Things, from a classic movie of their parents' generation ' The Sound of Music. The krewe will lead Saturday's children's parade dressed as their favorite things, including cowgirls and New Orleans Saints football players. Many of the children's krewe, ranging in age from 3 to 16 years old, will march as the fanciful characters from modern franchises Harry Potter and The Lord of the Rings. Part of the krewe also rolls in five convertibles, including a couple of classic models.

The Krewe of Bonaparte is one of Lafayette's largest krewes and promises to make its presence felt this year with its parade. "It's the only show in town that night," says member Stuart Clark. "We've got an average of 20 riders per float. People are going to get a lot of beads." In the midst of scores of beads and cups, one lucky Mardi Gras reveler will catch the krewe's special medallion necklace depicting its coronation ball royalty.

The members of the Camelot children's krewe range from 2-year-olds to eighth graders. Its original inspiration from Camelot carries over to its royalty; 14-year-old Paul David Greene reigns as King Arthur this year, and the title of Queen Guinevere is bestowed on 13-year-old Kathryn Lydia Hays. The honor court of 12 knights and ladies will be led by Brodie Richard (Sir Lancelot) and Kaitlyn Simmons (Lady Elaine). Five convertible cars will help carry Camelot royalty. In addition to traditional throws, be on the lookout for stuffed animals from Louisiana ' including crabs, shrimp, crawfish and alligators.

Treasurer and board member Dan LaTour of the Krewe of Celts says the krewe has 42 members from around the state and has been in existence for eight years. King Timothy Power and Queen Jacquelyn Power will be throwing pirate-related items, but LaTour says, "We're not quite sure what those are." Look for one 40-foot float with 24 people on board. Membership to the krewe is open to everyone; for more information, e-mail [email protected]

Every child is royalty in Krewe des Jeunes Amis. "When we started our krewe we wanted to get away from one king and one queen," says President Darcy Jacobsen. "We have several kings and queens. This year we have eight kings and eight queens. It kind of gives everybody the chance to be the big cheese." Membership in the krewe rotates frequently, as kids can't remain members past the eighth grade. In addition to beads and doubloons, look for little rubber ducks thrown from one of the krewe's floats or five cars.

The Krewe of Oberon is the oldest Lafayette Mardi Gras krewe and is a krewe for children and their parents. "It was formed by the Catholic daughters in St. John Cathedral Parish," says 15-year-old Courtney Blanchard, who reigns as Queen Titania this year. Blanchard and her parents have been in the krewe for 11 years. The official name is the Krewe of Oberon Children's Carnival, and it was established as a wholesome activity for children on Mardi Gras day. The king's and queen's names come from Shakespeare's A Midsummer Night's Dream. Oberon's annual ball includes a backdrop made in New Orleans, a tableau, presentation and dance. Its signature color this year is purple.

The generational ties of Mardi Gras will be on display at this year's Versailles parade. Thirteen-year-old King Ryan Turner's father reigned as king in 1981, and it's the first time a father and son have served as king in the krewe. Fourteen-year-old Queen Laura Yvonne Domingue's brother Andrew also previously wore the King's crown. Versailles royalty will be riding in convertibles this year and throwing a number of items emblazoned with the Southwest Louisiana Mardi Gras Association's insignia.

Look for Troubadours krewe members riding on its adult floats this year; unfortunately Troubadours isn't having a children's-only float this year, according to krewe member Judy Picard. But that doesn't mean that parents and kids won't be throwing the traditional bounty of throws and continuing its theme of Richard Fetes Ivanhoe, which it celebrated at its ball on Saturday, Jan. 29.

The oldest women's krewe in Lafayette takes its name from an indigenous Native American tribe that translates as "eaters of men." The mystic krewe's members also maintain a high level of secrecy. "Our krewe members are masked during the ball," says one anonymous member. "We wear Indian costumes, and you sew a row of sequins on for every year you're in the krewe." The krewe's floats, which pay homage to Native American craft designs, will include maids championing local harvests of oysters, corn, rice and berries.

The magic of the Far East comes to Lafayette with Victoria's Oriental Treasures theme. From its three floats, krewe members will be throwing special Oriental dragon beads and cups with Oriental designs.

The Xanadu krewe is known for its pink wigs and pink beads, and adds to its color theme with a number of tiffany blue items this year. Look for special beads in iridescent blue as prize throws from members riding in five floats, including two royalty floats and an entertainment float. And with its theme of "Bling, Bling, it's a Girl's Thing," the krewe is overflowing with a booty of special krewe medallions, doubloons and cups it's ready to dispense to parade-goers.

"The [Gabriel] krewe is basically a support organization for the Southwest Mardi Gras Association," says Judge Kaliste Saloom III, who's been a krewe member almost since its inception. The Krewe of Gabriel was formed to help the association stay active and raise money to help for its parade and ball. Original members were asked to donate $50 to help the association put on Mardi Gras that first year in 1948. It is the oldest krewe next to the children's Krewe of Oberon.

Lafayette's oldest African-American Mardi Gras krewe stages its annual Parade of King Toussaint L'Ouverture and Queen Suzanne Simonne with a celebration of cultural diversity this year. The 2005 theme honors Native Americans, and krewe royalty and members will be riding in nine car/convertible floats as well as its 12 large floats.

And don't forget to wind it all up with the Independent parade, sponsored by KADN Fox 15, rolling immediately following the Lafayette Mardi Gras Association parade. See you on the parade route. Happy Mardi Gras!