One thing is certain, despite a creeping recession, Lafayette can always count on being well fed 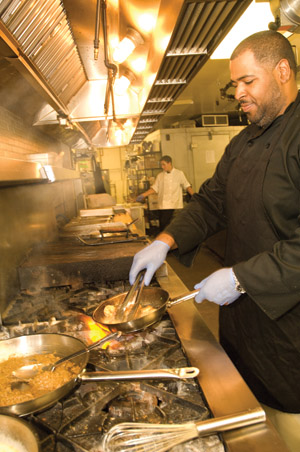 Aaron Ward sounds surprised that folks who eat his food clean their plates. “People like my smothered okra. I didn’t expect it, but every time I smother okra with shrimp, they eat it all.” Ward put the skills he honed in Morgan City, catering for the likes of the chamber of commerce there, on the line. Despite the soft economy, he just opened an 80-seat establishment downtown called Jefferson Orleans. And he’s not the only contrarian chef in town.

There are approximately 850 restaurants in and around Lafayette. In Louisiana, restaurant sales per person average more than $1,000 each year, and Lafayette, with a population of 206,976, eats out regularly. That means Lafayette restaurateurs can expect to take in nearly $207 million this year. Even in these belt tightening times, optimistic cooks are firing up their skillets and opening the doors of new restaurants all over Acadiana.

“Everybody says it’s slow,” Ward says, “they told me, ‘Its not a good time to open.’ But I liked the building, and the owners were willing to negotiate on the lease, because it’s been slow.” Ward says a soft opening is a good chance to iron out the kinks and get his staff ready for bigger crowds, once the word gets out. He’s bringing some new flavors to downtown, which is known as a mecca for international tastes. Southern classics like shrimp and grits, crawfish cornbread and seafood stuffing layered between fried eggplant rounds have been lacking on Jefferson Street, where it’s been easier to find mussels in saffron broth or sea urchin sushi than it has been to order a shrimp-topped steak, especially in the evening.

Downsizing to a smaller restaurant is another option. John D. Slaughter closed the upscale Catahoula’s Steakhouse on Pinhook in December. On the first of May, he opened La. Fish Fry in Carencro. “I went from selling $40 steaks to $4 fried fish and chicken,” says Slaughter. Business, which had slowed to a simmer at his pricey restaurant, is steady in the country town. “Our price point is from $4 to $10. We have a much larger market, and in this soft economy it’s helpful if you can feed a family of four for under $20,” he says. Slaughter’s recipe is to keep it quick and simple: fried catfish, shrimp and chicken tenders, a drive-thru window, and an inexpensive  galvanized aluminum look.

James Lawrence Jr. went to work in River Ranch as a consultant with Village Café, but has moved across the River Ranch square to become the food and beverage director for the new City Club Bar and Grill. The beautiful restaurant with the best outdoor dining area in town housed Italian influenced Bella Figura until the first of June. The City Club Bar and Grill returns the space to its original concept of a members-only restaurant. Executive chef Pat Mould is working on a farm-to-table concept, featuring the best of locally raised meat and produce. Items on the menu will include a herb roasted chicken from Gotreaux Farms, (the organic family-farm in Scott), chargrilled redfish on the half-shell, and lots of farmers market fresh vegetables. Lawrence says the opening date has not been set; “soon,” he says, “soon.”

Meanwhile Bella Figura has relocated across Kaliste Saloom from River Ranch in the The Shops at Martial. This is the sixth incarnation for restaurateur Jack Ainsworth. He started Pizza Inn in Lafayette in 1966 and was a founding partner in the Catfish Shak before he opened Louisiana Pizza Kitchen in 1993. The trendy pizza place with its brick ovens was a hit. He followed up with Bella Figura on Kaliste Saloom Road in 1999 (a spot now home to Marcello’s), made the move to River Ranch in 2007, and will be opening the new Bella Figura in late June or early July. While the menu and the polished casual atmosphere will remain largely the same, Ainsworth is capitalizing on his experience with brick ovens, installing one to re-create his crispy crust gourmet pizzas a la Louisiana Pizza Kitchen days.

Lafayette loves Lebanese food. Grape leaves and hummus are so ubiquitous around here they pop up on otherwise all-American menus and nobody even comments. Sultan Café & Grill, which opened in April at the intersection of North Bertrand and Eraste Landry, is the latest addition to the Middle-Eastern movement. Owner Mustafa Ozen is actually Turkish. His partner, Ramzi Nassour is Lebanese. The running joke between the two men involves a disagreement about whether the kibbe and kefta, the baba ghanouge and chicken shawarma, the Lebanese tea and Turkish coffee, hail from Beirut or Istanbul.

Out in Broussard, restaurateur Shashi Gupta has opened Masala II. She wet her feet in the food business with two Mexican restaurants, Picante (on I-49 and Ambassador Caffery), before opening Masala, which features Indian tandoori and sumptuous vegetarian dishes. Masala added the popular Spanish tapas small plates two months ago. Now Gupta is venturing into the fast food market with Masala II in Broussard. Located at the intersection of highways 90 and 92, in a strip mall next to a gas station, Masala II will take you around the world in 80 seconds. The international menu offers Indian plate lunches, Lebanese dishes, a Korean-Mexican taco and Cajun-American home cooking.

Entrepreneurs Robert Guercio, Isadore Gravouia, Michael Delcambre and Joe Cole have been working on their new place, Peppa Mello, for nearly a year. The team that brought downtown Lafayette 307 Jazz Club and The Green Room are now ramping up to what they dub as a neighborhood haunt closer to the UL campus. The restaurant — “Peppa, cause we have a spicy way of life, Mello, and a laid back attitude,” says Cole — will have a little bit of everything. Burgers, wraps, salads, cheese sticks, hummus, draft beer, margarita and daiquiri machines, live music, high-def sports, Wi-Fi, Internet jukebox, outdoor dining and the piece de la resistance, Don’s Specialty Meats’ boudin, are all elements of what Cole describes in his non-stop patter as a “social environment.”

Located at 407 Brook St., just a block from UL, Cole expects a lunch buzz not only from the big pedestrian/bike crowd who live in the neighborhood and pass his door on a daily basis, but because the restaurant is approved to accept the UL Cajun Card, the university’s student debit card. Evenings have historically been hard for restaurants in that location. Bonnie Bell’s Bistro moved to downtown from the Brook Street site because of the slow night trade. Cole and company are betting on beer — $3 brewskies, $4 burgers, Ragin Cajun (and Tiger) games on the tube, and a designated walking destination from dorm rooms — to keep Peppa Mello hoppin until the midnight hour. Cole says they plan to open sometime this summer, “definitely before the fall semester starts.”

Other restaurants in the works are Burger Smith, which will open in River Ranch this summer, and Rochetto’s, an Italian and pizza restaurant in Scott owned by Phillip Faul, Pat Bordes and Brady Benton of Fezzo’s. It’s slated to open in September.

One familiar face on the dining scene, Lafayette’s Restaurant, shuttered its doors Friday. Open for a decade, owners Zee and Lisa Azizi, who formerly owned Gator Cove, sold the building last week. Located near the new heart hospital on Kaliste Saloom, the restaurant will be turned into a medical complex.