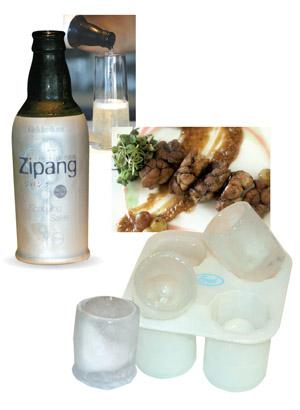 RICE WINE MEETS MANGA
Love anime? That’s the term for Japanese graphic novels brought to cartoon life. I like them lots, but I never thought I’d dig a manga series about a Japanese warship from the future that mysteriously finds itself in the Battle of Midway. The anime, all 26 episodes, is dubbed “Zipang.” Actually, watching episodes online takes me back to the nightmare of 11th grade term papers when you knew some World War II geek would detail the battles of Midway and Guadalcanal. Had I only had a bottle of Zipang, all those evaluate-your-across-the-aisle-classmate’s-term paper would have fizzed into high school happy memories. Zipang is a cartoon. Zipang is also a bottle of crisp, cold sparkling sake. Great this summer with sushi. Get your geeky friends in the fizzy crosshairs. Gekkeikan Zipang, $12, at Bonsai downtown, 232-8333.
— Mary Tutwiler

...AND SHOOT IT IN AN ICE CUBE
Knock back that inebriating Nipponese nectar in a disappearing shot glass. It’s actually a shot glass made entirely of ice. The Cool Shooters Ice Shot Glass Maker is a silicone rubber mold. Simply fill with water or your favorite juice, pop in the freezer for a few hours, and voila — out comes four fully formed, standard-size shot glasses. The walls are thick on these icy vessels, so multiple rounds are possible and — in the summer heat of SOLA — de rigeur. This is the perfect accouterment for bar owners, too: Patrons can’t “accidentally” walk off with your merchandise. It melts away to nothing! A hint for best usage: Don’t fill the reservoirs to the top; the water expands when it freezes and your shot glasses will lean like the Tower of Pisa. The Cool Shooters Ice Shot Glass Maker is available all over the Web and retails for about seven bucks. Search “ice shot glass” on Google and there it is. — Walter Pierce

EATLAFAYETTE ALL SUMMER LONG
Through Aug. 15 you can take advantage of specials at a variety of Lafayette Parish restaurants thanks to the fifth annual EatLafayette campaign, which is specifically designed to drive diners to locally owned establishments. There’s the three-course special at Charley G’s for $29.95; a free queso or black bean dip appetizer at Boulevard Grille on Wednesday, Thursday and Friday evenings with purchase of two entrées (dine in only); a salad, choice of entrée and dessert for two at Ema’s Restaurant for $20; pulled pork sandwich, chips and a canned drink for $6.75 at Johnson’s Boucaniere and lots of other great choices. For a list of participating restaurants and their specials, visit www.eatlafayette.com . — Leslie Turk