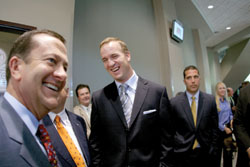 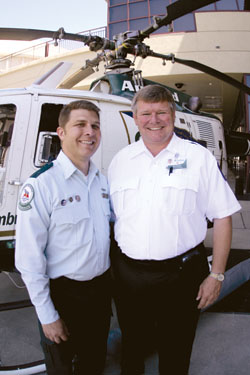 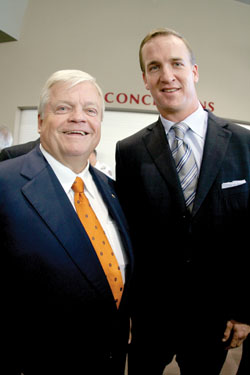 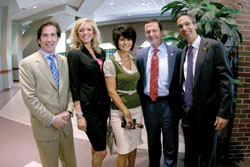 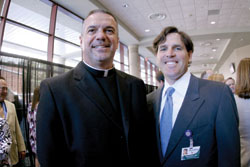 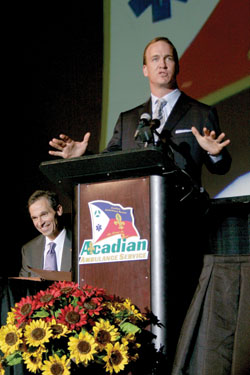 It was a thrilling event for the more than 1,400 who gathered for Acadian Ambulance’s annual Paramedic Luncheon, which this year honored a very deserving Chuck Benedict, a critical care paramedic stationed in LaPlace. as Medic of the Year. But there was another major highlight of the day: Indianapolis Colts’ quarterback and three-time NFL Most Valuable Player Peyton Manning was guest speaker. Manning delivered a motivating speech on the qualities of leadership. “Learn your lessons and quickly move on,” Manning said. “Don’t spend too much time celebrating or licking your wounds.”

And wait, there was more. A real Saint appeared! Dad Archie made a guest appearance by introducing his son via video. Nice touch, indeed.

Acadian Ambulance board member, pharmacist, bank president and state Rep. Fred Mills (now if that’s not a résumé) was emcee. When acknowledging the head table, Mills said Manning would be formally introduced later but emphasized how much he enjoyed meeting someone whose performance inspired him so much every Sunday. So when Father Louis Richard stepped to the microphone to give the invocation, he quipped, “Freddie, if you’d just come to my church on Sundays, I could inspire you too.” We haven’t checked with Father Louie to see if Mills has shown up for Sunday Mass.

But back to the real reason for the gathering: Benedict himself.

After Manning’s inspiring speech, Acadian’s executive vice president and chief medical director, Dr. Ross Judice, delivered a moving introduction of the heroic medic. Judice described Benedict, an eight-year Acadian veteran, as one who sees people on their worst days and feels that it is his opportunity to make their day better. Benedict was presented with a plaque, Medic of the Year pin and a check for $1,000.

In a surprise presentation, state Sen. Mike Michot presented Acadian exec Richard Zuschlag with a resolution passed by the House and the Senate commending him on being the CEO of the company that was recently named Large Business of the Year for 2009.

To watch the video, visit Acadian’s Web site at www.acadian.com and click on “What’s New.”