Brigadier Gen. Hunt Downer and Natural Resources Secretary Scott Angelle are both being encouraged to launch separate bids next year for the 3rd Congressional District, which encompasses portions of Acadiana. In interviews this week, neither would reject the idea of a possible run.

Of course, the political posturing is based on current U.S. Rep. Charlie Melancon, D-Napoleonville, vacating his seat to oppose junior Sen. David Vitter, R-Metairie, on the same ballot. Melancon hasn’t made it official yet but suggested in a prepared statement last week that gears are already turning. The congressman publicly flirted with the race in 2008 before announcing earlier this year that he was leaning against the move. “I am discussing this opportunity with my wife and kids and will be making an announcement in the coming weeks,” he said.

That would leave the 3rd Congressional District, which is anchored by Terrebonne and Lafourche parishes, wide open. Downer, a Houma Republican and former speaker of the state House, said by phone Tuesday that he found the situation “intriguing” and has been encouraged by people and businesses in the district to get back in the saddle. In 2003, Downer ran unsuccessfully against former Gov. Kathleen Blanco, a Democrat, and he went on to serve in her administration in various capacities, including as legislative liaison. “I’m flattered, and it’s something that I may be considering later,” Downer says. “It’s still a year away.” 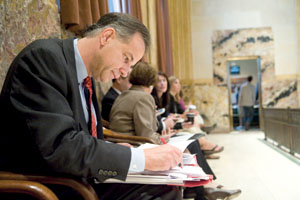 Angelle, a Breaux Bridge Democrat, is the legislative liaison for Gov. Bobby Jindal, a Republican, but is better known as the present secretary of the state Department of Natural Resources and the former parish president of St. Martin Parish. Two years ago, his name was momentarily floated as a candidate for lieutenant governor, but he’s stayed on the bureaucratic side of the political fence since going to work for Blanco as DNR chief. In a brief interview from the House floor Monday, Angelle said he couldn’t comment on anything else but the ongoing regular session, which ends Thursday and is thumping along at a fevered pitch. “I’m not going to consider anything right now,” Angelle says. “I can’t take my eye off the ball for one second up here.”

Earlier this year, businesses in the Gonzales area tried to recruit Ascension Parish Sheriff Jeff Wiley, a Democrat, to run against Melancon in the 3rd Congressional District, but at the time Wiley said it wasn’t in the cards. Among the only sure thing is Rep. Nickie Monica, R-LaPlace, who was being courted prior to the regular session by the National Republican Congressional Committee. In an interview last month, Monica said he was gearing up and getting ready to run.

Uncertainty about the 3rd Congressional District has been looming for months, especially as the 2010 U.S. Census draws near. The district is expected to change somehow — no one knows yet — due to population changes. One proposal from the Louisiana Family Forum would merge the district with New Orleans to create a minority district, while other Democratic proposals have the district moving further west into Acadiana. The state Legislature will be charged with redrawing the lines in 2011.