It’s gonna be the meanest flood anybody’s ever seen. In other words, a century from now, folks in Lafayette and Baton Rouge may be coastal residents and New Orleans will go the way of Atlantis. That’s the predictions from two LSU profs, who say that no matter how much coastal restoration we do, we’re doomed to lose between 4,000-5,000 square miles.

Former LSU geologist Michael Blum, who currently works for ExxonMobil Upstream Research Co. in Houston, and LSU geology professor Harry Roberts have published a paper titled “Drowning of the Mississippi Delta due to insufficient sediment supply and global sea-level rise” in the “Letters” section of Nature Geoscience magazine, which comes out today.

The cause for failure is the theory that since the Mississippi River only carries half the sediment load it carried in the 19th century, the river cannot build land the way it once did. Dams and locks upstream are the culprits that prevent silt from entering the Big Muddy and eventually reaching our coastline. Levees and dredging account for more sediment loss and subsequent subsidence. Then factor in sea level rise and you’ve got the doomsday scenario.

Most shocking is Blum's and Roberts’ map. You can kiss Des Allemands, Grand Isle, Houma and Morgan City goodbye, as well as New Orleans. 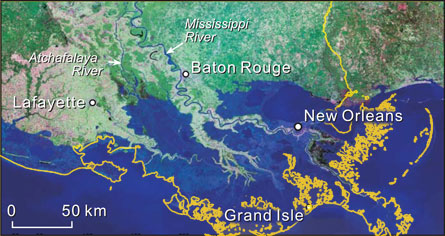 State coastal czar Garret Graves told The Times-Picayune that the report was overly pessimistic, and that much of the coastal work now being planned by the Army Corps of Engineers and the state will be able to save up to 80 percent of the report’s projected land loss. “Is it possible for us to sustain a significant part of the coastal area in light of projected sea level rise and the erosion we’re experiencing today? Yes.”