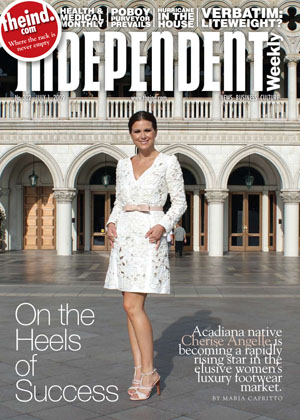 Champagne glasses clink as the bubbly flows. Tiny chocolate cupcakes are strategically placed, just waiting to be devoured. Oh, but the shoes, the shoes are the real temptation, the real Achilles heel on a sunny Friday afternoon. Sitting atop the elegant glass display cases at kiki in River Ranch, there they are. Every woman’s vice and delight, just begging to be taken home. But it only takes one look to see that these shoes are different. They don’t scream like a pair of red patent leather stilettos, nor do they fade in the crowd like a basic black pump. They find some way of balancing the ordinary and extraordinary, the wild and the tame, simple sophistication and delightful whimsy. Versatile and richly pigmented neutrals, copper chevron heels, interchangeable ribbons, and interesting materials like exotic perch are just a few amenities that make this line a breath of fresh air in a sea of unimaginative footwear. It is easy to see why these shoes are on the tip of the fashion world’s tongue, and why Cherise Angelle is quickly making a name for herself in the design industry.

The trunk show and cocktail party at kiki was Lafayette’s first glimpse at these unique and luxurious shoes from the launch collection of Omelle, created by Acadiana native Angelle and her partner Nicole LaFave. Amidst gray embossed shoe boxes filled with brand new sandals, booties and pumps from the Omelle’s Spring/Summer 2009 collection, Angelle worked the room of family, friends, and potential customers that gathered to show their support as well as peruse the innovative footwear poised for stardom.

Seemingly overnight, the shoes have become a sensation in the fashion world, being recently featured in heavy weight fashion magazines such as Vogue, Elle, Lucky, Marie Claire and also industry mags Women’s Wear Daily and Footwear News. Celebrities are taking notice as well. Supermodel Kate Moss, Sharon Stone, Gwyneth Paltrow and Sarah Jessica Parker (who single-handedly made Manolo Blahnik a household name) all have shoes by Omelle. Its Cecilia bootie was even spotted on the set of the über trendy series “Gossip Girl” gracing the feet of the latest media darling, Blake Lively. That kind of success so early on is unusual for design neophytes; it usually takes at least a few seasons to start getting such robust recognition in the industry. Then again, Angelle’s journey to the fast track of shoe design was serendipitous from the start. Despite the fact that the line came bursting out of the gate at full speed, her foray into shoe design happened almost by accident. 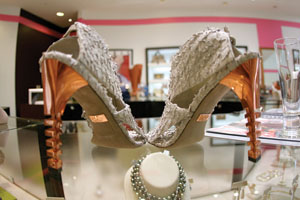 Angelle was born and raised in the Crawfish Capital of the world, Breaux Bridge. She graduated from Lafayette’s St. Thomas More High School in 1998, and went to college in Baton Rouge at Louisiana State University. In 2002, she graduated with a bachelor of science degree in fashion merchandising with a minor in business administration. Like most recent college graduates, she didn’t have a definite plan on what she was going to do with her degree, but she knew it was imperative that fashion be in her future. “Prior to launching Omelle, I envisioned owning a boutique, becoming a buyer for a luxurious clothing store, writing for Vogue, or becoming a stylist,” Angelle recalls. “My love of fashion demanded that I be involved in the industry in some capacity. Footwear design was not part of what I envisioned until years later.”

Her love of all things stylish quickly led her to Scene Again, a product placement agency in Los Angeles where she worked as a marketing coordinator. There, she honed her skills placing luxury products on television and film, dressing celebrities and coordinating fashion shows. She was also able to make many connections in the industry which led to her eventually being featured in a Vogue magazine article in November 2005 called “What Works for Work.”

Angelle left L.A. after a few years and moved back Louisiana. This time she went a little farther down I-10 to New Orleans, where she worked as a marketing and recruiting director for a law firm. It was a great opportunity, but it was a far cry from the dream job that could incorporate her love of fashion. Forced to wear the plain suits of the business world, she had to spice up her dull work wardrobe the only way she could — with expensive and luxurious accessories. Shoes and purses became her only outlet of creativity in her daily work wear, so she became a frequent shopper at Victoria’s on Maple Street where she would buy shoes by Jimmy Choo, Chloe, Marni and Chanel.

All this purchasing led to a friendship between Angelle and Victoria’s owner Paula Landry, which essentially was her stepping stone to becoming a designer. She accompanied Landry on a buying trip to Italy, and that was enough to reinforce her inner desire to become a more intricate part of the fashion industry. Angelle then decided to move back to L.A. and attend the Fashion Institute of Design and Merchandising. 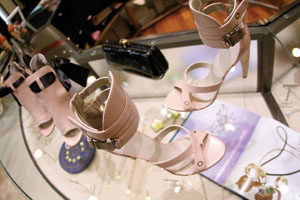 Her timing and decision to move could not have been more perfect; while she was apartment hunting in L.A., Hurricane Katrina hit her home in New Orleans. She may have survived that, but there was another force she was afraid of reckoning with when she returned home to pack for her move. “I thought my father would kill me after he realized how many designer shoes I owned, which he and a couple of his friends moved out of my apartment,” she muses. “Accessories are my weakness, and I was determined to figure out a way to create a business centered around items I am passionate about.”

Enter Nicole LaFave, the other half of the duo that is Omelle. LaFave graduated from Wayne State University in Detroit, Mich., with a bachelor of fine arts in graphic design. She then got an associate of arts degree in knitwear design and construction at FIDM, and was also accepted into the footwear program. Though they had met in a previous class, this is where their friendship blossomed.

Both girls had talent that wasn’t going unnoticed, and they each earned successes in footwear competitions as well as elite internships with shoe companies. Deciding to strike while the iron was hot, they made a command decision while sitting at a Starbucks one fateful afternoon in May 2007. They were going to start their own luxury footwear company. That night they went home and started drafting up a business plan. “Our first list was ‘What costs money,’” Angelle says with a laugh.

Angelle’s father, Randy Angelle, is chairman of the board of First Louisiana National Bank, a prominent Lafayette lawyer, and a Breaux Bridge city judge, so once they had a finished business plan he helped show it around to his many contacts. They were able to find private investors to fund the line, and by October 2007 Angelle + LaFave, the company Omelle is produced under, was officially born. 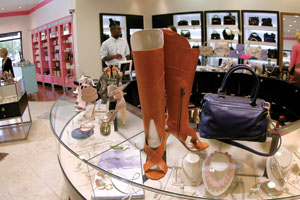 A year later, in fall 2008, their vision was realized: Omelle was hitting the shelves. Produced in the same factory in Italy that manufactures prestigious Prada footwear, the line is made out of the finest materials available, although that is not by a long shot its only source of appeal. They are truly different from the cookie cutter shoes that line the display tables in most department stores, with a numerous amount of fresh details never seen before. Metal insets sitting on stacked leather heels. Velcro-ed shin guards sprouting from strappy sandals. They also have quite the sense of humor. Just in case you forget your right from left, they have a corresponding “R” and “L” embossed in each shoe. Even the packaging keeps it up, with each pair of shoes packaged with a “Bow Bag,” an adorable tote that can be used for whatever you like. There are also quaint “ID Cards” instead of labels on the boxes. “We didn’t want to be like every other brand of shoes out there; we wanted to be ourselves and be creative and think outside the box,” says Angelle. “That’s why people really flock to them, because they are so different and so unique.”

Angelle’s and LaFave’s opposite personalities seem to be the key in the contradictory yet complementary feel Omelle encompasses. While LaFave is artistic, funky, and quirky, Angelle is a sophisticated, classy, self-proclaimed “priss.”  The shoes are a perfect reflection of their two distinctive styles. The Spring/Summer 2009 collection has the duality of being easily wearable, versatile and classic because of its neutral shades and clean lines, but at the same time edgy and innovative because of the unexpected elements and materials.

Omelle was picked up by eight boutiques for this season, and shopbop.com. The company also launched its own Web site and store at www.omelle.com. With the Autumn/Winter 2009 collection hitting stores in August, Omelle has already increased its sales revenue by 20 percent. More stores have picked up the line, including a few overseas in Paris, Hong Kong and Saudi Arabia. Sales are expected to be in the low millions this year. Eventually, Omelle will also begin producing high quality luxury handbags.

Success hasn’t been completely unhindered, due to the fact that it is quite difficult to start a luxury product line in the middle of a recession. With price tags ranging from $495 to $1,095, it can easily fall out of the grasp of many consumers. That hasn’t left Angelle discouraged though, as she remains confident in herself and her product. “I am a determined individual who has never taken no for an answer,” she says. “I was raised with the belief that I was capable of accomplishing any task I put my mind to and all goals are obtainable; it just takes many hours of hard work, dedication and perseverance.”

Angelle is setting even more remarkable goals for herself. Eventually, she and LaFave would like to open branded Omelle stores in major cities across the world in addition to boutique sales. In Louisiana, the shoes are available in Baton Rouge and New Orleans (at Victoria’s, of course), but hopefully they can make their way into a Lafayette store. For now, there is talk of doing a trunk show with kiki every season; this past event was extremely successful, selling more than half the stock she brought from L.A.

With all of this excitement going on, Angelle is somehow finding time to plan a wedding. This summer she will marry her longtime beau Aaron Hurlburt. She also comes home about six times a year to spend time with family in between jet-setting to Italy, New York and Paris for work. Lafayette, it seems, made an impression on LaFave, who wrote in her Omelle blog: “There are such things called drive-thru daiquiris in Louisiana. I swear to this day it was one of the most cooky experiences I have had, and at the same time completely awesome.”

As much success as Angelle has wielded in the past few months with the launch of Omelle, she still remains nostalgic about her Acadiana roots. “The Omelle line contains subtle hints of how Louisiana, particularly Cajun Country, influences and inspires me,” she says, calling an alligator skin her dad received from a client years ago “the catalyst for my love affair of exotics.” Her first collection did not incorporate alligator but did offer perch and python as a material option in five styles. “Initially, when I was working with perch I could not get past thinking of my brother, Justin, when he was younger fishing out of the Atchafalaya Basin and reeling in perch,” she says.