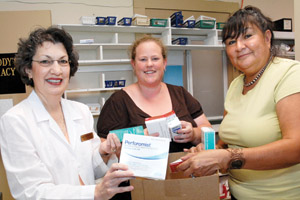 Back in August and September of 2005, Hurricane Katrina and Rita evacuees arrived in Lafayette by the thousands. Many had walked miles through chemicals, gasoline and sludge-filled waters, removing layers of protective skin. Sunburned, battered, broken and shell-shocked, they found their way to the Lafayette Community Health Care Clinic, where they received free medical treatment, dental care, prescriptions and supplies. Most important, these lost souls found compassion. “What we provided was a service of kindness,” recalls Director of Clinical Services Judith Perez. “We did a lot of listening and touching people. There were a lot of tears — people were just so frustrated in not getting what they needed. They had gotten shuffled around and passed around like hors d’oeuvres. We helped a tremendous amount of people. They arrived with tears of frustration in their eyes, and left with tears of joy. It felt really, really, fulfilling and satisfying to be able to help somebody get by, because they got what they needed.”

Following the “Great Storm” Katrina, the United Way of Acadiana funneled all of the resources that came into this area where needed. One of the organizations looking to help South Louisiana’s evacuees was Direct Relief International, a California-based nonprofit agency. After a visit from one of DRI’s key officials, LCHCC applied to the agency for relief. “They provide medications and supplies during emergencies and crises throughout the world,” Perez explains.

Starting with 2005’s devastating storm season, Direct Relief International has furnished LCHCC with free medications, supplies and durable medical equipment to assist victims of hurricanes and other disasters. After Katrina, the clinic received boxes filled with medication and supplies worth an estimated $2.5 million from as far away as France. These provisions were stacked from floor to ceiling in the clinic’s conference room until recently, when a generous donor provided the clinic with a storage unit.

For the past two years, the clinic hasn’t needed the supplies for emergency purposes. “Knock on wood; we have not had to break into them during a hurricane or other disasters,” Perez says. But, that doesn’t mean that the supplies went unused.

Under the agreement with DRI, if the Acadiana area remains disaster-free as of Dec. 1 annually, then it’s party time: LCHCC can break the seal and distribute the supplies where needed. The clinic acts as Acadiana’s clearinghouse for the medicines and supplies in the containers. “So, not only did we utilize the supplies and the medicines they gave us, but we also were a clearinghouse for getting them to other people that would utilize them where we couldn’t,” Perez says.

Prescription medications go directly from the crates onto the LCHCC pharmacy’s shelves. Surgical equipment is sent to University Medical Center, Lafayette’s hospital for the poor and underinsured. Baby formula is donated to Maison de Mère, the shelter for young mothers and their children. Over the past three years, DRI has tweaked its supply list and improved packaging to better meet the medical needs of the community.

This will be the third year that LCHCC has partnered with DRI to bring medical goods into the community. In 2005, the number of prescriptions filled at the clinic rose from 663 in July to 831 in August. As evacuees from Rita trickled in over the next few months, that number increased from 855 in October to 947 in November. By January of 2006, the number of dispensed drugs soared to over 1,300. After hurricanes Gustav and Ike in the summer of 2008, prescribed medications at the pharmacy increased slightly — from 1,242 in September to 1,418 in October — then leveled off for the remainder of the year.

For 2009, LCHCC is prepared to meet any oncoming disasters head-on. On June 2, the clinic received four containers of medicines and supplies, just in time for hurricane season. This year’s treasure trove includes first-dose medications for diabetes, hypertension, asthma, infections and seizures; treatments for hurricane-related casualties such as sunburn, pain, bug bites, cuts and scrapes, and first aid supplies like rubbing alcohol, bandages, gauze and syringes. “In disasters, you are looking at emergency kinds of meds,” Perez explains. “You might have people that have been cut by an old tin roof or exposed to sewerage water, and need to take antibiotics. Or, you might have people who have left their homes, and have forgotten to bring their diabetic or hypertension medications. We can give people emergency supplies from the medicines that we have here, so they are able to last until they can get to the drug store, or the drug store opens.”

In the aftermaths of hurricanes Katrina and Rita, the Cajundome was the site for primary medical care. Because LCHCC does not duplicate services, the clinic filled needs that were not provided at the dome, including dental care and medications. Fortuitously, the Louisiana State University School of Medicine in New Orleans set up shop at LCHCC for about six months until the New Orleans facility reopened, allowing patients to be seen by newly trained doctors. The Louisiana Comprehensive Hemophilia Care Center at Tulane University also moved temporarily to the clinic, where it continues to provide services to date.

LCHCC is funded entirely by donations, grants and fundraising. All services are provided by volunteer doctors, dentists, nurses and pharmacists. LCHCC provides free general medical care on Tuesday and Thursday evenings; a women’s clinic on the first and third Tuesdays of the month; a vision clinic for patients with diabetes and hypertension by appointment; a fillings clinic on Fridays by appointment; a dental hygiene clinic on the fourth Tuesday of the month; dental extractions on Thursday evenings, a fillings clinic by appointment, and nutrition counseling by appointment. Internal medicine residents from UMC volunteer at the clinic three Thursdays per month. “It’s amazing; we get all of these broken people who need something, and then there are all of these people that want to give something,” Perez says. “It’s the coolest thing in the world.”

LCHCC has an immediate need for volunteer physicians and pharmacists. For more information, call (337) 593-9208 or visit www.lafcommunityclinic.org .