The latest star from the Disney machine rocks the Cajundome tonight. 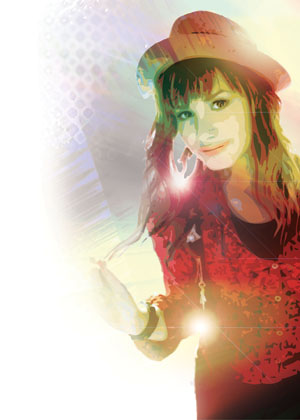 One of the trademarks that is developing with Disney as the company continues to introduce the teen market to a steady stream of new stars, is that its artists take on a workload that could wear out most performers just reading about it.

For Miley Cyrus, there was, of course the “Hannah Montana” television series that got the ball rolling on her career. And as her popularity began to accelerate, so did her presence in the market. Her show debuted in March 2006, and by that fall a soundtrack album was in stores and Cyrus was on tour. As the show continued its successful run, Cyrus released new CDs in summer 2007 and 2008, toured from fall 2007 into winter 2008, released a concert film in 2008 and filmed the recent “Hannah Montana” movie.

Now comes Demi Lovato, who began her Disney-directed rise to stardom last summer with a featured role in “Camp Rock,” the opening slot on last summer’s Jonas Brothers tour and the release of a debut CD, “Don’t Forget,” which included songwriting contributions from the Jonas Brothers on seven songs.

Since then, Lovato has finished the first season of her Disney television series, “Sonny With A Chance,” and filmed two more movies, the second “Camp Rock” and “Princess Protection Service,” while also recording a second CD that is due for release this month, just after she starts her first tour as a headliner. But if Lovato, a Dallas native who will turn 17 in August, is straining under a schedule that has kept her in the public eye almost constantly since last summer, she wasn’t showing it in a recent phone interview.

“To me it’s not about putting out new work and keeping it fresh and keeping it new,” Lovato said when the issue of her workload was brought up. “It’s just me being excited about all of the opportunities I’m being presented with.”

The busy career pace appears ready to pay off with Jonas-like success. Lovato’s summer headlining tour, which plays arenas across the country, is a sure sign of her mushrooming success. Her second CD figures to make a major splash with first-week sales when it’s released.

Unlike many of today’s female pop stars, who favor live shows with plenty of dance routines, costume changes and lavish production, Lovato said her concert has more of a rock show format as she fronts a full band. “To me it’s less of a production thing compared to other artists out there right now,” Lovato said. “I might do a costume change or something like that, but for me it’s all about the music, and that’s what I’m most excited for.”

The new release pretty much takes Lovato out from under the Jonas Brothers’ coattails, although she did work some with Nick Jonas on the CD. On the new CD, Lovato said she wrote two songs with pop/blues superstar John Mayer, a song with William Beckett, lead singer of the modern rock band The Academy Is, and one with Jon McLaughlin, an up-and-coming solo artist signed to Island Records. Such notable help aside, Lovato said she her growth as a songwriter will be apparent on the album.

“Musically I think there’s still a lot of rock music,” she said, describing the new CD. “But I think I grew as an artist by putting in more of my emotions and my passion and my singing, things like that. There’s a lot more soulful music and it’s very heartfelt. I’ve definitely matured, and I hope people will see that, too.”

Demi Lovato performs at 7 p.m. today in the Cajundome. “American Idol” runner-up David Archuleta is the opening act. Tickets are available at the Cajundome box office and through TicketMaster.