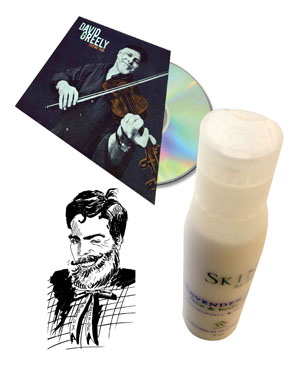 SAVING FACE
When Ann Webb was growing up in Gueydan, she struggled with severe acne. Trying to find a cure for it led her to many different doctors, and eventually to owning her esthetics clinic. There she used her experience and knowledge to create her line of skin care called “Skin by Ann Webb,” a healthier skin care line that uses pharmaceutical grade ingredients and plant extracts instead of harsh chemicals to rejuvenate and replenish the skin. It is paraben-free, cruelty-free (for our furry friends) and 100 percent vegan. The line caters to everything from acne prone, to dry, to aging skin, and they are especially good for sensitive skins because of their natural ingredients and lack of artificial fragrance. One of the standouts of the bunch is the Lavender Silk scrub, a multipurpose product suitable for all skin types. It is in a crystallized powder form, so it can be added to face washes, body washes and even shampoos to exfoliate and nourish. As the aromatic scent of lavender melts away the day’s stress, your skin instantly becomes smoother, softer, brighter, and scrubbed of those nasty little impurities. Lavender Silk is $11.99 for the 2 oz. and $18 for the 4 oz.  That, and all “Skin by Ann Webb” products are available at Pure Skin Medi-Spa, 1101 Eraste Landry Road. Call 268-9719 for more info. — Maria Capritto

BUT NO SHAVING FACE
Find fame through fur. Gentlemen (and sideshow women), let the beard growing begin. In conjunction with Breaux Bridge’s 150th anniversary celebrations in September, organizers have announced “Les Braves Barbes,” Breaux Bridge’s sesquicentennial Beard Growing Competition. They’re putting the word out now to give contestants time to grow that five o’clock shadow into a midnight mass. Competition day is September 12 in two divisions: one for men and the other for those crafting an artificial beard. Contestants will be judged on luster, grooming and degree of difficulty. And there are prizes to be won — in addition to bragging rights — including but not limited to ... drum roll please ... a commemorative belt buckle! Find out more by sending an e-mail to [email protected] . — Walter Pierce

GIVE THE FIDDLER SOME
David Greely of Steve Riley & The Mamou Playboys is a mad genius, magic fiddling man. Like some cultural scientist conducting precious musical experiments in a secret laboratory, his new CD, “Sud du Sud,” explores the finer elements of Cajun and Creole music — the subtleties of which would easily get lost in the Cajun bars and dancehalls. In it he mines a cappella ballads, poetic narratives, intricate waltzes for a wealth of emotion and nuance. Filled with original compositions that go back to back with themes based on classic Cajun tunes, it’s a sophisticated journey. Buy it at Barnes & Noble or DavidGreely.com — Dege Legg