After being devastated by four storms in four years, Grand Isle is rebuilding with an eye toward reeling in tourists. 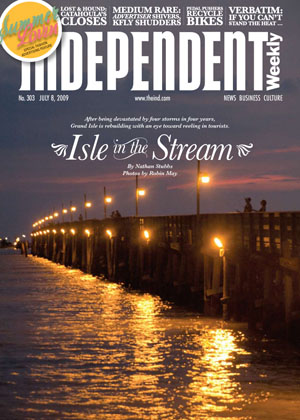 The Starfish Restaurant has all the elements of your typical ramshackle island eatery: a name taken from a ubiquitous sea creature; a front porch awning that leans in on itself, propped up by posts that jut out to the ground like crutches; the weather-worn, sky-blue paint job; and, of course, the smell of grease and fried seafood.

As early as the last week of June, The Starfish was already decorated for July 4th — the wait staff adorning tables with star-studded oilcloths and small American flags planted into each roll of paper towels.

Owner Jerry Vedros sits at a back table sipping ice tea. “Business is getting really good now, especially weekends,” he says. At 1:30 in the afternoon, half The Starfish’s tables are occupied with customers munching on plate lunches and poboys. “Sometimes it’s like this all day,” Vedros continues. “At times we’re so busy we can’t keep up. This year I think is going to be one of the best years we’ve had in the past seven or eight years. It’s getting back to where it used to be.”

The benchmark Vedros is referring to is pre-2005, before Hurricane Katrina upended this small fishing camp community. A thin 7.3-mile strip of land 50 miles due south of New Orleans, Grand Isle has for over a century been a prime vacation spot, fishing lure and low-rent rendezvous for everyone from 19th century privateer Jean Lafitte to well-heeled New Orleans bohemians to nearby oil industry roughnecks. One of the state’s last barrier islands, and home to some of Louisiana’s only true beaches, its exposure to the Gulf is both its main attraction and vulnerability.

Katrina pummeled the island, knocking out the bridge to the mainland, covering roads with sand and debris and uprooting every utility pole. The massive hurricane splintered the adjacent Elmer’s Island, and in the mayhem following the storm it was also falsely rumored and reported that Grand Isle had suffered a similar fate.

On the heels of Katrina came floods from Rita. Then, three years later, just as the island had begun to recover, Hurricane Gustav bore down on Grand Isle, washing beach dunes and large sections of levee onto Highway 1.

Visit Grand Isle today and it’s hard to picture this kind of devastation. The beaches are surprisingly clean, the water offshore is blue-green, and both leather-tanned locals and tourists as pale as the white sand flock to drink in the radiant sun and salty breeze. 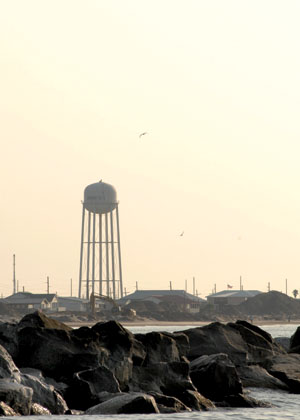 Here, rebuilding is a way of life. Statistics show that the island has been affected by tropical storms or hurricanes every 2.68 years since 1877, with direct hits occurring every 7.88 years. Vedros’ restaurant got 4 feet of water for Katrina and more damage during Gustav, some of which is still being repaired. “The good Lord does what he wants and no one can stop him,” Vedros rationalizes. “I always say that.”

To protect the island from future storms, the state and federal government are spending $18 million on new drainage pumps and millions more on new extra-fortified “geotube” levees, which pack sand inside of a 30-foot tube that is 200 feet long.

The island is also set to finally see a wave of new public facilities. This year the town plans to rebuild its fire department (currently housed in a donated section of an ATV shop), public library (now operating out of two book-filled buses parked out front of the tourism office), and school gymnasium.

The projects come after a lengthy standoff with the Federal Emergency Management Agency, which at first refused to fund any rebuilding projects that it located in a “V Zone,” areas that were deemed highly vulnerable to hurricanes.

Mayor David Camardelle, a Grand Isle native who graduated with a class of 13 in 1974 from Grand Isle School, has had to battle for state and federal funding for levee repair on Grand Isle. Camardelle and other locals even went so far as to design so-called “burrito levees” — clay wrapped in a black mat and topped with sand — as an efficient means of protecting their coast. Many government engineers told him the low-cost levees couldn’t be done. “They’ve got more degrees than a thermometer but not a lick of common sense,” Carmadelle says.

With all its rebuilding, Jefferson Parish officials are putting out the word that Grand Isle is open for business. Earlier this summer, they launched a $55,000 ad campaign, “Grand Isle Alive,” featuring billboards, radio ads, T-shirts, bumper stickers, banners and public television spots. The campaign will also include a Mardi Gras-style parade the week of Grand Isle’s big annual event, the Tarpon Rodeo, July 23-25.

With its relatively inexpensive camp rentals, Grand Isle is capitalizing on competition with more pricey condos on the resort beaches of Florida and having a bumper year for tourism. “I think that the economy has helped us in a weird sort of way,” says tourist commissioner Josie Cheramie. “Typically you have your ups and downs, but this summer’s been steady.” The steady flow of guests is a relief to many businesses, which saw tourism drop off as much as 50 percent since last year’s hurricanes.

Mayor Carmadelle has been a consummate salesman for the island. Perched up on the balcony of the Bridge Side marina and general store one afternoon, he looks out over the water and asks, “Where else in Louisiana can you go and get all this? We’ve got some of the best trout fishing, you can catch shrimp and crabs right off the beach. The crabs are running up on the beach. This is paradise.” 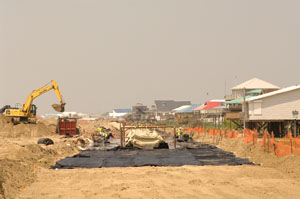 It’s just after 6 a.m. and the sun is a bright red disc coming up over the Gulf, illuminating the offshore oil drilling platforms that dot the horizon. While a front has brought in a breeze — upsetting the ideal calm waters for fishing — there are still several boats fishing the shaded water along the jetties and oil platforms. Across the beach, surf fishermen cast for trout and crabbers set their drop lines. Sea gulls and pelicans, also catching the morning tide, call out from across the water. Brown pelicans, once endangered, are now in abundance, flying in lined formation and perching themselves on every available offshore surface: trees, rock jetties, the mechanical arms spanning out from shrimp boats.

Offshore, the water is clear blue. Porpoises surface, their backs rolling evenly just above the water. “Very intelligent animals,” says fishing guide Jules Bellanger, behind the wheel on his 20-foot bay boat. Several times, he says he’s witnessed the porpoises engage in a game with his clients. An unsuspecting fishermen will be reeling in a trout when suddenly the fish will start pulling back with an inordinate amount of strength. A porpoise will then emerge with the fish in its mouth, still on the line. If the fisherman stops reeling, the porpoise then will let it go and hold the fish on top of its nose, daring the fishermen to try to snatch it away from him. “They just want to play,” Bellanger says.

Born and raised on Grand Isle, Bellanger has had his hands in several careers. He briefly tried commercial fishing but found it too hard to pay the bills. Now, like many locals, he works for an oilfield service company. When his company had him start taking clients out fishing, he decided to spin it off into his own business, H&M Fishing Charter. “I run a boat, my wife runs a boat, and my daddy runs a boat,” he says.

Bellanger has seen a lot of changes to Grand Isle over the years, especially since Katrina. Several local camp owners talk about how Katrina and Gustav actually helped “clean up” the island — washing away old debris, as well as unsightly trailers and run down camps. Bellanger doesn’t see it in such sunny terms. “It got rid of a lot of history,” he says. “Some of the oldest camps and houses got tore up, stuff that’s been here as long as I can remember, it’s just gone.” 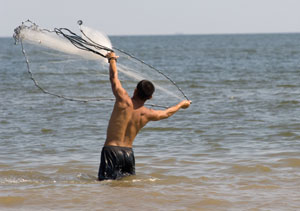 While there are vestiges of the storms — some boarded up camps yet to be repaired — there’s more evidence of a building boom. According to the mayor, the island is now growing at a rate of about three homes a week, including both new construction and rehab jobs. Grand Isle used to only need one building inspector; now, it has three. The island’s population is rapidly nearing its pre-Katrina plateau of 1,500.

Much of the new development has been geared toward the upper income brackets. You can find million-dollar yachts parked at some of the private marinas, $350,000 condominiums that cantilever out over the water, and some resort camps on the market in the $1.5 million range. Two new gated communities, slated for upper income housing, are currently being developed.

This trend has created an issue for working class families looking for housing. Starfish restaurant owner Vedros also owns a 16-room motel on the island. He says all but three rooms in his motel are occupied by his employees, renting on a weekly basis.

“It’s very had to find a place to stay,” he says. “A lot of really good people come down here that just can’t find a place, or can’t afford one.”

Mayor Camardelle, now in his fourth term, acknowledges there’s a housing pinch, exacerbated by the fact that property owners are now finding it more profitable to rent homes to weekend vacationers than to locals in need of a place to stay. “This is a new challenge,” he says. 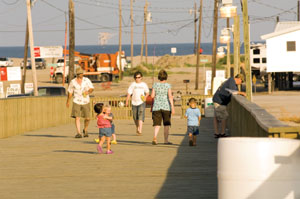 Grand Isle is an inexpensive weekend getaway for crabbing and soaking up the sun. But the island is increasingly becoming a destination for high-end adventurers.

Another issue eating up the mayor’s time lately is a new toll bridge from Leeville to Port Fourchon set to open later this month. The bridge will effectively tax any Grand Isle resident who needs to get off the island to visit the nearest bank, drug store or hospital. It also plans to use “open road tolling” — requiring travelers to set up toll tag accounts or buy one-time passes — in lieu of toll booths. Many fear the system will result in too many fines and turn off Grand Isle tourists.

“Every day is a challenge for me to convince the government of the importance of Grand Isle,” he continues. “If we can dodge one more year in Louisiana without a major hurricane, we can really get some major work done with coastal erosion.”

But Camardelle is optimistic about where Grand Isle is headed and wants to build on the success he’s had thus far with levee projects and with making the island a more attractive tourist destination (Camardelle is largely credited with cleaning up Grand Isle’s beaches).

His vision for the future involves burying all the island’s power lines, bringing back parades, and planting a palm tree on every corner. “This’ll be paradise,” he says.