A culinary icon shutters its doors 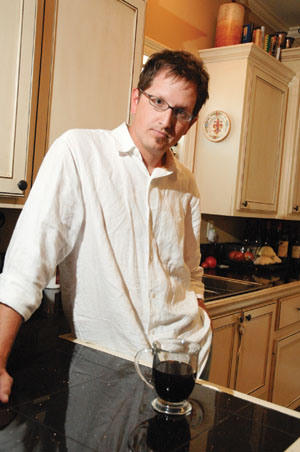 Former Catahoula’s owner and chef Jude Tauzin is optimistic doors will open for him in Lafayette.

Acadiana has one less dining destination: Catahoula’s in Grand Coteau has closed its doors. A victim of the economy and the drive to the historic town in St. Landry Parish, chef and owner Jude Tauzin extinguished his flames for the last time after dinner late last month. “I’ve been struggling for a while. I couldn’t hang on anymore,” says Tauzin.

The menu was not an issue, Tauzin notes. “The response was always positive food wise and service wise. And that’s what makes the whole thing difficult. If we were really doing something wrong, I could see us having some problems. But I don’t think we were doing anything wrong.” As the economy turned sour in the fall of 2008, Tauzin says he was starting to see a slowdown.

“People were still coming in, but you could tell they were cutting back. Instead of getting a $50-$60 dollar menu, they were getting a $30 menu. Once January 2009 came around, it never came back. The last five months were the final blow.”

But even more daunting than the stockmarket roller coaster and a floundering economy that is only now creeping into Lafayette, Tauzin cites a changing environment in Louisiana when it comes to drinking and driving as a deciding factor.

Zero tolerance on the highway is on a collision course with Louisiana’s culturally ingrained attitude about imbibing. And when it comes to destination, fine dining restaurants where wine is part of the experience of a great meal, customers are having second thoughts about hitting the road. “A lot of my clientele came from Lafayette,” says Tauzin. “The people I spoke to, it wasn’t necessarily the [length of the] drive. When they came to the restaurant and had something to drink, they were concerned about driving back to Lafayette.”

The beautiful restaurant, located in a former general merchandise store in historic Grand Coteau, was one of the premier eating establishments in the area. Founded in 1996 by John and Hillary Slaughter, the restaurant featured innovative seafood dishes and huge photographs of Catahoula hounds, shot by photographer John Slaughter. An Opelousas native, Tauzin holds a degree in culinary arts from Johnson and Wales University. He cooked at Oakbourne Country Club, Le Triomphe and managed the Townhouse before being approached by the Slaughters to take over the business. He arrived at Catahoula’s in 2006, working first as chef, then as owner of the business by January 2007. He took the cooking to new heights, garnering accolades from foodie journals like Southern Living and Gourmet magazine.

Before Tauzin’s arrival, Catahoula’s had gone through some uneven patches, suffering from a lack of a coherent palate. Dishes were loaded with so many ingredients that each bite was a confusing jumble of flavors. Focusing on first-rate ingredients with a sensibility toward layering tastes is one of Tauzin’s strong points. In November 2008, Catahoula’s made The Independent’s “Top Ten Restaurants” list. The recommendation, in part, read: “There’s a lot to love on this menu, from the rich crab and corn tart to the seared foie gras or a beautifully executed dish of scallops paired with creamy shrimp and black truffle rice. Tauzin plays on Louisiana themes. His seared lamb tenderloin is glazed in citrus fig demi glace, and the grilled fish of the evening, topped with crabmeat in a lime-tequila sauce, comes with a sweet potato grits cake.”

The Slaughter family didn’t stay out of the restaurant world for long. In April 2007, John D. Slaughter, John and Hillary Slaughter’s son, along with entrepreneur Brach Myers, bought the former DOE’s on Pinhook and reopened it as Catahoula’s Steakhouse. Tauzin was briefly involved, and allowed the good reputation of the Catahoula’s name to lend a hand to the new steak house.

He soon came to regret it. In a Feb. 10, 2009, letter to the editor in The Independent, he wrote, “As the chef and owner of Catahoula’s in Grand Coteau, I’ve been put in the unique situation of having another restaurant open just down the road with the same name, which was never supposed to be the case. At the outset, Catahoula’s on Pinhook was supposed to be Catahoula’s Steakhouse. That was the initial idea to which I agreed. After about two months though, its menu changed to reflect more of what I was doing in Grand Coteau and not a steakhouse at all. People might ask, ‘Why open another Catahoula’s just 15 minutes away?’ That’s exactly what I said.”

When Catahoula’s Steakhouse closed in December 2008, customers who had bought gift cards were miffed that they could not use them at the Catahoula’s in Grand Coteau. Ultimately, in a gesture of good will to the community, Tauzin decided to honor the gift cards even though he had no financial stake in their sales. The incident drew some angry letters to the editor in The Independent. Tauzin believes the gift card fracas left a bad taste in people’s mouths and perhaps contributed to the slowdown in business this spring. In April, John D. Slaughter opened a drive-thru eatery in Carencro, called LA Fish Fry, and the family still owns the Grand Coteau building.

Tauzin has been working to place his staff in jobs in the area before finding new opportunities for himself. He says he doesn’t want to leave Acadiana. Becoming involved in a restaurant in Lafayette has certainly crossed his mind. “Over the last year or so, on a night when it was slow, the comment was, ‘If you were in Lafayette, you would be packed every night of the week,’” Tauzin says. “I’d definitely like the opportunity to see that. I’ve had a couple of people approach me just in the last day. Id like to stay here. But I have to decide what’s best for me and my family.”