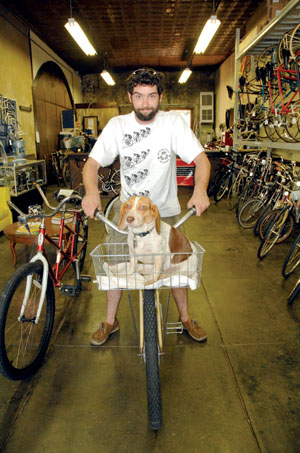 “I’ve had a passion for bikes my whole life. My father and I have been riding bikes since I was a kid.”

William Atkinson Jr. is still a kid when it comes to bicycles. Twenty-six with a lumberjack beard and a connoisseur’s enthusiasm, the St. Thomas More grad put on his big boy apron a few weeks ago and opened a bike shop like no other in Hubtown — Recycled Cycles of Acadiana. Part retail bike store, part repair shop, part museum of antiquities, the little business faces Parc Sans Souci on Vermilion Street next door to Agave Restaurant. Bikes ready for sale line the sidewalk out front, and the shop, part of the old Tribune Printing Plant building, is packed with them. Near the front window, some gems of yesteryear await repair and refurbishment — a 1941 Schwinn Admiral, the model at the center of “Pee-wee’s Big Adventure,” shows its years beside a similarly venerable Murray sporting art deco lines. Above them in the display window hangs a Swiss Army bike. “That’s the most valuable bike in the whole store,” Atkinson says with detectable awe, “five grand.” While Swiss Army bikes, like the namesake knives, are tricked out and adaptable to happenstance, it’s probably prudent the Swiss are neutral in wartime.

In the back of the shop, bike builder Don Smith, sporting a bushy Edwardian mustache (What is it about bikes and facial hair?), is hard at work. Smith has made a name for himself by welding his own customized bikes, some modeled in spirit of Victorian penny-farthings (huge front wheel, tiny rear wheel). Atkinson says building custom bikes is also in the business plan.

And while the vintage bikes garner attention on the showroom floor, Recycled Cycles of Acadiana is mostly a place where customers can select contemporary used bicycles — cruisers and racers mostly — that have been restored and nursed back to good working order. There are also a few new bikes, including from a California company called Nirve.

Some of these bikes are donated, and Atkinson admits he’s also a familiar face at garage sales, although he’s vague on the exact dimensions of his supply line. “It’s kind of a secret,” he says slyly. “I don’t like to give out too many details, but I will say that we want to get bikes from everyone; people bring in old bikes and we buy them from them for a decent price. We fix them up, get most of them in perfect riding order and sell them for a decent price.”

It was while a student at Colorado Mountain College in the Rockies where cycling is literally an up and down affair that Atkinson really rolled upon the Nirvana of classic bicycles: a 1936 Roadmaster Deluxe. It was given to him by an elderly man Atkinson helped out of a jam. Atkinson still has the bike and is restoring it.

He admits the concept of selling recycled bikes isn’t new. A shop in Fort Collins, Colo., provided the inspiration for Recycled Cycles of Acadiana. “Just the coolest bicycle store I’ve ever seen,” Atkinson recalls, “That’s kind of where the dream started actually. I was in college, I went there: ‘I’m going to have me one of those one day.’”

Now he has one, and his first week was gangbusters: 13 bikes out the door. That’s solid commerce for a shop of this kind in a culture that likes it new, likes it disposable, and thinks of recyclables as stuff you throw out.

This is actually Atkinson’s second bike-related business venture. “We did bicycle messengers in Lafayette, and it lasted about three months and I couldn’t get a single client.”