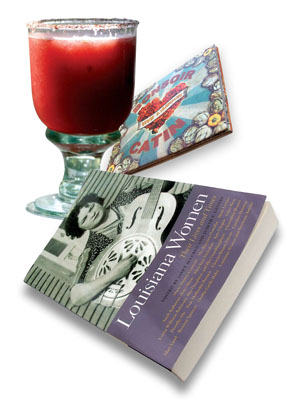 GENDER SPECIFIC
If you haven’t heard of Oretha Castle Haley, it’s time to get to know her. She was a force in the civil rights movement in Louisiana in the early 1960s, and one of more than a dozen figures in Louisiana Women: Their Lives and Times (The University of Georgia Press), a collection of biographical essays spanning Louisiana history from the colonial period to the present. Richly annotated and written by academics — most with ties to Louisiana universities including UL Lafayette professors Mary Farmer-Kaiser and Mary Ann Wilson — Louisiana Women is a fascinating study in how women have preserved and exemplified our culture, as well as challenged gender, racial and economic mores. There are the familiar names — Voodoo priestess Marie Laveau, writer Kate Chopin, folk artist Clementine Hunter — and there are the obscure but equally fascinating likes of slave turned slave owner Marie Thérèse Coincoin and Coushatta Indian Louisa Williams Robinson. In many ways, these Louisiana women comprise a diverse group, but they share commonalities in gender, geography and gravity. Louisiana Women retails for $24.95 and is available at all major retailers and online. Several of the contributors will be on hand at 2 p.m. Saturday at Barnes & Noble for a book signing; Cajun musician Helen Boudreaux will also perform. — Walter Pierce

HEAT WAVE
When I read this cocktail recipe in the New York Times one 104-degree day last week, I was immediately drawn to the idea of a sweet and sour, watermelon and lime cooler. So I went home and started muddling. It wasn’t until I read the rest of the recipe that I realized this is a cocktail made for us. Note the rime on the rim — salt, sugar and cayenne — south Louisiana in a sweet, salty, peppery sip. I made one alteration, substituting cachaça, a Brazilian sugar cane liquor, for the joven mezcal and tequila in the original recipe.
Watermelon Cooler
1 teaspoon kosher salt
1 teaspoon superfine sugar
1/4 teaspoon cayenne
2-inch-wide cubes watermelon
3/4 ounce simple syrup
3/4 ounce fresh lime juice
2 ounces cachaça
On a small plate, mix salt, sugar and cayenne with a fork. Lightly wet rim of a medium cocktail glass with water or lime juice, and dip glass on plate, coating rim, then tap to shake off excess.
In a cocktail shaker, crush watermelon with a muddler or long-handled spoon. Half fill the shaker with ice and vigorously shake the watermelon, syrup, lime juice and cachaça. Strain into glass and serve. — Mary Tutwiler

LONG LIVE LOVE
Bonsoir Catin are the Cajun Queens of Acadiana and nobody can figure out how to stop them! Their new CD Vive L’Amour is KILLER. Plus it was produced by Dirk Powell for Valcour Records. In this album, you get treated to everything from pre-war European ballroom balladry to slamming Cajun dancehall tunes to ancient blues artifacts that get dug up from the bowels of Dirt Earth. There’s even old school country by way of a Dolly Parton song that’s been transcribed to French. These chicks are on their game, sharing vocal duties over a mixture of very, very old archival gems and some brilliant originals written by Kristi Guillory. Buy it on the Web at bonsoircatin.com or at Johnson’s Boucaniere. — Dege Legg