Ahead of next week’s vote by the Lafayette Consolidated Council on whether to phase out funding for non-governmental organizations, support for the Hub City’s most visible and celebrated non-profit organization/event — Festival International de Louisiane — is pouring in from around the country. News of FIL’s $72,000 in city-parish funding being in jeopardy has been widely publicized by local media since the LCC voted unanimously last week to advance the funding phase-out ordinance. Since then, at least two out-of-state pleas to keep the funding intact — one from a California couple, the other from a Florida man — have been e-mailed to the council. 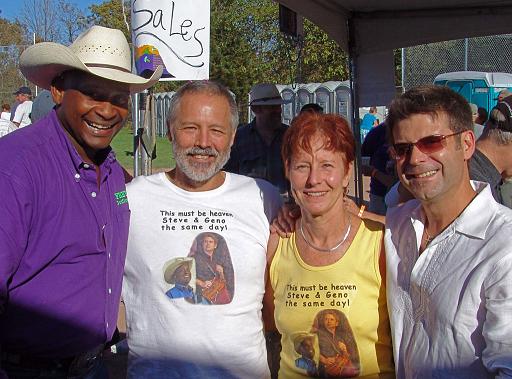 “Between hotels, restaurants, entertainment costs and assorted local buying I have spent many dollars over these past 12 years of my regular visits to Lafayette,” writes Clearwater, Fla., resident Chuck Peterson in a message sent today to council Chairman Purvis Morrison and obtained by The INDsider. “I think I have a valid reason to speak out on this issue.” Peterson, who identifies himself as a “Cajun at Heart,” characterizes the annual April event as a first impression of Lafayette that has led to subsequent visits to the city for Acadiana’s unique culture. “The Lafayette community, the unique Cajun/French culture it embraces and perpetuates and its support of the arts is unlike any I’ve found in my extensive travels through the U.S.,” Peterson concludes. “Please keep your community treasures intact.”

Peterson’s missive comes just days after a similar plea sent to the entire council from Nevada City, Calif., residents Tony and Karen Loro (pictured with Geno Delafose and Steve Riley at a California music festival), who have attended FIL twice in the last five years:
Our love of Cajun and Zydeco music originally got us to New Orleans but after one visit to the festival’s Web site we saw who was playing and how much music there was available during the festival we decided to extend our next visit and we stayed in Lafayette for 6 days. The next time we went we set the record for the longest stay at the bed and breakfast we were in, eight days. We eat out lunch and dinner every day. ... We attend all kinds of music festivals in California and we have two of them in our own hometown. But I have to say that the amount of fun and good times available in Lafayette during Festival International pretty much slaps the #@$ out of anything else we go to. As it stands next year we have two vacations planned: Thailand for six weeks, Festival International for two weeks.
The LCC will vote July 21 on the ordinance by William Theriot and Jared Bellard that would shift more than $450,000 in direct city-parish funding for FIL and 30 other non-governmental organizations — arts/culture groups as well as social service agencies like Big Brothers/Big sisters and Volunteer Instructors Teaching Adults — to the Community Foundation of Acadiana and phase out that funding over a three-year period. Do Theriot and Bellard have the votes to push the ordinance through, and why is City-Parish President Joey Durel — a longtime supporter of cutting external agency funding — against the ordinance? Read more about the NGO funding dilemma in Wednesday’s edition of The Independent Weekly.