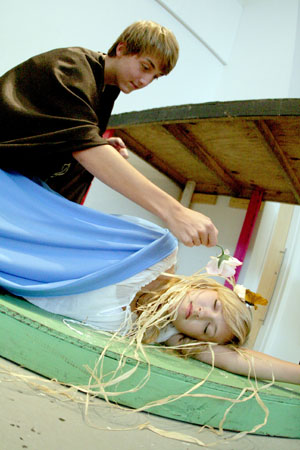 Chance Briant as Oberon and Brooke Gleason as Titania, king and queen of the fairies in A Midsummer Night’s Dream.

You spotted snakes, with double tongue, Thorny hedgehogs, be not seen; Newts and blind-worms do no wrong; Come not near our fairy queen. Lines so familiar and magical should trip off the tongue of every student of the English language. But alack, alas, Peaseblossom, Cobweb, Moth and Mustardseed no longer inhabit the imagination of today’s youth. Amy Waguespack is out to rectify that, directing 40 students in a summer Shakespeare camp production of A Midsummer Night’s Dream.

The play will be the seventh annual Summer Youth Shakespeare ensemble production led by Waguespack, director of Acting Up in Acadiana. Students range in age from 9 years old to high school seniors. The two-week camp, which began on June 5 at the Acadiana Center for the Arts, is an intensive performing arts experience.

“Only kids are tenacious to attempt such a thing,” says Waguespack. “It’s too daunting for adults.”