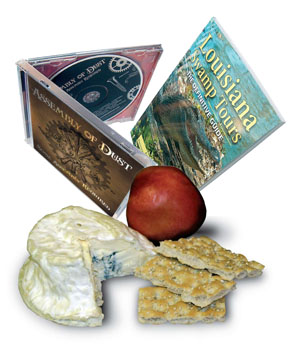 AH, THE POWER OF CHEESE
Who says you can’t make cheese in Louisiana? New Orleans has a long tradition of Creole Cream Cheese, a delicate curd bathed in fresh cream. But it took Chef John Folse to explode the myth that hot weather milk can’t be coaxed into high quality aged cheeses. His award-winning triple-cream cow’s milk cheese, Fleur-de-Teche, snaked through with vegetable ash, is as fine as the best France has to offer. A pair of goat’s milk cheeses, Evangeline and Gabriel, are particularly delicious, with a nice balance between the chalkyness of fresh goat cheese and the mellow melting texture of an aged cheese. I’ve been looking for the Bittersweet Dairy cheeses since they hit the market, but they have only been available in Lafayette through Folse’s Web site, www.jfolse.com, until now. Happily, Rouse’s Supermarket in Youngsville, another Louisiana-owned company, carries the Bittersweet brand. Call Rouse’s at 362-2814 to make sure it has received a shipment. — Mary Tutwiler

SEND MORE TOURISTS, THE LAST ONES WERE DELICIOUS
Don’t leave home without this book. Louisiana Swamp Tours: The Definitive Guide, is that handy sort of listing Bayou State dwellers should have in their glove compartments at all times. For those of us who drive the back roads for entertainment and long to embark on watery explorations, this is the key to the bayou. St. Francisville author Anne Butler offers detailed information about how to get up close and personal with the state’s exotic wildlife like alligators, egrets and nutria, in a listing that ranges from Grand Isle to Gibsland. Don’t like the water? She also throws in a few seaplane tours for a bird’s eye view. Published by Pelican Press, Louisiana Swamp Tours can be found in local bookstores. — MT

DUST TO DUSTED
New York City may not be the first place you think of when you think of rootsified rock and roll, but NYC band Assembly of Dust has put together a collection of songs that might make some old Arkansas hayseed proud. With a formidable list of guest musicians that reads like a laundry list of “musician’s musicians” — Bela Fleck, Richie Havens, and Louisiana’s own Theresa Anderson among others – its new CD Some Assembly Required darts from alt-country to old Nashville cowboy chording to late 60s Woodstock folk roots à la The Band. Seems like everybody wants to be The Band nowadays. Can’t blame them. Buy it at aodust.com . — Dege Legg