A state Alcohol and Tobacco Control hearing set today for Eric Cloutier, part owner of Marley’s Sports Bar and Karma on Jefferson Street downtown, was postponed until August. The 34-year-old former Louisiana IceGator was arrested last February on 505 charges. Those charges have since been consolidated into 15 including money laundering. Mike Parrish, who also has an ownership stake in the bars, did not return phone calls seeking comment. 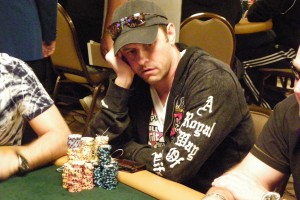 Cloutier, meanwhile, has evidently been riding high in Las Vegas as a participant in the World Series of Poker. A story posted last week on the Web site of Bluff Magazine (including the photo at left showing Cloutier amassing chips) even hailed him as an early leader under the deliciously ironic headline, “WSOP: Eric Cloutier Beats Clerical Error to Claim Day 2a Lead.” The article recounts how Cloutier apparently mis-reported his chips at the end of day one’s action, listing his total as 150,750 chips instead of the actual count of 15,750. Cloutier is accused by state officials of committing felony “clerical errors” by rigging cash registers at his bars to under-report sales and dodge taxes.

The former professional hockey player is apparently an adept poker player, evident by his easy use of poker-ese in the Bluff Magazine article: “In one hand I made a weak beat on the end, he raised me and then I moved all-in. He called me with ace-high and I had a pair of twos and that put me up over 60,000. Then after that it went aces, kings, queens — I got a lot of good hands.” According to a post today on RecentPoker.com, Cloutier bowed out in day six of the tournament. His earnings in the tournament, if any, are unclear.