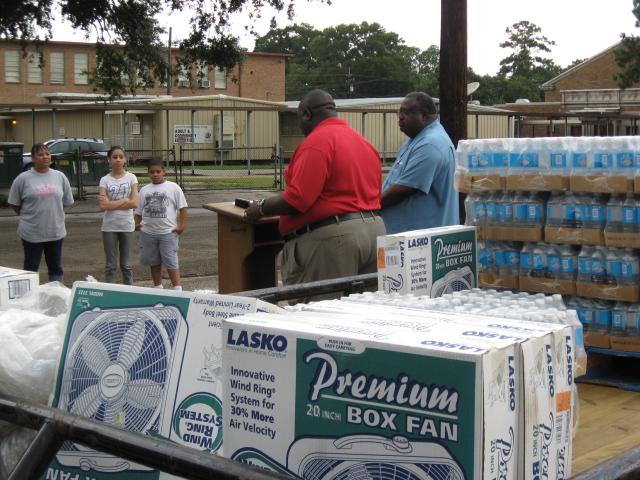 Dozens of Lafayette residents in need of a respite from the swelter got a little relief Wednesday through the donation of electric fans and bottled water. The donation — 50 fans and 100 cases of water — from Lafayette residents Leroy and Joyce Richard was coordinated by Dist. 4 Lafayette Consolidated Councilman Kenneth Boudreaux and distributed at the Domingue Rec Center on Mudd Avenue. “I’ve been blessed and have everything I need,” Leroy Richard said, “and I’m trying to help somebody else.”

When the Richards decided to make the donation, they contacted Boudreaux, who got in touch with churches and civic groups in his district to find out who needed help the most. “This is God-sent,” Boudreaux said of the donation. “I’ve been trying since in office to let people know about the plight of people in need.” The councilman also indicated that arrangements are being made to get air conditioners to some elderly residents, one of whom actually declined the offer out of fear she couldn’t afford the increased electricity bill.

In less than a week, Boudreaux and his fellow councilmen will vote on an ordinance that would phase out funding for more than a dozen social-service agencies that currently receive a direct cash donation from Lafayette Consolidated Government. Boudreaux tells The Independent Weekly in this week’s cover story that he’ll vote against the measure, and said Wednesday “we still need to do our part as government, but we welcome the participation of the private sector as well.”