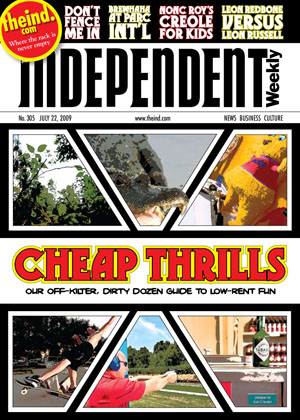 A little squeezed for cash right now but looking for some excitement? We can relate. And while it seems that south Louisiana shuts ’er down during the summer swelter, there’s joy to be had on the cheap. Herewith, staff writers and contributors to The Independent share their secrets on passing a good time without passing too many bucks.

River Run
The Ouiska Chitta River is not for thrill seeking white water rafters, viking boat racers, or any kind of real athletes. This slow, meandering stretch of water just west of Oberlin in Allen Parish is meant to be enjoyed at a leisurely pace. Pack an ice chest, bring the dog, bring a tent to camp out. Put on some shades, pull down your hat and admiral your canoe by leaning back, taking in the scenery and paddling as little as possible.
Stop at each of the little beachheads and lie down in the sun, go for a swim, drink a Miller High Life (the champagne of beers).

You’ll encounter plenty of wildlife: drunks, birds, turtles, more drunks. The river flows through the northern end of an area once known as Imperial Calcasieu or “no man’s land” — home to bandits, bushwackers, outlaws, cutthroats, scallywags, ghosts, desperados and other assorted and sundry characters (think Deliverance). Unspeakable crimes and untold treasure have been buried along the banks, rumored to be an old hideout of pirate Jean Lafitte and his band of privateers. You may stumble upon Lafitte’s lost riches. More likely, you’ll just walk away with a sunburn, some sand in your shoes and all of your trash (don’t leave it behind). If you don’t have your own vessel, canoe rentals start at $35 a day. — Nathan Stubbs 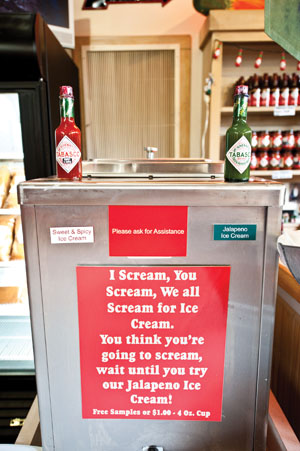 Hot Ice
What’s hotter than hot? Ice cold Tabasco ice cream. In the gift shop at Avery Island there are tons of things to sample — virtually every sauce and product Tabasco sells. There is also its own blend of ice cream — not available in stores. Tabasco offers Sweet & Spicy and Jalapeno. It may sound peculiar but there is no such thing as bad ice cream. Jalapeno packs a tingle on the tongue and a nice, smooth pepper flavor. Sweet & Spicy lives up to its name, mixing the yum of ice cream and a slight slap to the taste buds. Both are free to sample or for a buck a cup. — Nick Pittman 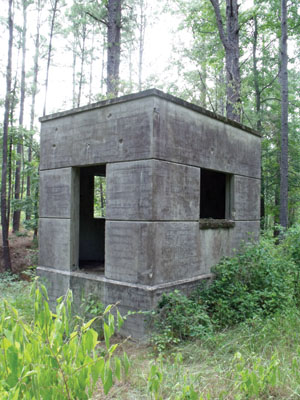 Spooky Ruins
Mother Nature may have taken over Camp Claiborne, about 15 miles south of Alexandria outside Forest Hill in Rapides Parish, but the imagination runs wild. Once the site of a sprawling Army camp during World War II, these rolling hills are now part of Kisatche National Forest, and the feds — thank goodness — have left well enough alone: Pine and hardwood thrive, criss-crossed by the remnants of asphalt roads squeezed by bramble and vine. And there in the deep, dark distance, as you cruise quietly through the sun-dappled forest, an occasional white-tail deer darting nearby, is a weathered concrete building, its original purpose unknown. Bat colonies and mystery abound in the few dozen ruins dotting the forest, some of them large and multi-storied with rusty iron ladders that disappear into openings in the floor, the sound of water dripping deep below; but you have to find them — by accident — and therein lies the fun of exploring Claiborne. Take I49 north to the Forest Hill exit; head west on La. 112 to U.S. 165 North and rejoin 112 W. Admission and spooky jitters are free. — Walter Pierce 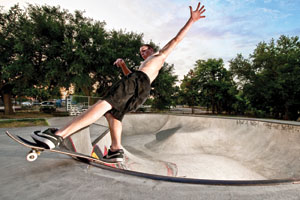 Skate or Lie on the Couch (like a lazy bum, depressed about all kinds of stuff)
You want cheap? How about free! You can’t get cheaper than free, greedhounds. Whether you are an old school dude who ain’t dropped-in in 15 years or a young blood who can rip at will, grab your skateboard and head over to the new city-built concrete bowl at the ramp park behind the Goodwill on Johnston Street. The best kept secret in town won’t be a secret for long as more and more skaters gravitate to the 7-foot deep bowl complete with vertical extension, fitted steel tube coping, and smooth glassy flat. It’s the most fun you can have on a piece of wood, and it’ll burn off that beer gut you’ve been sucking in for the past year. — Dege Legg

Me gusta los tacos
When you enter Carniceria y Taqueria Los Tres Hermanos, don’t go looking for that button that offers you a choice of English or Spanish. You eat here, gringo, you’d better habla Español. 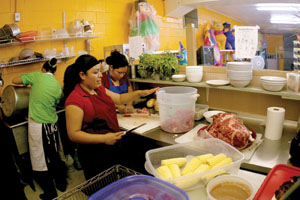 You want authenticity? The Three Brothers Meat and Taco Shop might as well been time-machined, cheap souvenirs and all, straight from downtown Tijuana. You’ve got your piñatas, coffee cups with cute pink faces, your straw cowboy hats, never-ending Mexican music and even the requisite, painted 3-foot crucifix lying on a cabinet. There are four aisles of south-of-the-border products, which, since the ingredients are written in Spanish, are a mystery.

Lunch is a serious treat. I ordered two pork tacos and would have gone for more if I’d had any idea what it all was. Think Cajun food is hot? Have ’em sprinkle their chili pepper on your meal, amigo.
You’ll find Carniceria y Taqueria Los Tres Hermanos on the corner of Eraste Landry and Easy Street. If you don’t have a phone book, their number is also painted on the side of the building. The girl at the counter said she’d been here a year, but I couldn’t tell if she was referring to herself or the store.
Me, I’ll be back. Really liked that food and really want that crucifix. — Don Allen

Invade da Ville
Head on over to St. Martinville and start out with one of the best snowballs in the world, from the iconic, no-name, mint green cinder block stand on Main Street. The ice is ridiculously fine and they are never stingy with the syrup. After your tongue has been stained in a new hue, bounce a couple of blocks away and visit the famous St. Martin de Tours Church, one of the oldest and most beautiful churches in the South. Directly behind the church is the St. Martinville Cultural Heritage Center, home to the African-American Museum and Museum of the Acadian Memorial, and both can be toured for only $3. Finish off the afternoon under the famed Evangeline Oak, and don’t forget to bring your copy of Longfellow’s famous poem to enjoy while you saturate yourself in history, all for only $4 (including the snowball of course). — Maria Capritto 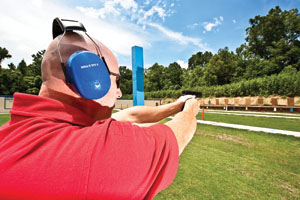 Shoot ’em up
Have a gun and ammo lying around? Pack ’em up and head to the Lafayette Parish Sheriff’s Office shooting range and exercise your Second Amendment right. On Saturdays from 8 a.m. to 2 p.m. the range is free and open to civilians. Bring your own target, undergo a short orientation course (for first-timers), sign a personal-injury waiver and fire away. Safety officers are on hand to keep things orderly. You can shoot from up to 50 yards. The range is located at 350 Michael Ann Road in north Lafayette near Acadiana Park. Even Google Map couldn’t find it, so call 236-5607 (LPSO) or 236-5665 (range) for directions. But good luck finding ammo in the Obama era. Sure as shootin’ I’ll probably, well, never mind. — WP 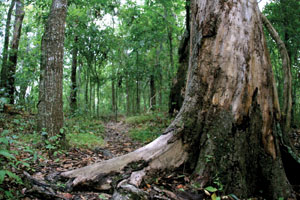 Put down the remote control, get off your butt, and make the nature scene at Lafayette’s little-known Surrey Street Arboretum Trail. Located just off Surrey alongside Bayou Vermilion near the airport, the trail makes for a nice jaunt through the flora and fauna, scenic woods, and a whole lot of dirt. Running roughly 1 mile in length, it’s a perfect 30-minute getaway for the wound-up city dweller tired of feeling like a loose nut rattling around the bowels of the unforgiving and merciless machine of the modern world. Drop in, Walk on, and Freak out. — DL

Poor Man’s Petting Zoo
Admission to the zoo too steep? Double back on the Thruway and swing into Gator Cove for some hot gator-on-gator action. In its huge tanks, untold amounts of alligators are just hanging out waiting for you (usually they are piled on top of each other in some cold-blooded king-of-the-mountain game). Luckily, the tanks safely contain the reptiles — but, there are portholes for you to have a peek. On the petting end of things, there are always critters like goats and chickens wandering around for your tactile amusement. — NP

Fire in the (News) Hole
Some caveats when making a fire balloon: don’t do it in dry conditions, near trees, buildings or peace officers. In other words, find a wide open space before trying this dumb-tacular feat of floating fire. The process is simple: 1. Fold the four corners of a broadsheet newspaper together (not a tabloid; The Advocate works best because it’s larger than The Advertiser) and twist the tips tightly; 2. Puff up the paper balloon and fold out the edges so they’re diametrically opposed; 3. Set the balloon on a fire-proof surface; 4. Light the corners (works best with two people lighting two corners each) and stand back. Once the fire fully engulfs the paper, your balloon should rise 20-30 feet before breaking apart into soft orange embers that extinguish before floating back to earth. For best results, light your fire balloons on a dark, windless, low-stupidity night. — WP

Gator Bait
Do not attempt this at home. In fact do not attempt this at all. I scared the beejesus out of myself and my children and am lucky I’ve not been nominated for a Darwin Award (given posthumously to individuals who have come up with the most spectacular way of removing themselves from the gene pool.)

Years ago, before St. Martin Parish put up a gate, locked in summer, at the south entrance of the ring levee that surrounds Lake Martin, I took my three daughters for a hike one Saturday morning in July. That section of the lake is where the alligators nest.

If you’ve never seen one, an alligator nest looks like a large, wetish version of a fire ant hill, a messy mound right on the edge of the water. The eggs are not visible. Neither is mama. She’s submerged in the water a few feet from the shore, stealthily guarding her nest. If you walk past too closely, and believe me the levee is way too close, mama will lunge up onto the bank, raise herself up on her front legs and hiss.
This happened, girls shrieked, we backed off. But overcome with bravado, I decided to make a second pass. Girls (they were in the 5- to 12-year-old range) who had much more sense than I do, begged me not to and started retreating. I stalked forward. This time mama wasn’t taking any more guff off of me, and her lunge turned into a gallop.

I’m not sure what happened next, being occupied in sprinting top speed, but I know there was a lot of screaming involved. Girls wound up standing on top of the car. Mama gator went back to her nesting. No, she didn’t take a pound of flesh out of my butt, but it wasn’t pretty and I’m still scared, 15 years later. Cheap lesson. Thrill is gone. See you later, alligator, from a distance. — MT