Breaux Bridge trots out a sunset on horseback riding in the streets of the small, Bayou Teche town. 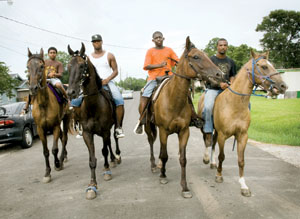 Last week, Jack Dale Delhomme, the mayor of Breaux Bridge, introduced an ordinance that would forbid riding horses within the city limits of the St. Martin Parish town. Delhomme made a passionate plea for the prohibition, which included a description of a horse that had died of starvation in a backyard stable in town, horses running loose that had to be rounded up by a police officer, sometimes on horseback himself, and a warning of the city’s liability, based on a private lawsuit where a Mustang car owner is suing a mustang horse rider for damages.

About a dozen of the town’s African-American residents, mostly in their 20s or younger, were waiting in the audience to speak against the proposed ordinance. Because it was an introduction rather than a public hearing, no comment from the public was allowed, so champions of riding in town left en masse, promising to return in August, when the ordinance would be open for discussion.

They had plenty to say outside the council chambers. “It keeps a lot of little black kids out of trouble,” says Joyce Landry, who has a small stable in her back yard where her extended family keep several horses. “All my great grandparents had horses,” adds John Williams, 26. “I had my first horse when I was 5 years old. I make my living with horses, cleaning stalls, feeding, brushing, taking care of horses in the neighborhood.” Landry estimates the predominately poor, African-American neighborhood is home to more than 200 horses, living in back and side yards. Residents are members of a dozen riding organizations like the Breaux Bridge Riders, Lee Boy Riders, Crazy Hat Riders, Outlaw Riders, Hip Hops, Savage Life, Good Old Boys and the Rope and Pin Riders who participate in trail rides on weekends, but ride in the neighborhood every afternoon. “When we don’t ride,” says Courtland Landry, 12, Joyce’s grandson, “we wash the horses. Or we stay up in the house.”

Landry and Williams call their neighborhood “Four Sides,” but it’s referred to by Delhomme as “The Back.”

“They were racing horses, five-abreast, in The Back,” the mayor, a horse owner himself, says, “and making a mess in the street. If it would be up to me, we wouldn’t have horses in town. They don’t belong on the streets.”

Horses being ridden in the streets and on the roads of Acadiana is not an unusual sight. Trail rides take place somewhere in Acadiana every weekend. According to former Gambit Weekly editor Michael Tisserand in his definitive book on Creole culture, The Kingdom of Zydeco, the trail ride as we know it today is a revival movement. “The neighborhood boucherie, a nineteenth and early twentieth-century social tradition, was once even more important to the survival of the community than the weekly house dance,” Tisserand writes. In the days before refrigeration, neighbors, on horseback or in wagons, would gather at a farmer’s house each Saturday to kill a few hogs; the meat would be shared around. Once electricity and the refrigerator arrived, the need for boucheries diminished. “Yet there remained a desire for the weekly gatherings, and by the late 1960s, country people had begun meeting on horseback, retracing the routes to the boucherie that was no longer there, in general agreement that the trail itself was worth the ride.”

Trail rides are big business these days, with sometimes up to 3,000 riders spending a weekend camping, cooking, dancing and riding the byways and not-so-back-road highways of the Cajun parishes. Zydeco musicians like Geno Delafosse and Jeffery Broussard have adopted the style, and in the case of Broussard, his band’s name — the Creole Cowboys — from the Wranglers and Stetsons.

Louisiana law actually prohibits livestock from traveling on state highways. The law reads: “It shall not be lawful for horses, mules, donkeys, or asses to go on the paved, black-topped and asphalt treated highways of the state system and the rights of way thereof.” But even the most perfunctory country drive is likely to include a horseman jogging along the grassy shoulder of the state highways that connect the small towns of Acadiana. For the most part, parish law enforcement officers turn a blind eye unless the rider is causing a problem by impeding traffic.

However, as the rural parishes of Acadiana become increasingly urbanized and traffic moves faster through what once were country highways, car culture and local equine tradition seem bound for a head-on collision.

Lloyd Rochon, former Lafayette city clerk and current city manager of the town of Carencro, says he’s seen horsemen riding on North University, within Lafayette’s city limits. “No more than a week or so ago, I saw [a rider] near the truck stop next to the I-10 overpass. It didn’t make sense to me. They’re riding the horses on these hard surfaces. I wonder how much damage it does to the hooves? You’ve got some crazy drivers. They could hit that horse, kill the horse and injure the rider.”

Like Delhomme, Rochon is looking at riding horses on city streets from the government’s perspective. “I can understand where someone would be thinking about maybe being sued from the actions of someone riding a horse,” says Rochon. “If you don’t prohibit it, people are going to take so many liberties it’s unbelievable.”

Currently Carencro, Broussard, Youngsville, St. Martinville and Lafayette allow horses to be ridden through town, as long as they don’t travel on state highways. The town of Scott allows horse owners to stable their mounts in town, but they have to be transported by trailer away from the city limits before a horseman can ride. Most local laws about livestock pertain to the health of the animal, the amount of land needed to support a large animal, (both for the welfare of the horse and comfort of neighbors), and pooper-scooper laws to maintain public sanitation.

Breaux Bridge enacted an ordinance April 14 to regulate the riding of horses on city streets. Ordinance 2165 states that all horses shall be ridden or led on the right-hand shoulder of the road in a single file, that no one may ride a horse on a city roadway after sunset or before sunrise, that persons under 14 shall not ride a horse in the city, that persons riding a horse shall conform to vehicular traffic regulations, and that no one shall ride a horse under the influence of alcohol.

When the new ordinance, 2169, was introduced last week, Breaux Bridge City Council members questioned the mayor on why a new ordinance was needed. “I asked the chief how many citations were issued [based on the existing law],” said councilman Glenn Angelle. “He said none. How can the police have such a problem and not issue a single citation?” Police Sgt. Leroy Calais, who is in charge of horse matters in Breaux Bridge, says he has no problem with people riding horses. “I never had to correct anybody since the first ordinance passed. The problem is loose horses. I have to get out of my police car and catch them, and go get my personal trailer and take them to the shelter. And there is the liability of them jumping out in front of a car or hurting someone. But I don’t care if people ride.”

Delhomme, however, doesn’t think horses belong in town, period. “I’ve had horses all my life. Riding horses and race horses. Common sense isn’t very common. I’ve seen people riding drunk, horses going sideways through the ditch. You do not ride on city streets, there’s too much traffic. Horses belong on grass in the country.” But the most telling statement of all from the mayor is charged with feeling for the welfare of horses. “We had to pick up a horse that was starving to death on the ground. Starving a horse, that’s a disgrace,” he says. “You don’t treat anything that way.”