AcA’s Gulf Brew returns for another round of specialty brews. 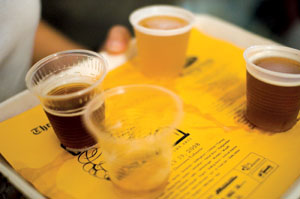 It could be argued that the invention of beer has been responsible for AC/DC, the mullet, unemployment, white dudes dancing and mud riding, but also quantum physics, the super collider, and V-2 rockets as well as an assortment of other innovations. One of the world’s oldest and most popular prepared beverages — coming in third behind water and tea — beer dates back to 9000 BC, way before the ancient Egyptians clocked out after a hard day’s work on the Giza Pyramid. Nowadays, brewing is a massive industry, comprising several major companies and thousands of smaller specialty brewers in towns across the globe that fetishize each and every hop, malted barley, and ingredient involved in the process.

Presented by Acadiana Center for the Arts, GulfBrew returns to Parc International for another summer gathering of swigging, sipping, tipping, and tasting. GulfBrew is Lafayette’s premier, not-too-high-falutin’ festival where the focus is not on entertainment but the beer itself. Cut to the chase, I suppose. Last year’s GulfBrew was huge: more than 1,500 people attended with taster tickets in hand. The 2009 Gulf Brew, scheduled for July 25, is expected to easily exceed that number.

Bigger and better seems to be the modus operandi with each successive GulfBrew. “We’re featuring 91 exotic brews as opposed to 80 last year,” says Jesse Guidry, marketing director for the event. “We’ve increased the tent size, the number of tents, the tickets sold, added a beer garden where people can relax.” For those who fear the mountain-pounding power and heat of the sun, let it be known that there will be air-conditioned tents, an increasingly common luxury component to any festival occurring in mid-summer in Louisiana.

Brewers include major venders like Schilling, Crescent Crown, and Glazer as well as tasty home brewers like Dead Yeast Society and Bayou Teche Brewery. Live music will be provided by Vagabond Swing, Corey Ledet and Snarky Puppy from 3-8:30 p.m.

Taste tickets are $25 each, and the event is strictly 21 and over. “Last year we had a line around the block,” says Guidry. “I encourage people to buy their tickets in advance, either online or over the phone so that they can avoid the wait.”