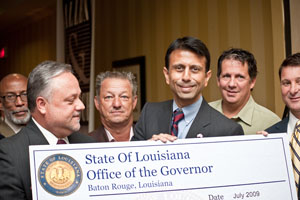 Gov. Bobby Jindal apparently needs to get his story straight. He opposed the American Recovery & Reinvestment Act — the Obama administration’s “stimulus plan” — from the get-go, assuming the posture of fiscal responsibility with several other GOP governors this spring, and he’s been touring the state of late telling communities small and large that we don’t do things in Louisiana like they do in Washington. All while the governor has been passing out stimulus money to municipalities in photo ops featuring humongous cardboard checks.

According to the U.S. Department of Housing and Urban Development, Louisiana received more than $176 million dollars in stimulus money in February, 10 days after President Obama signed the act into law. Of that, Lafayette alone received $440,016 in community development block grants, $672,893 in emergency shelter and homeless prevention funding, and $1,012,585 for the Housing Authority of Lafayette, for a total — from HUD — of more than $2.1 million dollars.

In an op-ed this week in Politico, Jindal panned the ARRA as “a nearly trillion-dollar stimulus that has not stimulated.” Yet as Think Progress, Bayou Buzz and other on-line sources were quick to point out, a sizable portion of the money the governor is doling out during his “Louisiana Working” tour is federal stimulus money. You’d never know it. The photo-op checks are emblazoned with “State of Louisiana - Office of the Governor.” No mention of the source of the funding. “Despite the fact that the checks contain millions of dollars of Recovery Act funds for job training programs, housing assistance programs, homelessness prevention programs, police training, criminal justice technology upgrades, and community development block grants,” TP reports, “Jindal has been printing his own name on the checks and taking credit for the money.”

(Editor's note: The check Jindal presented in Lafayette Tuesday, shown above in a photo by Independent contributor Ooti Billeaud, did not represent federal stimulus money.)