It was a big happy birther day on Capitol Hill this week as a staffer from the Huffington Post caught up with — and jogged alongside in many cases — almost a dozen Republican members of Congress to get their thoughts on whether President Barack Obama is a natural-born U.S. citizen and hence constitutionally qualified to occupy the White House. U.S. Rep. Charles Boustany is in the video and is one of a majority of GOP solons to give tacit credence to the long-ago discredited “birther” argument. 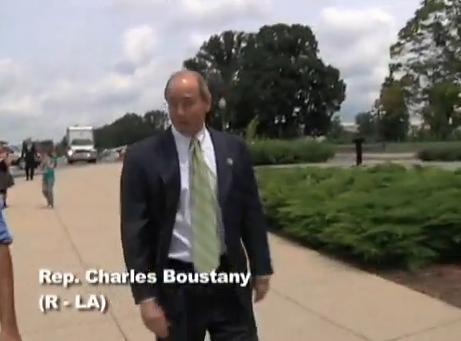 “I think there are questions. We’ll have to see,” the Lafayette congressman and retired surgeon replies on the run when pressed on the issue. In fact, only GOP Rep. Trent Franks, R-Ariz., pauses long enough to give a lucid response: “Actually, I believe Barack Obama was born in Hawaii when Hawaii was a state of the United States and therefore he is a constitutionally natural-born citizen of this country.”

The birther movement gained traction on the far right shoulder of the political road last year as the Illinois senator became the frontrunner for the Democratic presidential nomination. It moved from rightwing blogs to mainstream media in August 2008 when Jerome Corsi — he of Swift Boat fame — laid it out on Fox News.

The issue of President Obama’s country of birth — answered and documented to the satisfaction of mainstream news outlets — crept back into the news cycle in recent weeks when a major in the Army Reserve, Stefan Cook, filed suit in federal court challenging his redeployment on the grounds that Obama is not a natural-born U.S. citizen and therefore an illegitimate commander-in-chief. Cook’s attorney, California dentist-lawyer-real estate agent (we kid not) Orly Taitz, is the self-proclaimed leader of the birther movement who counts among her Facebook friends Republican National Committee Chairman Michael Steele, House Republican Whip Eric Cantor and GOP Reps. Mary Bono Mack and Cynthia Lummis, according to Politico.

The question, to most minds, was answered last fall when Hawaii’s governor and director of the state’s Department of Health both confirmed the birth certificate. FactCheck.org, a non-partisan truth-in-politics group — part of the Annenberg Public Policy Center of the University of Pennsylvania — also painstakingly confirmed the birth certificate, examined it in person, and produced birth announcements from August 1961 printed in Hawaii newspapers.

One of the arguments of the birthers — made a recently as July 17 by Taitz on CNN’s Lou Dobbs Tonight (Kitty Pilgrim was subbing for Dobbs and summarized the FactCheck.org debunking of the birther claims moments before opening Taitz’s mic.) — is that Obama has produced only a “certificate of live birth” from Hawaii, not a birth certificate. Louisiana birth certificates issued in 1994 and 1997 for two INDsider offspring are also titled “Certificate of Live Birth.”

Contacted Tuesday morning about the video, a spokeswoman in Boustany’s Washington, D.C., office replied, “We’ll get back to you.” This story will be updated when we get a response from the congressman.