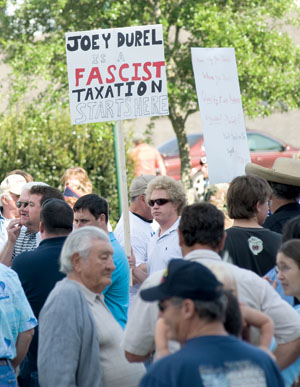 From the start the Tea Party movement has attracted a fringe element.

The conservative reaction to President Barack Obama and Democratic policy initiatives — the Tea Party movement — is alive in Republican-voting Acadiana. But don’t assume for a second as we did at first that the movement is monolithic or homogeneous; a recent case of mistaken identity at theind.com revealed a tipping point on the right’s ideological spectrum separating the whites from the yolks, or, the whites from the crackers.

This ideological fissure was revealed in an INDsider blog last week concerning a field trip by members of Acadiana Tea Party to Reserve, La., to give the business to four Obama cabinet secretaries appearing at a town hall meeting on rural health care. The article mistakenly drew an affiliation between the more mainstream Acadiana Tea Party and Baton Rouge-based Tea Party of Louisiana, whose Web site features a video, “The Obama Deception,” that likens Obama’s rise to power to that of Hitler and characterizes every U.S. president since LBJ as a pawn of the dreaded Illuminati. But it turns out, ATP and TP Louisiana couldn’t be further apart, and in fact there are two Tea Party groups representing Louisiana as well as two in Lafayette — Glenn Ellerbe’s ATP and Tea Party of Lafayette, whose spokeswoman is Joyce Linde. It was an earlier press release by Linde in which she details “joining forces” with TP Louisiana that led to the mix-up.

“Joyce Linde, months ago, was a part of my organization,” Ellerbe says, “but since then she went off on her own.” Tea Party of Louisiana was founded by Chris Comeaux, who, according to Ellerbe, was dismissed from the Louisiana Tea Party, with which ATP is loosely affiliated. Confusing, we know. The TP Louisiana Web site features several other paranoid videos meant to fan the fears of the fringe. Take for the example the claim made in the video, “Please Don’t Riot — It’s Just What ‘They’ Want”: “The global economic collapse is designed to trigger a stream of ‘benefits’ to the Illuminati agenda. One ... is to use this as an excuse to impose a global economic dictatorship controlled by a world central bank.” The video is from British writer and professional paranoia peddler David Icke, whose central theme in several books is that the world is secretly run by reptilian humanoids he calls the Babylonian Brotherhood. It’s way-out-there stuff, and Ellerbe, for his part, is incensed that ATP may be linked to TP Louisiana and its founder. “Basically, [Comeaux] got kicked off of Baton Rouge (Louisiana Tea Party) because he’s got his own agenda, and it is not reflective of the Tea Parties. He’s very divisive and he’s doing nothing but harm to the reputation and the message of the Tea Parties.” Efforts to contact Chris Comeaux were unsuccessful; TP Louisiana has no listed telephone number, and the group didn’t respond to an e-mail inquiry seeking one.

The Tea Party got brewing in Lafayette, as it did around the country, on the Internal Revenue Service’s April 15 tax-filing deadline, aka Tax Day. Initially, the movement operated under the acronym TEA (Taxed Enough Already) and was originally promoted and bankrolled to an extent by a trio of conservative free-market political action committees: FreedomWorks, dontGo and Americans for Prosperity. But the movement has since taken on a life of its own and lowered the case to emphasize that plucky colonial protest against British taxation in 1773. But even in April there were divinations of a split to be read in the tea leaves: At the April 15 rally at Parc Putnam downtown, residents with anti-tax paraphernalia were joined by a guy with a sign that read “Joey Durel is a fascist.” While more or less mainstream, the movement has from the start attracted those from the margins, and therein lies the problem for ATP.

Tea Party of Lafayette’s Linde downplays the kooky factor with the Tea Party of Louisiana. In a e-mail to the Independent issued in the wake of revelations about the Tea Party schism, Linde writes, “We are an independent group and our goals are to inform the citizens of the critical issues that are in the current political arena. In that way they can evaluate and act upon these issues as they choose.” Indeed, TP Lafayette has hosted two town hall meetings with a focus on the so-called “Cap and Trade” environmental bill as well as financial regulatory legislation. Linde did not, however, return a call seeking a clarification on whether she or the Tea Party of Lafayette endorse some of the more out-there ideas advanced in videos on the Tea Party of Louisiana’s Web site.