Lafayette native and his eco-lodge in Nova Scotia’s Acadian wilderness are angling for a global award. 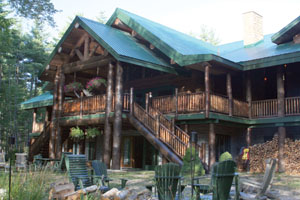 The Great Lodge at Trout Point Lodge, in the Tobeatic Wilderness, Nova Scotia

What did the Acadians eat when they lived in Nova Scotia? In the big woods, wild mushrooms carpeted the forest floor. Low bush blueberries exploded with tiny sweet fruit, steelhead trout leapt in tannin-stained streams and blue-eyed mussels were waiting to be plucked from the Atlantic beaches at low tide. By the time the Acadians became Cajuns in southwest Louisiana, trout had been replaced by river catfish and shrimp and oysters subbed for mussels. African cooks contributed much needed handfuls of spice. Put the raw ingredients of eastern Canada and south Louisiana side by side and what you’ve got is a simmering history of Acadian-Cajun-Creole cuisine.

The innovative concept offered at the back-to the-land lodge, located in the Southern Nova Scotia Biosphere Reserve, first caught the eye of magazines like Food and Wine and Martha Stewart Living. Now Trout Point has drawn the attention of Ashoka, an organization dedicated to social change. Sponsored by the National Geographic Society, Ashoka’s Geotourism Challenge 2009 is an international competition to identify the individuals and companies worldwide that have introduced the most innovative practices in tourism that sustain or enhance the geographical character of a place — its environment, culture, aesthetics, heritage and the well-being of its residents.

Trout Point Lodge is one of 10 finalists in a contest that garnered more than 600 entries world wide. The top 10 will be winnowed down to three winners, chosen in part by an online vote of the public. Anyone can pull the lever for our local boys at www.changemaker.net/geotourismchallenge until Aug. 12. The winners will be announced Wednesday, Sept. 9, and each will receive a cash prize of $5,000, but more important, world-wide recognition for their work promoting a sustainable sense of place.

Lafayette’s Abel has been auditioning for this contest his entire life. His grandfather was a farmer in north Mississippi. His grandmother owned the Egan Hotel in Crowley. His parents, Glynn and Leah Jane “Dukie” Abel, both worked at USL. Glynn Abel was dean of men for 30 years before becoming director of community affairs for the city of Lafayette. In between classes at Lafayette High, in the early 1960s, when Foreman Drive was the edge of town, Abel hunted and fished the bayous of Acadiana. He earned a BA in history and an MA in English literature at USL before getting his JD at Loyola in New Orleans and embarking on a career in the criminal justice system defending abused children.

This reads like a standard curriculum vitae until Abel starts talking about the switchbacks on the road less taken. Friends for decades, Abel, Perrett and Leary love to eat. They are also committed environmentalists who support organic farming and sustainable building. They believe in local food ways so strongly that they decided to establish a farm in Louisiana to raise the distinctive farm products, native livestock and homemade cheeses that were part of the state’s culinary heritage before the homogenization of American culture that began flooding into Louisiana following World War II. “We wanted to see what we could do that people, food-wise and agriculturally, did when they were more closely connected to the land,” says Abel. “We were all history students. It was fun to read about it. It’s just as much fun to try to do it.”

In the early 1990s, the trio established Chicory Farm in Mount Hermon, La. Perret and Leary quit their jobs to make and sell handmade goat and sheep’s milk cheeses, cultivated and wild mushrooms, baby lettuces and edible flowers to New Orleans restaurants and farmers markets. They got rave reviews. Abel kept his legal job, infusing funds into the project.

During a trip to Nova Scotia in 1996, Abel made the Acadian-Cajun connection. This sparked the idea of building a center that provided cooking lessons based on the raw ingredients that helped to create Louisiana’s distinctive cooking styles. Located at the confluence of the Tusket and Napier rivers, Trout Point Lodge, built in the tradition of the great camps of the 1920s, is both a luxurious resort, a cultural tourism destination, and a nature retreat emphasizing recycling, composting, and on-site gardening programs.

Kayaking, swimming and hiking are part of the program. So are foraging for your supper, then heading into the kitchens to learn how to marry cross-continental recipes like wild north woods mushrooms, plump Louisiana oysters and New Orleans’ beloved artichokes in a pasta sauce. “Through the cookbook [The Trout Point Lodge Cookbook] and the lodge, we’re promoting Acadian culture and Cajun and Creole cooking,” Able says. “It’s the framework for everything we do.”