Book chronicles the destruction of a La. coastal resort 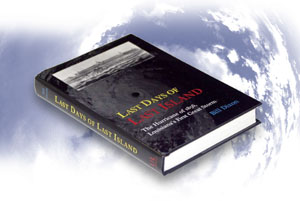 Long before meteorologists and satellites, before television and radio or the National Oceanic and Atmospheric Administration, there were hurricanes. They came and went with the same scatter-bang ferocity, capricious tempests hurled from the Gulf and the Atlantic. They didn’t get names until 1950, but they were no less deadly, no less pernicious. What the pre-20th century storms had going for them was an element of surprise.

A century before Category 3 Hurricane Betsy wrecked Grand Isle and swamped New Orleans, an even deadlier storm minced Isle Derniere, also known as Last Island — another of Louisiana’s barrier islands and a popular antebellum resort destination for south Louisiana’s planter class. More than 300 people on the island and in nearby ships perished in the unnamed Category 4 storm, according to a new account by Bill Dixon. Last Days of Last Island: The Hurricane of 1856, Louisiana’s First Great Storm (University of Louisiana at Lafayette Press) is an engrossing account of the tumult — the gathering clouds, the increasing wind, the sinking feeling, the crashing waves and rising water — and its aftermath. Among the survivors of the catastrophe was state House Speaker Col. William Whitmell Hill Pugh, who lost several family members.

Dixon was drawn to the story of Isle Deniere by a case of mistaken genealogy. “I was working on a family tree on my mother’s side — my mom was born in Gueydan and her mom was born on Bayou Lafourche,” he recalls, pronouncing the bayou like the locals — L’foosh, “I ran across a couple of references to the 1856 storm, and because my ancestors were from Assumption Parish, maybe there were some relatives on the island during the storm. As it turned out, that wasn’t the case.” But Dixon was hooked; the island reeled him in.

The hurricane of 1856 claimed 331 lives on land and at sea, according to Dixon’s tab. The tragedy became the basis for Lafcadio Hearns’ 1889 novella, Chita — part of the genesis for Dixon’s interest in the story — and was long the Gulf Coast’s benchmark by which other storms were judged.

Last Days is also a first of sorts: Although the University of Louisiana at Lafayette has been publishing books since the 1970s through the Center for Louisiana Studies, this is only the second title and first full-length book published with the UL imprint, according to Greg Mouton, marketing director for the UL Press. “A lot of university presses are going through some dire straits with all the budget cut-backs in higher education, a lot of people are feeling the effects,” Mouton says, “but we’re moving ahead and we’re showing some profits, which a lot of university presses out there right now are having a hard time doing.” ULL Press is set to embark on a second, strictly paperback printing of Last Days of Last Island. Mouton says the book is selling particularly well in Terrebonne and Lafourche parishes where many residents are descendants of Derniere survivors and victims. “To me it’s an honor,” Dixon says of the research and writing. “One of the things that I’m going to tell people at every place I stop is that, my name may be on the book ... but this is really y’all’s story, and I just hope I did justice to it.”

Bill Dixon will attend book-signing events locally from 6-7:30 p.m. Thursday, July 30, at Shadows on the Teche in New Iberia and from 2-3:30 p.m. Sunday, Aug. 2, at Barnes & Noble in Lafayette. Last Days of Last Island retails for $30 hardcover ($20 soft cover) and is available at major book sellers.