More questions than answers — including a rumored party switch by Scott Angelle — about the 2010 election cycle. 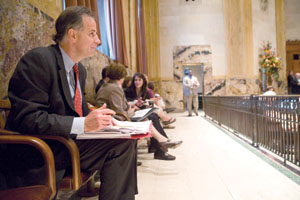 It’s go time. The summer is slowly fading away, children are about to return to school, festival season is ratcheting up and the fall will bring with it heavy political decisions. That’s because 2010 is a major election year.

For starters, U.S. Sen. David Vitter is facing re-election, and voters will be charged with forgiving or damning him for doing something or another with the D.C. Madam and her former stock of working girls. All we know for sure is that Vitter’s cell number appeared at least five times in the phone records of the late Deborah Jeane Palfrey, who killed herself after her federal conviction, and the junior senator admitted to a “very serious sin.”

That’s the great mystery of the 2010 election season: Will Vitter admit more than he already has about the prostitution scandal? Can he survive the negative attacks and redundant questions to come? But Vitter’s isn’t the only mystery.

Next year’s cycle will see congressional elections as well, many of which are just as much in play as the coming Senate election. Here’s a peek at some of the other Louisiana political mysteries:

• Has Scott Angelle been Jindalized? As natural resources secretary under former Gov. Kathleen Blanco, a Democrat, and sitting Gov. Bobby Jindal, a Republican, Angelle has been a rising star for his aggressive approach, cool demeanor and obvious political skill. After Angelle, a native of Breaux Bridge, was asked to serve as Jindal’s legislative liaison earlier this year — even though he’s a Democrat — the rave reviews from lawmakers poured in.

That led business interests in Acadiana to woo Angelle to run for Congress in the Third Congressional District. Incumbent Charlie Melancon, D-Napoleonville, is expected to vacate that seat to challenge Vitter. At first, Angelle seemed cool to the idea, but now he sounds like a real pol, albeit one on the fence. “In due time I’ll give it the appropriate consideration,” he says. “I’ve received a lot of encouragement, and I’m flattered to be on any short list. And I think as secretary and after working with Gov. Jindal I’ve demonstrated my dedication to public service. I also believe this experience qualifies me to be considered.”

The plot thickens with rumors that Angelle, the former St. Martin parish president, may not run as a Democrat. When asked if he had been approached by the Louisiana GOP about switching teams, Angelle said no. In a follow-up interview by email, he was also asked if he would even consider making the leap. “Several longtime friends have suggested it over the years and again more recently, “Angelle replied. “It is something that I would consider like Ronald Reagan, Mike Foster and Billy Tauzin.”

• What is Charlie Melancon waiting for? The only thing keeping Melancon from announcing his candidacy as the Democratic standard bearer in next year’s U.S. Senate race is Shaw CEO Jim Bernhard. The industrialist also is eyeing the race, but still isn’t granting press interviews. Bernhard’s main asset is money, which also is the main reason Dems are scrambling to keep him out of the race.

Sources close to the party contend there’s a great deal of ego-stroking going on right now, and it isn’t clear what Bernhard wants, if anything, apart from attention. “I’ve never seen anything like it,” says one source.

So, the real question at this date seems to be, “How do you turn up the heat on the 800-pound gorilla?” It may take heavy hitters getting involved, sources say, meaning elected officials on the federal level, although it seems that Bernhard’s pocketbook could continue to earn him all the attention he wants.

• Will the health care debate save the docs? U.S. Reps. Bill Cassidy, R-Baton Rouge, and John Fleming, R-Minden, have been added to the National Republican Congressional Campaign Committee’s “Patriot Program,” which means the two M.D.s are considered vulnerable next year by their own party.

Cassidy, for one, may have better ground to stand on. He has nearly $600,000 in the bank and could emerge as the best fundraiser in his freshman class. Both physicians are well positioned to contribute to the national health care debate, and both have benefited from national media exposure, along with Louisiana’s third doctor-lawmaker, Rep. Charles Boustany, R-Lafayette.

The NRCC’s program works by providing targeted lawmakers with financial assistance — if they’re able to meet pre-determined fundraising levels. Rep. Joseph Cao, R-New Orleans, is on the list as well, but isn’t enjoying a physician’s bump.

Last week, Welsh’s car was blown up, literally (think: Martin Scorsese’s Casino). If you know Welsh, then you know a quick joke is never far from his lips, but this is serious business. His car was parked near his New Orleans apartment and two nearby vehicles were damaged in the process. While he’s been careful in what he says, Welsh contends it’s politically related. To be certain, it’s at least deadly ridiculous.

In other news, Daniels was arrested last week in Florida. The police report states that Stephanie Clifford (Stormy is not her real name — go figure) was arrested for domestic violence after allegedly hitting her husband “on his head” because she did not like “the way the laundry had been done.” Maybe that’s why she’s called Stormy.

While it spells bad news for the Daniels campaign, her actions may open up an entirely new demographic for her: angry wives. We won’t know the real aftereffects for another few months, if Daniels even runs. Until then, her status remains another Louisiana political mystery.