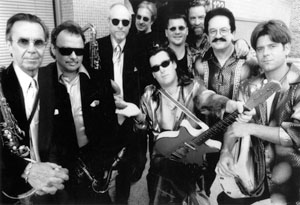 The tagline reads “8 Members,  25 Egos, and 6 Livers.” Something seems to be missing, but it ain’t the soul. Fresh from the Cannes & Tribeca film festivals, Lafayette’s own swamp pop super group Lil’ Band O Gold hits the Manship Theater in Baton Rouge for a special double feature. First, there will be a screening of one of the greatest Louisiana films made in recent times, The Promised Land: A Swamp Pop Journey. If you haven’t seen it yet, the film dotingly explores the history of Lil’ Band O Gold and specifically the weighty cultural contributions of swamp pop. Directed by Matthew Wilkinson and produced by C.C. Adcock and the late Tarka Cordell, the movie plays like a love letter to swamp pop music and the dedicated musicians who have made it, but possibly never got their just due. Good stuff. “The Manship Theatre is the best thing to come out of Baton Rouge since Slim Harpo and Pinetta’s,” says band member Adcock. After the screening, Lil’ Band O Gold will immediately take the stage and play full set, so it’ll be like seeing the movie again in 3D. “Watching The Promised Land with all the Band O Gold cats sitting around you and your date is truly swamp pop 3D – especially when Warren Storm starts to sin,” says Adcock, “as well as when Steve and I laugh at our own jokes and various haircuts.” Invite the whole Lafayette crew to make the short jump across the basin bridge to Baton Rouge where you can beat the heat, take in a movie, and dance at a live concert. And while you’re at it, you can peep out Leah Simon’s Tsunami upstairs, while eating sushi and meditatively gazing out at the mighty Mississippi River. That’s got to beat watching some dude urinate in the parking tower stairwell on a Friday night downtown. Be there Aug. 7 at the Manship Theater in Baton Rouge to bear witness with Warren Storm, Dickie Landry, C.C. Adcock, David Egan, Steve Riley, Richard Comeaux and the rest of the crew.