Buy a pair of TOMS and this compassionate company will donate a pair to a needy child. 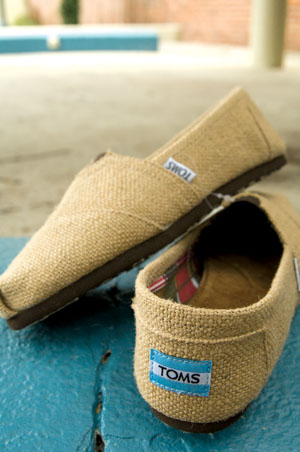 On a trip to Argentina in 2006, former “Amazing Race” contestant and world traveler Blake Mycoskie met and befriended some of the poor, local children. He was saddened by the fact that these children had no shoes to protect their feet, realizing that the cuts and open sores incurred from unsafe roads in underdeveloped countries can often lead to serious infections and even amputations. Since walking is the main form of transportation in these areas, a pair of shoes can greatly reduce these risks. Seeing these little children deprived of what we so easily take for granted, Mycoskie was inspired to form a shoe company based on the idea that for every pair that he sold, he would also give a new pair to a needy child. And thus, TOMS shoes were born, as was its motto, “One for One.”

TOMS is short for the original concept, “Shoes for Tomorrow Project.” The design of the shoes is based on the alpargata, which is a version of the espadrille worn in Argentina. They come in hundreds of colors, patterns and fabrics; and while many of the styles are vegan, the basic design remains the same. Celebrities are being spotted left and right with these adorable slip-ons, including Scarlett Johansson, Keira Knightly and Kristen Stewart. Dave Matthews has even designed two pairs of TOMS that can be purchased on his band’s Web site or at any stop on his summer tour until October.

Due to all of the attention TOMS has been getting, the company has already managed to give 140,000 pairs of shoes to needy children and is planning to double that number by this year’s end. Some of those even went to our own Louisiana kids affected by Hurricane Katrina, as Mycoskie hosted Do-It-Yourself parties where the youngsters got to decorate their very own pair of white TOMS with whatever they liked.

TOMS has now expanded to include a type of boot, as well as apparel, but the concept remains the same: Even if you buy a T-shirt, a pair of shoes still goes to a child.

TOMS are available at River Ranch’s Shoe-La-La for $50-$62 in eight colors and patterns, with fall colors arriving in the next month. “They’re very hard to get; they’re backed up,” says Shoe-La-La owner Amy Lewis. They’re flying off stores’ shelves, Lewis says, in part because the closed-toe style and availability of light colors make them acceptable with many schools’ uniforms — but mostly because this shoe has such a great soul.