Legislative chamber bosses are taking routes not traveled by the governor, but they’re still on different paths. 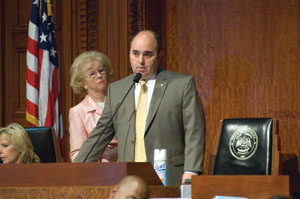 In May 2008, Louisiana’s new Republican Gov. Bobby Jindal stood in front of the National Press Club in Washington, D.C., where America’s biggest newsmaker of the week is customarily invited to pitch his cause — or himself. On this occasion, Jindal made sure that Louisiana’s House speaker, a fellow Republican, and Senate president, a Democrat, were seated nearby. Longtime political observers say Jindal used Rep. Jim Tucker and Sen. Joel Chaisson as props to show the national press he could bridge the political chasm between parties in his own state.

In an interview last week, Chaisson laughed off that interpretation and offered his own version of history — and a glimpse into what life is like atop the legislative ladder these days. “That was more about promoting Louisiana than it was about any personal agenda,” he says, recalling Jindal’s brief but illustrious flirtation with the GOP’s veep spot. “The politics then were different than they are now. Whether I would go now if invited is something else. Probably not.”

That statement speaks volumes about how much things have changed since then.

Tucker says he didn’t feel like a pawn either at the 2008 press club event, and adds he would likely attend another national media opportunity with Jindal if invited. “Those issues, the strides in ethics that we made and talked about, are worth promoting on any level,” Tucker says.

Still, recent history suggests that Tucker and Chaisson, who won their leadership positions with at least the blessing of the newly elected governor, have gone AWOL from Camp Jindal. Relations between the governor and lawmakers, including the leadership, started to unravel within two months of the D.C. presentation, when Jindal vetoed lawmakers’ controversial pay raise — after initially promising that he would not do so, particularly if they passed his school voucher bill.

Jindal reneged in the face of public pressure and left lawmakers twisting in the wind — and scorched by ridicule from reporters, bloggers and citizens. Jindal scored points, belatedly, with voters, but that veto changed the game. “I expended a great deal of political capital on that because I thought it was the right thing to do for the future of this body, not because I needed the money,” Tucker recalls. “And it may very well keep me from doing something else in politics in the future, but I stood my ground.” (Base legislative pay is $16,800 for what has become a near-full-time job.)

With the right kind of eyes, as the late Hunter S. Thompson once noted, you could just about see the high-water mark at that point — the exact place and time where the wave broke and then rolled back. In response, some predicted a full-scale legislative revolt this year during the recently completed legislative session. That didn’t happen, but the pay raise veto was a constant undertow, and it foreshadowed the independent streaks that Chaisson and Tucker have shown this year.

Ironically, while Tucker and Chaisson distanced themselves from Jindal this year and challenged him on several fronts, they chose very different issues on which to stake their independence. Sometimes, they worked at cross-purposes, such as their open feud over the state budget. Chaisson made that his gauntlet, but it was Tucker, not Jindal, who picked it up and championed the governor’s cause. Conversely, Tucker broke ranks with the administration on Jindal’s controversial (and, many say, Orwellian) “transparency” bill, offering an amendment that the governor’s allies only narrowly defeated. The same bill sailed through the Senate, with Chaisson voting against every amendment opposed by Jindal.

In another twist, Jindal line-item vetoed $500,000 worth of economic development funds in Tucker’s district, even though the speaker toed the administration line on the budget. Many suspect the veto was retribution for Tucker’s attempt to amend Jindal’s transparency measure.

Chaisson, for his part, showed an early independent bent by not waiting for the governor’s traditional endorsement for Senate president. He locked up 15 of the 20 votes he needed on his own, then paired them with another six corralled by Lafayette Sen. Mike Michot, a Republican who got the Senate Finance Committee gavel in return. Together, they took over the Senate before Jindal’s feet were wet.

Perhaps not wanting to look politically impotent, Jindal generated a great deal of media attention by calling a press conference to recognize Chaisson’s frontrunner status before the Senate election — even though Jindal had promised voters he would stay clear of the leadership selection process. Jindal’s move was just a lot of noise, Chaisson says today, as the deal was done by the time Jindal got involved. “That’s accurate,” he says, again chuckling, “but with just one caveat: the governor probably would have chosen someone else if he had the chance.”

Despite his tough rhetoric these days — and his opposing party affiliation — Chaisson in many ways is more aligned with the Jindal administration than is Republican Tucker. The speaker pushed himself to the brink in opposing Jindal’s “transparency” bill. He lost that round, but good government groups agreed that the bill (now Act 495 of the 2009 session) gave citizens precious little “sunshine.” Noting that Chaisson stood with the administration on that one, Michot says, “I think we’ve seen more independence from Speaker Tucker during these past two years than we have from the [Senate] president.”

Tucker, who likewise orchestrated his leadership election sans Jindal, says some of his flights of independent fancy are the result of the process of herding cats — shepherding 105 House members as opposed to only 39 senators. He says his biggest challenge is trying to serve them all, which involves making decisions that may not be in synch with his fellow Republicans (Tucker previously chaired the GOP Caucus) or the administration. “I try to govern from the middle, but that’s easier said than done,” he admits. “When you have that many people, there are going to be differences, but I’m going to continue striving for that balance.”

A complex political formula keeps Tucker and Chaisson on their respective precipices — and potentially threatens each. Democrats hold a majority in each chamber, but the balance is almost even in the House. Senate Democrats want Chaisson to lead the anti-Jindal charge, whereas House Republicans are pushing Tucker to move right from center. Those countervailing forces may again pit the two men against each other.

Nonetheless, if there were ever a time for two mavericks to offer a new vision for the state, it’s now. In that vein, there is hope that Tucker and Chaisson will have cause to continue their independent ways, whatever the consequences. Time is short; both men are term-limited and must leave their respective seats in 2012. “I think there’s an urgency in what we’re trying to do because of that,” says Tucker. “I don’t have 25 years to build a career in the House. I only have two years left, like Joel, and I feel like we’re up at bat. And let me tell you, while I’m at bat, I’m going to swing.”