Lafayette native is living the dream in Los Angeles, and Honolulu, and Vancouver, and Seattle, and London, and Amsterdam, and ... 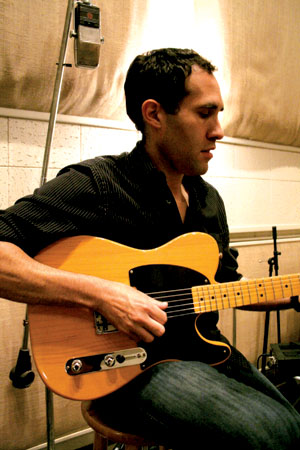 Scott Eric Olivier, Lafayette High class of ’90, left the Hub City for the regional music Mecca of Austin in April 1994 with an alternative rock band called One Hand Clapping. The quartet — he was the drummer — had designs on stardom, or some reasonable facsimile thereof. The band fizzled, but Olivier has sizzled.

Now a hot commodity in that hottest of all music markets — Los Angeles — he lists some 87 groups and artists with whom he has either performed (on drums, guitar and keyboards mainly), produced, engineered, or contributed his considerable technical expertise, among them The Goo Goo Dolls, The Offspring, Nikki Sixx and Van Halen. He also owns an LA music studio and is widely sought after for his mobile sound-scaping. But atop the list of collaborators and clients — literally because it is most recent and figuratively as well — is late King of Pop Michael Jackson.

Olivier attended the rehearsals last spring for the 50 London concerts Jackson was set to embark on, including the final rehearsal, of which video footage of a wan but seemingly well Jackson has been aired on TV news and entertainment programs. Olivier had signed a two-year contract with Jackson to do sound programming for the bass and drums and, he says, had verbally agreed to sign on for an additional two years at Jackson’s request. “I spent 15, 18 hours a day for 46 days just re-creating every drum sound, every bass guitar sound and every synthesizer sound in his catalogue.”

“He was so gracious and so nice,” Olivier recalls. “He never really said much, but ‘thank you,’ and ‘hello’ and ‘goodbye.’ If there was something that needed to be attended to, he was very gentle in the way that he would say it to people; like if someone quite obviously made a mistake he would almost always blame it on himself ... He was really excellent at making everyone feel great about what they were doing.”

The London concerts were huge money that evaporated the moment Jackson’s death was announced. “I was three feet from him nine hours before he was gone,” Olivier says via phone from Hawaii where he’s doing technical work during a string of concerts for the band that will supplant Jackson as most recent on his unquestionably super-awesome list: No Doubt (golden girl Gwen Stefani’s band).

Olivier isn’t sure what’s next once he gets back to LA, but the phone will ring, a gig will call, he’ll hit the road — Olivier reckons he spends up to 225 days a year on the road. And while he left Lafayette 15 years ago, it’s not accurate to say he never looked back; his mother still lives in the same house near Lafayette High. “It’s been good,” he admits. “I’m still pretty much the same person. I love to work. I don’t feel any different — I feel fortunate as hell.”