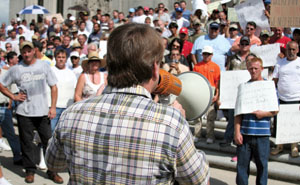 U.S. Rep. Charlie Melancon told commercial fishermen during last week’s protest on the steps of the State Capitol that he would call for a congressional investigation into alleged price-fixing.

If you live in south Louisiana, then you’re probably well aware that commercial shrimpers have had a tough go at making a living in recent years. Foreign imports have undercut the domestic market and forced many trawlers out of business. But what you might not know is that shrimpers, by nature, don’t always get along with each other, which has been more of a detriment to the industry than anything else at times. Each region seems to have its own coalition, pitting east coast shrimpers against those along the central and western shorelines. The divides are even more noticeable among the races — Cajun-American, African-American and every other hyphenated culture that resides in the marshes and along our bayous.

Last week, however, the traditional chasms were bridged, at least momentarily, when more than 500 shrimpers gathered on the steps of the State Capitol to protest what has to be the most substantial price drop in recent history. It was a heartening sight — the crowd, which turned up in Baton Rouge with only two days’ notice, ran the spectrum from elderly fishermen who have long since left the trade to college-aged young adults poised to inherit their piece of the sea-bound practice, problems and all. At one point during the protest, the crowd erupted in clapping, shouting and pointing as a busload of Vietnamese-American shrimpers walked through the Capitol’s gardens to the front steps, past the grave of former Gov. Huey P. Long and into the parking lot.

Earl Ronquillo, whose shrimping operation is based in Buras, says economics have brought the factions together. The same $4-per-pound 10-count shrimp consumers buy from their local markets are netting him only 45 to 75 cents, and that’s down from about $2.50 last year. Add in the cost of fuel, nets, ice and deckhands, not to mention federal recovery money from hurricanes past tied up in federal bureaucracy, and it’s a dismal state of affairs. “We tied up our boats and got everyone together — the Vietnamese shrimpers, black, white, everyone — and decided to strike,” he said. “We’re not making money anymore.”

Charlie Smith, a Baton Rouge lobbyist who represents commercial fishing interests, says shrimpers, specifically, want state officials to investigate whether there’s price fixing going on, which would indicate a conspiracy of sorts between seafood brokers and others to bring prices down. Smith also said that the strike many fishermen promised during the rally could be the real deal, with shrimpers making “no dockside sales to buyers unless and until they get a price that includes a modest profit.”

Even if a massive strike does occur, cynics doubt what impact would be made — in excess of 90 percent of all the shrimp eaten in the U.S. comes from an imported source. And although Louisiana leads the nation in domestic production of shrimp, with fishers hauling in 57.8 million pounds last year, it amounts to less than 5 percent of the shrimp consumed in the United States. As such, when many of the shrimpers in attendance were asked directly if they were willing to strike, the reactions were mixed. “I just can’t do it,” says Rickey Robin, a shrimper from St. Bernard Parish. “I got to feed my kids. We’re already starving now.”

Nonetheless, those not willing to strike did show up. Yet it doesn’t mean the entire industry is finally on the same page. Processors and brokers, who would be valuable additions to the fight shrimpers are waging, are being blamed for the low prices. In a phone interview after the protest, David Chauvin, whose Mariah Jade Shrimp Company processes shrimp out of Terrebonne Parish, says the industry’s time would be better spent pushing new laws, like one that would require restaurants to disclose where their shrimp come from. Domestic crawfish producers were successful in getting such a law passed in Louisiana earlier this year for mudbugs. “The people we sell and market our shrimp to are having their own problems selling shrimp,” Chauvin says. “We wouldn’t have these problems if there was a law like that nationwide.”

He adds that some form of price-fixing is going on amongst buyers, but it’s not any sort of conspiracy — rather, it’s just a common business practice. “Processors and competitors keep an eye on where prices are and they’re going to adjust accordingly,” Chauvin says. “And if processors are making so much money off of this, why are we losing two or three each year?”

Elected officials were at last week’s rally as well. Sweating in the midday heat and with a megaphone pulled near his mouth, U.S. Rep. Charlie Melancon, D-Napoleonville, told those gathered that he would personally see that the hearings happen as soon as Congress returns from its summer recess. “We’re going to find out who’s making money off your shrimp,” says.

Noticeably absent from the rally was Gov. Bobby Jindal, which wasn’t missed on the group of Vietnamese-American shrimpers that arrived late, many of them waving signs reading, “Where U At Bobby?” On that day, and actually at that very moment, Jindal was flying to Winnfield for a previously scheduled event. State Rep. Ernest Wooten, R-Belle Chasse, played up the absence. “(The governor) is running around the state talking about professional football teams and chicken plants and all the money we gave them, and that’s great, but we can’t turn our back on an industry that has been here for generations,” Wooten says.

Jindal, though, did get involved, although it came more than 24 hours after the promise made by Melancon. Last Wednesday afternoon, Jindal fired off a letter to the Commerce Department and International Trade Commission “requesting an investigation of possible violations of trade practices by foreign countries adversely affecting Louisiana’s shrimping industry.” In his letter, Jindal suggests an immediate investigation could go a long way in solving some of the challenges commercial trawlers face. “While continuing to recover from the effects of the devastating 2005 and 2008 hurricane seasons, Louisiana shrimp fishermen have never had greater need for protection from unfair trade practices that threaten their livelihood,” the governor writes.

For many of Louisiana’s shrimpers, it’s all a lot of hot air. They’ve lost confidence in the federal government. One protestor waved a sign proclaiming “Obama, Fishermen Need A Bailout Too,” while another held up a poster that kept the message simple with “Help us Obama!”  Ronnie Anderson of Montegut stood in the middle of the pack wearing a Delcambre Shrimp Festival t-shirt and a “Wild-Caught Louisiana Shrimp” hat, and holding his own sign asking the reader to “Buy American.” He says he lost faith in the federal government, which has stopped imposing tariffs on imported product, when his 16/20-count tails started selling for $2.30. “I just can’t take it anymore,” Anderson says. “When I sold shrimp as a kid I got more money than that.”

If the feds are of little help and the industry is unwilling to truly stand behind one banner, the struggles of Louisiana’s iconic shrimpers may continue for longer than anyone wants. Any solution will have to address the influx of foreign product, the relationship between shrimpers and buyers, and must involve some kind of government-funded assistance. It’s a tall order to fill, but doing nothing would mean losing a part of Louisiana’s character. State Rep. Truck Gisclair, D-Larose, says he hopes new ideas surface from the struggles, ideas that could be addressed during next year’s regular session — on the state level. It’s a decent tact, for starters. After all, if we’re not willing to take care of our own, what does that say about us, as a proud people who have come to partly identify ourselves by the Bayou State’s ample natural resources. “These fishermen are not looking for a handout,” says Gisclair. “All they want is a level playing field.”