My friend Shirley is among the fastest-growing demo in America (though in my book he’s one in a million) — and a perfect example of why it’s important to invest for the long-term. 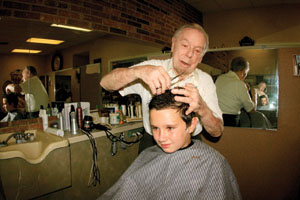 This morning I had my hair cut by my barber and friend, Shirley Savoy. Shirley became my dad’s barber in 1950. He also gave me my first professional haircut in that same year. He gave my brother, John, his first haircut a couple of years later.

Shirley has been a part of our lives for 59 years. He typifies our Cajun tradition — he is a perfectionist. For Shirley, cutting hair is not a trade; it’s an art form. He has lived in Lafayette continuously since his honorable discharge from the Navy at the end of WWII. He was married to the same beautiful woman, Loraine, for 64 years until her passing last year.

At age 90, Shirley’s hand is still steady, and his mind remains sharp. I can’t imagine ever letting anyone else cut my few remaining locks. Even though his formal education was very brief, Shirley is a writer, an actor and great conversationalist. The best of Acadiana.

Shirley is part of one of the fastest growing demographic groups in America: healthy and active people over age 90. He still has zest and enjoys his active life. Many of us hope to have long, active lives like my dear friend. However, to do so we must not only take care of our health. We must also carefully manage our financial lives, so that we can remain financially independent for as long as we live. To do this, we must save, and invest our savings to offer protection from inflation.

When Shirley began his career, he charged 15 cents for the same haircut that costs $12 today. He still lives in the same home on Lewis Street that he purchased for $13,000 in 1954. His first new car, an Oldsmobile, cost about $1,200. Shirley and Loraine drove their new Oldsmobile to watch movies at the Jefferson Theater in downtown Lafayette. They purchased their gasoline from a full-service station for just 20 cents a gallon. They purchased movie tickets for 25 cents, and enjoyed Coke and popcorn for a nickel apiece.

When Shirley was a young man, very few people gave inflation much thought. The financial markets were much less sophisticated than they are today, and the average life expectancy of Americans was much shorter. The financial planning profession was just beginning to evolve, so there were very few trained financial professionals that the average American could turn to for advice.

Shirley has been very fortunate. He has always lived within his means, and he has remained in excellent health. But, how many of us can expect to remain actively employed past age 90? Most of us will have to rely on our investments to supplement the income we hope to receive from Social Security when we retire.

It is easy to find excuses not to invest during times of financial crisis and market volatility. However, while short-term market movements are unpredictable, inflation is a certainty. The certainty of future inflation makes it necessary for each of us to implement a long-term, systematic savings plan that will help to protect us from the increase in the cost of goods and services as we age.

For a hypothetical example of long-term investment performance, let’s go all the way back to Jan. 1, 1949, when Shirley was approaching age 30. Had Shirley made a onetime investment of $2,000 in one of the solid investment funds available at that time (due to compliance restraints, I won’t mention the name of the fund but did include the accompanying chart of its historical performance), his original investment could have potentially grown to $124,419 by his 64th birthday. Beginning at age 65, if Shirley had withdrawn 4 percent annually from his account, to supplement his income from Social Security, his annual withdrawals could have potentially grown from $4,895 at age 65 to $33,952 at age 89. Like many other investment funds, Shirley’s account could have lost substantial value last year. However, even after 2008 losses and 25 years of withdrawals, Shirley’s account could have — potentially — been worth $575,757 at the end of June 2009. Not a bad return on $2,000!

If you have an interest in setting up a long-term investment plan, there are many places you can go for professional advice. This may be a good time to ask one of Acadiana’s many qualified financial advisers for assistance in building a secure financial future for you and your family. The future is much closer than you think.

Dave Romagosa, president of Cornerstone Financial Group, has been a financial adviser in Lafayette since 1969. He has a master’s degree in financial services and holds the Certified Financial Planner designation. He is a member of the adjunct faculty at UL Lafayette, where he teaches a course in finance.