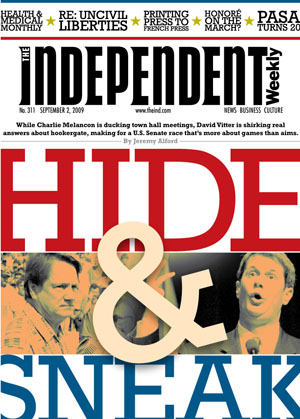 Charlie Melancon may be the first major political candidate from Louisiana to announce a bid for office from his dining room table. That all of his supporters, the state’s media and other political onlookers were able to fit into his charming Napoleonville home was even more remarkable. But that, as they say, is the magic of the Internet.

Last week, Melancon told the world via e-mail that he would challenge U.S. Sen. David Vitter. His message also provided a link to a YouTube video posted on his campaign’s site.

Click. (Cue piano) “Hello. My name is Charlie Melancon. I’m a businessman who’s been an ambassador for our state’s sugar industry, and I’ve owned and run several successful businesses. I’m a proud family man, the father of two great children, and Peachy and I celebrated our 37th wedding anniversary just last week.”

Peachy didn’t enter the frame with a tray of fried catfish or Natchitoches meat pies, but it would have been a nice touch. The video, however, does play into the image of Melancon that his GOP opposition has floated recently: that of a detached U.S. congressman who’s avoiding town hall meetings.

Meanwhile Vitter, a Republican from Metairie whom Melancon will face next fall, is in the trenches and holding one public meeting after another — sort of. He has certainly conducted more than a dozen face-to-face gatherings around the state, but he has carefully choreographed them by having his staff pre-screen questions from the audience — no doubt to avoid or at least minimize potential questions about his connection to a Beltway-based prostitution ring that was run by a madam who killed herself last year.

When questions about the sex scandal arise, Vitter obliquely says he has admitted his transgressions and apologized for them — and obtained forgiveness from his wife. Critics say he has never fully ’fessed up to the nature of his “serious sin.”

Melancon’s entry into the hornet’s nest reverberates on several levels. For starters, it shakes up the field and presents new questions about others who were planning on opposing Vitter. Melancon is also leaving open the 3rd Congressional District, which contains eastern Acadiana, and several suitors have already lined up to succeed him.

Moreover, the Louisiana Democratic Party and its leadership, often criticized for being unorganized, is at a pivotal point with this race. Rumors about a shake-up are growing stronger, and the opening salvo of the Melancon-Vitter contest could determine who’s in control come 2010. For now, though, the race is only just beginning to creak to a start, although at a very contentious pitch. 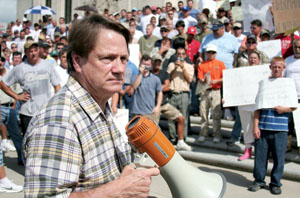 While dodging contentious town hall meetings, U.S. Rep. Charlie Melancon has nonetheless been visible in his district, as well as at the state Capitol for a recent protest by shrimpers.

Here and elsewhere, Congress is winding down its most volatile recess in memory, thanks to President Barack Obama’s controversial health care reform plans. Melancon held regular town hall meetings in the past but offered only telephone town hall meetings this summer. Voters had to dial in to participate.

Melancon has every reason to be weary of town hall meetings. Earlier this year, The Daily Iberian wrote of one contentious gathering: “U.S. Rep. Charlie Melancon ‘took a beating’ from a crowd of fiery residents Thursday night as he defended his recent voting record on several bills in Congress including the economic stimulus package, corporate bailouts and the federal budget.”

Here’s another account, just last week, from The Courier out of Houma: “More than 200 people protested proposals for national health-care reform [in front of Melancon’s district office and] there were chants of ‘We want Charlie,’ ‘Chicken Charlie’ and ‘Where is Charlie?’” Robin Winchell, Melancon’s D.C. spokesperson, says the congressman was never informed of or invited to the event.

Winchell also issued a prepared statement from Melancon, prior to the Houma event, about his lack of town hall meetings: “This August, I have been driving around south Louisiana, attending dozens of public events and meeting people where they are — at festivals, Rotary Club meetings, schools, and community centers — and listening to what they have to say.”

Information obtained from Melancon’s scheduler confirms such events, practically on a daily basis during the entire recess.

Nonetheless, Melancon’s opponents are already beating the drum and calling him an absent candidate, charges that dogged even Gov. Bobby Jindal during his 2007 gubernatorial campaign. If town hall meetings matter, they appear to be boosting Vitter’s image, energizing his base and contrasting him to Melancon.

Louisiana voters, particularly Democrats, needed to see Melancon announce in public, on a sunny August day with as many bodies around him as possible. He’s not the incumbent in this race, and he shouldn’t act like one, says Joshua Stockley, a political-science professor at the University of Louisiana at Monroe who has extensive knowledge of the district.

On the other hand, Stockley says Melancon’s decision to announce via the Web (“it’s cheap and accessible”) and strategy of steering clear of town hall meetings shows the campaign’s skill at “crafting an image and controlling the setting,” even if it could potentially backfire.

“Charlie Melancon has been very visible in the district recently without holding town hall meetings, which is perhaps a good strategy,” Stockley says. “A lot of the town hall meetings being held right now are very animated and anti-health care, and while Melancon hasn’t endorsed Obama’s plan, there’s a risk that the cameras would roll on the anti-health care sentiment and the viewers would interpret that as anti-Melancon sentiment.” 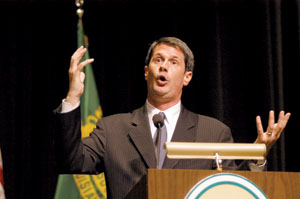 Melancon’s entry into the race, while long expected, is rippling across Louisiana’s political pond. For one, it means Shaw CEO Jim Bernhard, a Democrat, has been coaxed out of the race for good. Sources close to the process report that a great deal of ego-stroking went on, and it was carried out on Melancon’s behalf by a few high-ranking elected officials.

Secretary of State Jay Dardenne is rumored to be looking at the race and his camp has remained silent — a tact that should guarantee Dardenne weeks or months of speculative ink and TV time, should he want to draw it out.

The GOP side of the ticket is shaky at best, and it appears less likely each week that Vitter will be alone in the Republican primary. Aside from Dardenne, a number of New Orleans-area publications are reporting that Gen. Russel Honore, a Zachary native, is testing the waters.

As for the 3rd Congressional District, Melancon will serve out the remainder of his term. Potential successors, though, have been lining up for months. State Rep. Nickie Monica, a LaPlace Republican, is already campaigning and is the only declared candidate.

Out of Acadiana, Natural Resources Secretary Scott Angelle is seriously considering his chances and is open to running under the GOP banner. He’s a Democrat now but most recently served as legislative liaison under Jindal and has many, many new friends.

Democrats will surely want to hold on to that seat and help Melancon in his newfound venture, especially the state party’s leadership. Melancon is the lone Democrat in Louisiana’s House delegation, while Sen. Mary Landrieu of New Orleans is the only Bayou State Dem in the Upper Chamber.

Congressional races in recent years have been particularly painful for Louisiana Democrats, and many candidates have lost confidence with the party because they were ignored or not given money. Others, like state Rep. Michael Jackson of Baton Rouge, have even dropped their party affiliations to make their points of view heard.

On top of these troubles, turnover at the Louisiana Democratic Party has been dismal. The party has gone through two executive directors in as many years. Britton Loftin, who resigned earlier this year, leaves behind a sexual harassment suit that was brought about by another former staffer. Two communications directors, including former Independent Weekly Editor Scott Jordan, hitched onto other wagons during the same time frame as well.

Just last month, Executive Director Chris Whittington’s opponents circulated a survey — dubbed as “bogus” by Whittington — to members of the Democratic State Central Committee, which elects the chair, asking whether new leadership was needed. The uprising was orchestrated by a small faction of party loyalists like Lafayette’s Mike Stagg.

Whittington was elected to a four-year term last year, despite opposition from Melancon, Landrieu and her brother, Lt. Gov. Mitch Landrieu, who together backed Vacherie attorney Paul Aucoin instead. The election was forced into a runoff, with Whittington coming out on top by a vote of 100-64.

But now resentment is growing again, and one source close to the party predicts that Whittington won’t be able to hold on much longer. “There is a change coming,” the source says. “That’s for sure.”


Vitter has been drawing blood at his own meetings for weeks, and Melancon’s Web announcement last week sounded like more silence, which can be deadly in a statewide race. Hearken back to Jindal, who could have been well into his second term by now if he had hit back against volleys from then-candidate Kathleen Blanco during the 2003 election.

As soon as Melancon let loose his video, Vitter fired back with what will be the standard line, linking the congressman to liberal D.C. figureheads. “After Charlie endorsed President Obama in the election and voted with him 84 percent of the time, this is no surprise,” says Vitter. “We now know that the Obama money machine will be filling our opponent’s campaign coffers with liberal contributions.”

If Melancon’s low profile represents a strategy, it’s probably a short-term approach. Sources close to both campaigns suggest the mud could start flying later this month, when lawmakers reconvene in Washington. To be fair, Vitter has had his own public meeting problems. Last week he was asked not to address a Metairie Tea Party event that he had partly billed as his own.

No doubt that’s small potatoes compared to what Democrats have in store for Vitter — like his long absence and missed votes in the wake of hookergate in 2007. The subtext in Melancon’s announcement further made it clear that he’ll hit Vitter where it hurts. After all, a “family man,” as Melancon calls himself in the video press release, would never do some of the things Vitter has (sort of) admitted. “Louisiana needs a different approach,” Melancon says in the video. “More bi-partisan. More disciplined. More honest and with a whole lot more common sense.”

Get used to hearing that message. It will mark the end of Melancon’s low profile — and the beginning of a long, hard fight for Vitter’s seat.