The historic Tribune Printing Plant reemerges as a mecca for dining, wine and wheels 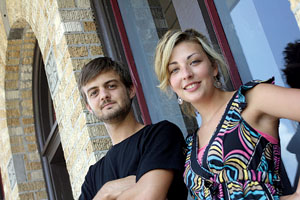 Justin and Margaret Girouard are dreaming up a new restaurant, The French Press, to open in the Tribune building in December.

Over a year ago, the antique printing presses at the Tribune Printing Plant on Vermilion Street finally gave up the ghost. The business left behind vestiges of another time: the small wooden lettered blocks that made up the language of movable type, a gigantic camera the size of a snowball stand, a suspended, second story level that probably provided work space for scriveners wearing garters on their sleeves and green eyeshades, perched on high stools and writing with quill pens for all we know.

In November 2008, Place de Lafayette, a local development company, bought the 1930s brick building, which faces Parc Sans Souci. The company owns several significant buildings in downtown, including the Cal-Chlor building, which once housed Mello Joy, then Café Bonjour before the coffee shop was transformed into Cal-Chlor’s office.

The construction arm of the development company started work cleaning out the detritus of the Tribune building in January, leaving 14-foot-high pressed tin ceilings, plaster walls, concrete floors and big windows overlooking the popular fountain in the park. By June, Place de Lafayette had rented out the first of four retail spaces to William Atkinson Jr., who opened Recycled Cycles, a new- and used bike shop.

“We had our eye on the building for a while,” Nugier says. “It is a significant presence in downtown.”

So when the “for rent” signs went up during the renovation process, the phone started ringing. “We had an idea about what sort of businesses we wanted to see in the Tribune building,” Nugier says, emphasizing that office space was not at the top of the list. “We saw retail, and particularly a coffee shop or restaurant.” The building has challenges. While structurally sound, it has minimal plumbing and wiring, necessities for a restaurant. Anybody who bought in to the history and architectural style would have to face an expensive kitchen build-out. That proved a deterrent of sorts.

The second business to sign a lease, two weeks ago, was Philippe’s Wine Cellar. Philippe Simon, owner of wine shops on Ambassador Caffery and on Albertsons Parkway in Broussard, wanted a presence downtown. Simon says he will offer the same selection of personally chosen wines, but plans to change up the business model a bit. Philippe’s downtown will open as a wine bar in November, designed more for tasting than imbibing.

“I’m not a bar,” he says. “Unfortunately there is no license for what I am doing — offering wine by the glass or a flight of wines, with a bit of cheese and charcuterie. It’s about wine education. You can sample some wine in a nice relaxed setting.” Simon will have a few tables in his new shop, a place to gather with friends on the way to dinner. He plans to stay open longer on weekend evenings as part of the downtown scene.

Last week, the final component to the Tribune complex fell into place. Justin Girouard, sous chef at New Orleans restaurant Stella, which just received a five bean (Times-Picayune restaurant critic Brett Anderson’s equivalent of a five star) review, signed a lease to open his own restaurant. The French Press will serve breakfast and lunch Wednesday through Sunday, and dinner Friday and Saturday nights. “During the day, the restaurant will be casual,” he says. “Dinner, though, will be a white linen atmosphere with more technical food.” Girouard dreams menu as he speaks. “Breakfast could be anything from eggs, sausage and toast to pancakes with nuts and berries or Eggs Scarlett — black bean jumbo lump crab cakes under poached eggs with a roasted tomato hollandaise sauce.” The breakfast menu continues through lunch, with the addition of soups, gumbos, salads and sandwiches like a cochon de lait on ciabatta. House-made ice cream, floats and milk shakes should beckon the mom and kid set, who gravitate to Parc Sans Souci’s fountain every afternoon.

Girouard, 28, and his wife Margaret are both Lafayette natives and St. Thomas More graduates. They didn’t really know one another until they reacquainted in New Orleans. Margaret will be running the front of the house.

Justin Girouard started off at Stella in 2000 as a part-time dishwasher while he attended classes at UNO. “I had no cooking experience,” he says. “But the cooks liked me and I eased my way in, learning on the job.” He decided he had a lot more passion for the stove than the classroom, dropped out of school, and worked his way up to the second-in-command position at the tony French Quarter restaurant. Executive chef and owner Scott Boswell opened another restaurant on Jackson Square, Stanley, a more casual, breakfast and lunch place. For the past few years, Girouard has worked in an administrative position overseeing both restaurants. But with two small children, the long hours were taking their toll on family life; Girouard decided it was time to cut back and move home.

Opening a new restaurant may not exactly give the chef more hours off the job, but the couple is thrilled about working together in their own place. They are excited about all the aspects of being back in Acadiana, from the raw ingredients that give local food its taste of place to the excitement of being part of a downtown revival.

Downtown Development Authority director Cathy Webre is delighted with the entire project as well. “This a significant step for downtown,” she says. “First of all the Tribune is an important building with its long-term place on Vermilion. And then add in the young entrepreneurs and the new energy. It’s great for downtown.”