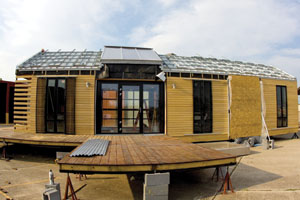 The Beausoleil Home is being decked out for a final bon voyage on Sept. 17 before it leaves for the Solar Decathlon in Washington D.C.

There are all sorts of misconceptions about solar panels. The current buzz is that they don’t really generate a lot of power, enough maybe to heat water or spin some ceiling fans. But take a turn around UL’s entry into the 2009 Solar Decathlon, the Beausoleil Home. Running on the sun is central air, an electric stove, a designer, two-drawer dishwasher, under-counter fridge and freezer, washer and dryer, a sybaritic shower, lights, ceiling fans, and a TV and computer that will ultimately download from LUS’s fiber-to-the-home.

It’s a pretty amazing engineering feat accomplished by UL’s engineering students and faculty. That the house is also beautiful and comfortable can be credited to the vision of the university’s architectural grad students and faculty. That the right brain and left brain members of the team didn’t kill each other over the course of the two-year project is due to Scott Chappuis.

A second-year UL architecture grad student and member of the eight-person Beausoleil team, Chappuis has acted as liaison between the two departments and the professional world. A typical example of his bridging the function-versus-form argument: the compressor for the air conditioner. The consulting engineers wanted it on the ground outside the building so it wouldn’t overheat. The students wanted it hidden inside the structure for beauty’s sake. Chappuis brokered a compromise. “We put it up under the roof but surrounded it with louvers so it can draw in outside air,” he says, in the quiet, focused way he comes up with solutions. “It can breathe, but you really don’t notice it.” Hidden solutions are the mantra for the Beausoleil House.

The Solar Decathlon, a contest dreamed up by the U.S. Department of Energy, is designed to call attention to the need to develop alternate sources of energy, and to engage innovation and experimentation through an international competition of top architectural and engineering schools. Ultimately, thousands of graduating architecture students worldwide will emerge into the workforce with expertise in sustainable design. It was an honor to be chosen in the first place, says UL architecture professor and Beausoleil faculty advisor Geoff Gjertson. Actually making the 20-team cut was like winning the contest. Each team selected to compete received $100,000 from the DOE for the project. The winner in October will take home a trophy and bragging rights, but Gjertson says his students have already gained a superb, hands-on education.

UL will be in some rarefied company when the house arrives on the Mall in Washington, D.C., Oct. 8 to compete. Teams from Cornell, Rice, Penn State, and Virginia Tech and other U.S. schools, as well as teams from Germany, Spain and Canada, make up the 20-contestant list. Up to 200,000 people are expected to tour the 20 houses over the course of two weeks, through Oct. 21, after the judging has been completed.

The criteria include running the entire house on solar-generated power while creating a pleasing and healthy environment, all within 800 square feet, the size of a small mobile home.

It has been as much like building a jewelry box as it has been like building a house. Cutting-edge technology had to be pared down to slip inside the walls, ceiling and floor, in a rubric that allows for references to vernacular architecture as well as compact contemporary design.

The little solar house speaks of its Louisiana heritage. The roof is a giant sun catcher, with 39 photovoltic panels, for providing electricity to the home, and one custom-designed flat plate solar thermal collector, which heats water. The solar panels are high-tech kin to tin roofs, and read the same way, even overhanging the walls to provide shade. The exterior walls are fitted with precisely hung cypress siding on a frame that allows airflow behind the boards, wrapping the house in a cooling air cloak beneath the wooden skin.

One of the most distinctive architectural elements is that the team included an old-timey “dog trot” breezeway through the middle of the house. With the kitchen on one side, living room, bath and bedroom on the other, the glass-walled breezeway can act as a dining room, or the glass doors can slide open, mosquito screen roll down to contain an interior porch, or the whole shebang can open to the air, mingling inner space with outdoors to create a whole lot more elbow room. Add on 1,700 square feet of wooden deck that surrounds the little house and you’ve got 2,500 square feet to stroll around in. Place the cypress planters, already green with sweet bay magnolia, ripening tomatoes and fragrant basil on the deck for an instant garden.

The Beausoleil architects spent a lot of time thinking like old school Louisiana builders, focusing on developing cross breezes in every interior space to cut down on energy demand. Toe-high panes correspond with high transoms to coax cross ventilation. When the weather won’t cooperate, a compact ductless air-conditioning system steps up to cool the house one room at a time.

Aesthetic touches are everywhere. The kitchen is surprisingly roomy with a full size stove, ipe or ironwood countertops, stainless steel appliances, and enough cabinet space to hold a healthy collection of gumbo pots. Hand-made cypress and translucent panel doors give the bathroom and bedroom privacy. Louisiana art donated by painters such as the late Elemore Morgan Jr., Bryan Lafaye, Kathy Reed and Steve Breaux will bring local color to the nation’s capital. Lafayette band Beausoleil will be on hand to create the Acadiana surround sound. And then of course, the UL contingent will draw its not-so-secret weapon. “Oh, yeah, we’ll be cooking,” says Chappuis. “I don’t know how Iowa State or the University of Arizona will feel about that.”

The Beausoleil House is holding a bon voyage open house on Sept. 17, from 6:30-9 p.m. for the public to come take a gander at our Solar Decathlon entry. The house is located at 216 Pinhook, in the parking lot of the United Way campus. The project is still looking for donations to help send a team of 26 students up to Washington to be there over the course of the 24-day duration of the competition. The total cost for transportation and housing of the house and its crew is $100,000. You can make a donation by going to the Web site at www.beausoleilhome.org , or call Geoff Gjertson at 278-2722.